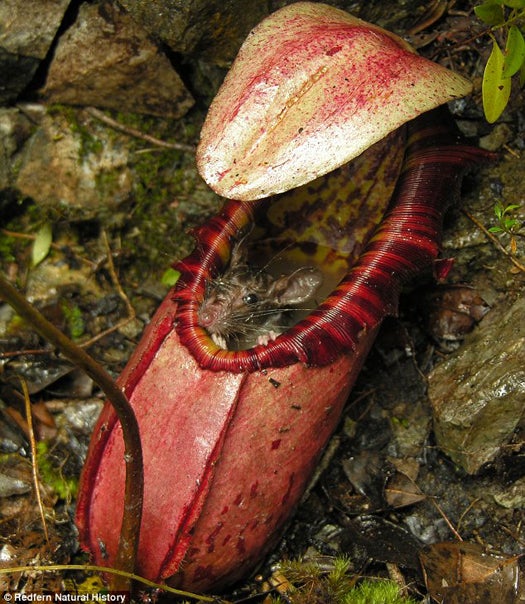 They need to start growing these in the NYC subways. via Stewart McPherson
SHARE

Deep in the jungle primeval, Nepenthes attenboroughii awaits its furry prey. But N. attenboroughii isn’t a stealthy cat or poisonous lizard. It’s a plant, and it eats rats.

Scientists recently discovered this new species of pitcher plant on the verdant face of Mount Victoria in the Philippines. It is the largest carnivorous plant ever discovered, and has been named after the famous naturalist and TV personality Sir David Attenborough.

Meat-eating pitcher plants were first described by science in the time of Linnaeus, but the previously discovered Nepenthes species stuck to small prey like insects and spiders — if an unlucky mouse or bird became a meal, that was a rare treat. But the giant N. attenboroughii is a vertebrate specialist.

The plant lures in the rats with the promise of sweet nectar. When the rat leans into the plant to drink the saccharine liquid, it slips on the pitcher’s waxy interior, and gets stuck in the gooey sap. Once it is trapped, acid-like digestive enzymes break down the still-living rodent.

To better explain the whole process, as well as the life cycle of pitcher plants, here’s a video narrated by none other than N. attenboroughii‘s namesake, David Attenborough himself.