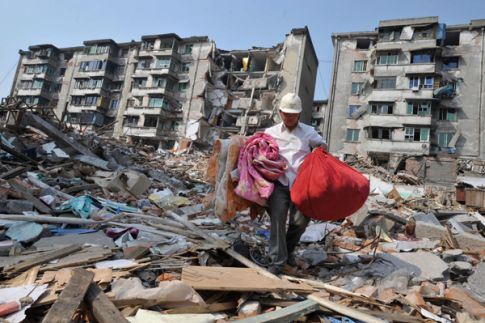 Disaster film director Roland Emmerich must be quaking in his boots knowing that his movies may soon have to be a little less destructive. With the invention of an “invisibility cloak” for buildings, earthquake damage could be significantly minimized. Using a series of concentric rings in the foundation of a building, this “cloak” directs seismic waves around a building, rather than destructively against and through it.

The cloak won’t save buildings from all seismic waves, just surface waves — waves that travel across the earth’s surface. The apparatus consists of a series of up to 100 concentric rings embedded under a building, each tuned to a certain frequency. That way, when surface waves come along, the rings that are tuned to that particular frequency will pick up the bulk of that frequency, and begin to vibrate along with it. These rings then arc the waves around the building, deflecting the shockwave and sending it off in another direction.

The theory has only been simulated and not tested experimentally yet, but once tested it could save untold lives and property damage. It might be that the only casualty will be earthquake movies: prepare for a rash of disaster flicks focused on supervolcanoes instead.