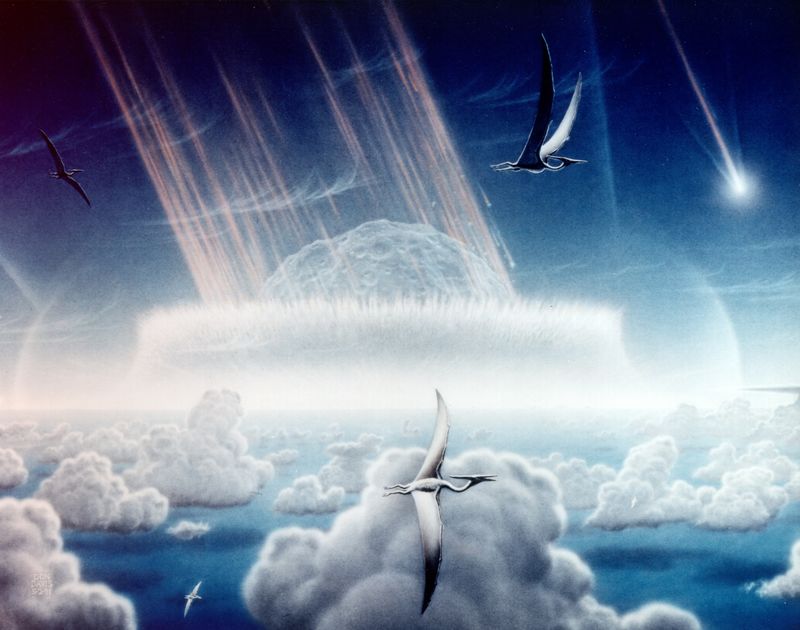 66 million years ago, an asteroid about 6 miles wide flamed across the sky and slammed into a sloping continental shelf, just off what is now Mexico’s Yucatan Peninsula. It collided with the force of 10 billion nuclear bombs and dug deep into the Earth’s crust, rippling through thick layers of stone and sand like a pebble slamming the surface of a lake, casting material from what was once solid ground high into the sky above.

Some of that material put a haze over the sun, chilling the planet and making plants and food scarce. That set into motion a chain of events that would kill all non-avian dinosaurs (we still have birds) and 75 percent of the species alive on Earth at the time. But it also paved the evolutionary way for the rise of mammals, humans included.

It was an extraordinary, planet-changing event. But just how unlucky did the dinosaurs have to be to end up wiped off the planet by some random rock from space?

Estimates put the likelihood of an asteroid the size of the Chicxulub impact crater hitting the Earth at about one in every 50 million to 100 million years. Given that the dinosaurs were around for about 175 million years, that means it was pretty likely that somewhere between one and three of those asteroids would have hit. But this one in particular caused a massive amount of destruction, and researchers think it’s because of where it hit.

In a paper published this week in Scientific Reports, Kunio Kaiho and colleagues say that only 13 percent of the Earth’s surface had the right composition to instigate a mass extinction.

Last year, in an article also published in *Scientific Reports8, Kaiho et al proposed that soot from obliterated oil reserves in the sediments near the target site was the primary cause of the drastic climate changes that occurred in the aftermath of the impact.

“The ratio of soot components at the Cretaceous/Paleogene (K/Pg) boundary marked by a mass extinction caused by an asteroid impact indicates a higher energy than forest fires, and the equivalence of molecular ratios at proximal and distal sites indicate a single source of the soot, which suggest that it was sourced from the target rocks of the Chicxulub asteroid impact,” Kaiho says in an e-mail.

But not everyone agrees. Geophysicist Sean Gulick also studies the Chicxulub impact crater, and is the co-lead of an expedition that last year drilled into the center of the massive dent.

“I agree with the concept that location matters when you think of an asteroid strike,” Gulick says. “It’s hard to create a global level extinction event without it being related to the climate.”

But Gulick hasn’t found evidence of hydrocarbon deposits in drill sites near the crater, and disagrees that soot alone could cause the devastation. “I fall on the side that it’s not a singular thing. There’s a huge range of possibilities that we’re testing and I don’t think it was a single punch.”

What the team led by Gulick and Joanna Morgan, a geoscientist at Imperial College London, has found are rocks that were formed in ocean environments—carbon-rich limestones, gypsum, and other layers of rock created by evaporating ocean water. Gulick and others believe that the asteroid impact, when it hit these stones, sent carbon dioxide and sulfur high into the atmosphere. A recent study found that based on evidence from the crater, cooling from the sulfur was probably very dramatic, and persisted for a while.

In that scenario, in addition to climate change, excess carbon could have changed the composition of the world oceans, leading to increased ocean acidification—leaving shells dissolving on the marine animals they protected. Gulick thinks that instead of soot from hydrocarbons, heated material from the collision ignited wildfires across the world, creating the soot layer that Kaiho and colleagues reference.

One thing that most researchers agree on is that location made the difference between this causing an isolated devastation and a mass extinction; 75 percent of all species on Earth died in the wake of the impact.

If the asteroid had slightly different timing, and had slammed in the Atlantic or Pacific instead, the materials flung into the atmosphere wouldn’t have been aerosols or soot, but rather a bunch of water vapor. While some surprised mosasaurs would have gotten the ride of [the end of] their lives, much of the rest of the world could have survived.

Kaiho estimates that only 13 percent of the Earth would have been rich enough in hydrocarbons to facilitate the type of disaster that killed off the ammonites, most foraminifera, and yes, a whole lot of dinosaurs. And while Gulick strongly disagrees with the hydrocarbon idea, he does think that only a small portion of the Earth’s surface would have had sediments loaded with the right materials to release the climate-altering gases that he and his colleagues favor.

More papers, many of them based on the cored of sediment gathered during the same deep-sea drilling expedition, are slated to come out in the coming months—and geologists and paleontologists are looking forward to discussing, disagreeing, and eventually getting closer to understanding what actually happened 66 million years ago.

“Stay tuned. This is going to be an exciting next couple of years,” Gulick says. “We’re going to have this great debate over what killed the dinosaurs, and 75 percent of life on the planet.”