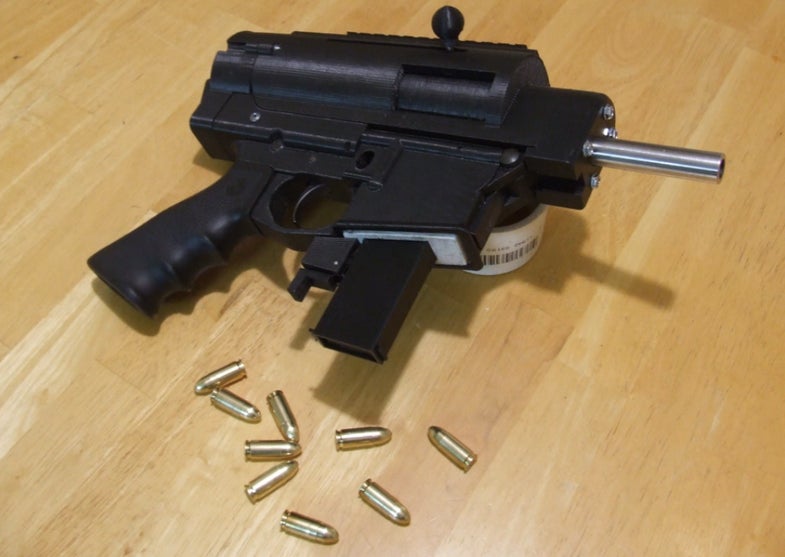 All 3D-printed guns are young guns. The weapon as a distinct category didn’t exist before May 2013, when Defense Distributed’s single-shot Liberator blasted them into existence. Before the Liberator, people printed parts and incorporated them into existing guns.

After the Liberator, designers expanded beyond its single-shot design. Now, a YouTube user with the handle Derwood is showing of a 3D printed semi-automatic weapon dubbed the Shuty-MP1.

Evolving from single-shot pistols to semi-automatics the first time took roughly 600 years, though with the existence of bullets and modern gun-making know how, it’s not terribly surprising people were able to make the transition for printing guns in just two and a half years. That means Derwood’s gun, made mostly of 3D-printed plastic parts, can fire an entire magazine of 9 mm bullets, ejecting spent bullet casings as it advances the next round into the chamber.

Still, in some ways, Derwood’s gun isn’t quite as impressive as the revolvers we’ve seen before. As Wired reports:

That makes the Shuty-MP1 in many ways like the partially 3D-printed guns that predate it, where a printer makes some of the parts and combines them with off-the-shelf models. And even then, this is more proof-of-concept, and not a weapon someone would actually want to use. According to Derwood, the plastic holding the barrel starts to melt after about 18 shots.

Watch Derwood assemble the gun below: