A 3D-Printed Autonomous Car With An Onboard Scout Drone 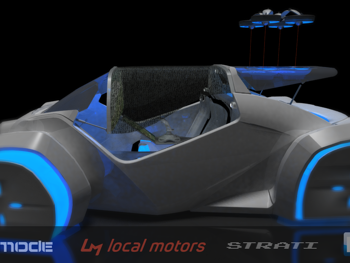 Local Motors, creator of 3D-printed cars like the Strati, teamed up with Mouser Electronics to sponsor the Essence of Autonomy Challenge. Competitors were to use the Strati as a starting point to create an autonomous vehicle, with engineer Grant Imahara as judge. The winning entry was Fly-Mode, an autonomous vehicle with a quad-rotor drone that can land on the vehicle’s rear deck.

But the drone doesn’t merely fly around scouting the landscape–or Los Angeles traffic, which Imahara fantasizes about in the video–as you drive. Its sensors transmit the drone’s position in the air to a computer on board the vehicle. That data is sent to pneumatic levelers under the seats, giving occupants the feeling of flying along with the drone. The drone’s cameras send high-definition panoramic images to the Fly-Mode’s inflatable screen for further immersion in the flying simulation. Occupants of the car can control the drone with a wireless joystick and navigation screen in the center console.

When all of the flying and camera work wear out the drone’s batteries, it uses optical sensors to return home to its landing pad at the rear of the Fly-Mode. The pad itself uses pneumatic levelers to help settle the drone in place as it lands. While the drone is charging, you can push a button to activate a vacuum that deflates the projection screen.

So how close to reality is this concept car? It’s been printed, and the body is being assembled. Then the motor and Mouser’s electronics will be incorporated, and finally all of the simulation actuators and under-seat pneumatics. The final step is the test drive, so stay tuned.