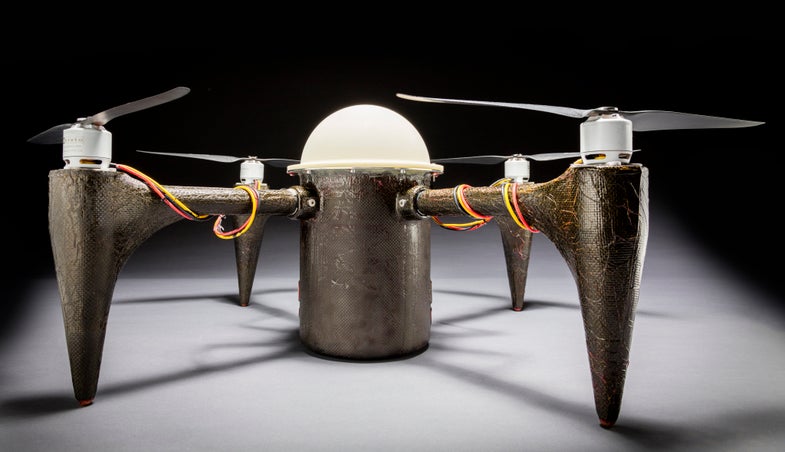 Under the sea, it lay dreaming. The body, printed from machines, sealed carefully, still functioned. It survived one month under water, then two. The salt did nothing to stop it. It simply was, a waiting state of being. And then, with a flick of a switch and a sent command, it rose from the depths, soaking wet and then suddenly in the sky.

Meet CRACUNS, or the “Corrosion Resistant Aerial Covert Unmanned Nautical System.” It’s a submersible drone, made by the Johns Hopkins Applied Physics Laboratory, designed to straddle the littoral space between unmanned aircraft and unmanned underwater vessels. It is also made for the littoral, that part of the ocean between the beach and the high sea. Parts of it are 3D printed, to create a watertight body, and other parts are coated in commercial sealant, to keep the water out from the engines. According to Johns Hopkins, its “low cost makes it expendable”, though given that the customer is the Pentagon, “low cost” isn’t that revealing a metric.

In tests, it survived two months under water, and was still able to fly afterwards. While there’s no payload specified, it’s easy to imagine a swarm of CRACUNS waiting near a beach before Marines land on it, and then emerging to scout overhead. Or perhaps, armed with a more sinister payload (read: explosives), CRACUNS could become a semi-mobile minefield, put in place temporarily and then removed after the danger has passed.

There’s a deep wealth of possibilities for a device like this. Watch the promotional video for it below, and see just how many Pentagonese buzzwords would can spot.: