Wonder if a statement is being made here Last year, Yoshitomo Imura was arrested in Japan for 3D printing revolvers. Imura designed the “zig-zag” pistol, and was sentenced to two years in jail for making the weapon. Thanks to the power of the Internet, hobbyist gunmakers shared his plans, and this week one fan announced the completion of a printed gun. It’s not the first 3D printed gun, but it is notable for its name: the ‘Imura Pistol’ v2.0.

Why print a gun? To quote Kurt Vonnegut, a gun is “a tool whose only purpose [is] to make holes in human beings,” and 3D printed guns can certainly do that (though multiple police departments warn that printed guns may hurt their makers by exploding when fired). In countries like Japan, the United Kingdom, or Australia, where there are strict controls on guns, people may choose to print the weapons as a way around the controls. But the 3D-printed gun community doesn’t just make the weapons because they can. The language gunmakers user to describe their weapons is not that of improvisers stumbling onto a solution. To read the forum and public pronouncements, printing a gun isn’t just making a weapon, it’s also making a free speech argument, one that combines the act of gun-making with an ideological challenge about freedom of information and file-sharing.

Cody Wilson from Defense Distributed created the world’s first 3D printed gun and posted them online. Shortly thereafter, the State Department ordered him to take down the files, citing export controls. Wilson saw that dispute as a battle against free speech. He is currently suing the federal government with help from 1st and 2nd Amendment lawyers, arguing that the code for plans to print guns is protected under the right to free speech.

The Imura pistol, made by user “WarFairy” at the 3D modeling community site FOSSCAD, is an eight-shot pistol based on Imura’s design. It takes .22 long rifle cartridges, which are commonly used for target shooting or hunting small game, but can also seriously injure humans. The Imura design has been in development for months, and it hasn’t been fired, yet. In response to a forum post about the Imura revolver at 3DPrint, WarFairy offers the rationale behind making the gun:

He also professes that that act of making guns is apolitical:

If WarFairy’s goal is pushing limits of 3D printing, then naming his gun after an arrested printer is perhaps a tribute, not to the gun-making itself, but to pushing the boundaries of technology. Perhaps. There are other gun printers out there, ones who weren’t arrested for their work. The work itself isn’t apolitical. It’s silly to imagine the naming is, either. 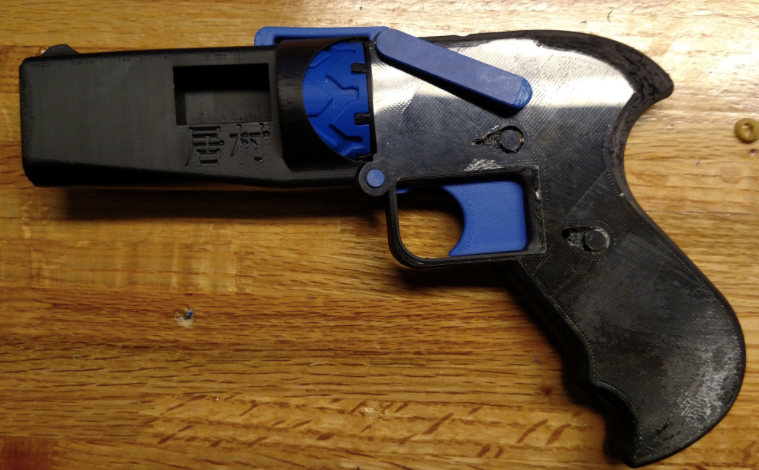