Inside the Atlantis Launch

On the occasion of the shuttle program's "crowning achievement," PopSci talks to the people who make it go up 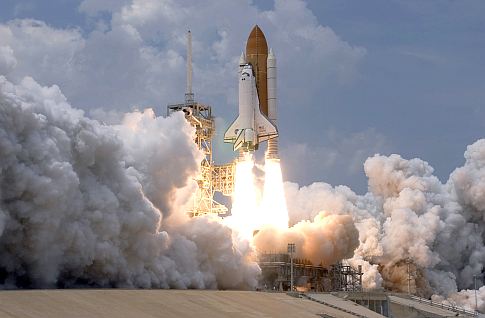 Jim Paulsen and his team of rocket scientists didn’t breathe for about 8 minutes the afternoon of May 11. Paulsen and scores of others were focused on watching the space shuttle Atlantis blast toward the heavens, carrying 7 astronauts and one of the most complicated and celebrated payloads in NASA history. As is the case with every launch, Paulsen doesn’t sigh with relief until the shuttle’s main engines, his baby for 25 years, shut down.

For people like Paulsen, vice president and program manager for the shuttle main engines at Pratt & Whitney Rocketdyne, every shuttle launch is a combination of cold mathematics, careful decisions, white-knuckle suspense and, hopefully, jubilation. But that’s especially true for this mission. Everyone involved in the launch knows the special importance of STS-125, the farewell trip to the Hubble Space Telescope and arguably one of the last great missions of the 28- year-old space shuttle program.

“Our ability to service it has allowed it to continue its active life and better our understanding of the universe. This is something special for us,” Paulsen said.

Like many shuttle contractors, Pratt & Whitney finds itself at the end of an era. Engineers and managers are already looking beyond the shuttle program to the future of human spaceflight in the form of NASA’s Constellation — PWR, as workers call it, is working on the J-2X engine that will power the second stage of the new Ares rocket.

While PWR will support the space shuttles until they retire next year, STS-125 is a triumphant, nearly-final hurrah for hundreds of people who have spent their professional lives making sure the shuttle lifts off safely.

“The Hubble is part of the leading edge in exploration, furthering our ability to understand the universe that we live in. All across the shuttle program, every person, to a man, is very proud of it, to say we were a part of history,” said Bruce McDavid, who leads the turbo pump team for PWR’s space shuttle main engine program.

The engines are some of the most complicated machines ever built. Their high- pressure turbo pumps could empty a swimming pool in under a minute and shoot the column of water 15,000 feet into the sky. One end of the pump operates at -425 degrees Fahrenheit; the other side, less than three feet away, reaches temperatures up to 2,000 F. The main combustion chamber, where all the propellants are burned, operates at 6,000 F — sufficient to boil iron. Together, the three engines generate 1.5 million pounds of thrust, an energy output equivalent to 13 Hoover Dams.

Many of the people who work on the engines have done so for more than two decades, which they say is a testament to the program and, frankly, the sheer coolness of rocket science.

“We all don’t leave because we enjoy it so much,” McDavid said. “The successes we’ve had with the shuttle launches and now with the Hubble are obviously very rewarding to us… Some of the more unique missions, like this one, that’s special to everybody.”

Al Daumann, manager of the engines program’s technical support team, is a backyard astronomer and runs an astronomy club at PWR. To him, the Hubble servicing mission has special meaning.

“Other than maybe building the station, it will be looked at as the crowning achievement of the shuttle program,” he said.

He and others at PWR spent most of the day Monday checking data, watching as the engines’ liquid hydrogen and liquid oxygen propellants filled the orange-colored tank, and verifying all the engine systems. Briefly, a hydrogen transducer that brings fuel into the engine sent an alarm signal, but engineers isolated the cause and told the crew not to worry because it wasn’t an engine problem.

Everyone deals with launch differently — some people cheer, some weep, some intensely monitor electronics and computer systems, and others, like Paulsen, just get quiet.

“It’s a very emotional and spiritual thing for me,” he said. The astronauts’ lives depend on the shuttle working safely, and contractors at orbiter-maker Boeing, booster-maker ATK and at PWR take that seriously. NASA has a visitation program in which astronauts and their families spend time with the people who build their ship, purposefully forging personal relationships. The rocket scientists want to make sure the astronauts have full faith in “their” engines. Once people get on board, it’s much more than a propulsion system.

“It’s been 50 years since President Kennedy challenged us to do the other thing, not because it was easy but because it was hard,” he said. “At last our launch has come along — it’s been a long time coming. Everyone has pulled together. We’re taking a little piece of all of us into space. At this point, all I’ve got left to say is, let’s launch Atlantis.”

The shuttle lifted off moments afterward. Eight and a half minutes later, everyone started breathing again.