Invention Awards: A Real-Life Babel Fish For the Speaking Impaired

The Audeo captures electronic signals between the brain and vocal cords and synthesizes clear, spoken words 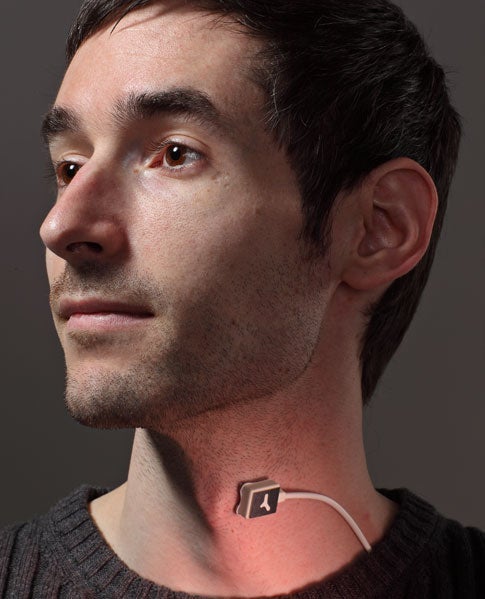 Electrodes on the throat pick up electrical signals between the brain and the vocal cords. John B. Carnett
SHARE

Today’s featured Invention Awards winner is the Audeo, a voice synthesizer that gives back the ability to speak to those with vocal cord or neurological damage. Be sure to check out the rest of 2009’s Invention Award winners here.

When Michael Callahan was 17, he lost his short-term memory when he hit his head in a skateboarding accident. “The neural pathways were all wrong,” he recalls. Within weeks, he was back to normal, but the incident left him thinking, how could he help people who had permanently lost abilities that most of us take for granted? Five years later, he came up with the Audeo, a tiny device that detects electrical activity between the brain and vocal cords and turns it into audible speech.

When we speak, three basic things happen: the lungs deliver air, the vocal cords vibrate to create sound, and the mouth moves. The Audeo helps people for whom at least one of the three processes malfunctions due to ALS, traumatic brain injury or other problems — those whose brains and vocal cords are intact but whose impaired motor skills prevent them from moving their lungs and mouth.

Here’s how it works: Three pill-size electrodes on the throat pick up electrical signals generated between the brain and the vocal cords. A processor in the device then filters and amplifies the signals and sends them to an adjacent PC, where software decodes them and turns them into words spoken through the PC’s speakers. By placing the electrodes on the neck and “speaking” silently through vocal-cord movements (but without moving the mouth), the wearer generates enough neural activity to trigger this chain of events.

Callahan started working on the Audeo at the University of Illinois, studying everything he could about signal processing and neuroscience. It took him four years to determine how to filter out unwanted electrical noise from the environment and the body (like the heartbeat) and detect only the signals needed for speech synthesis. He met his business partner, fellow engineering student Tom Coleman, in 2005, and the two formed Ambient
Corporation later that year. 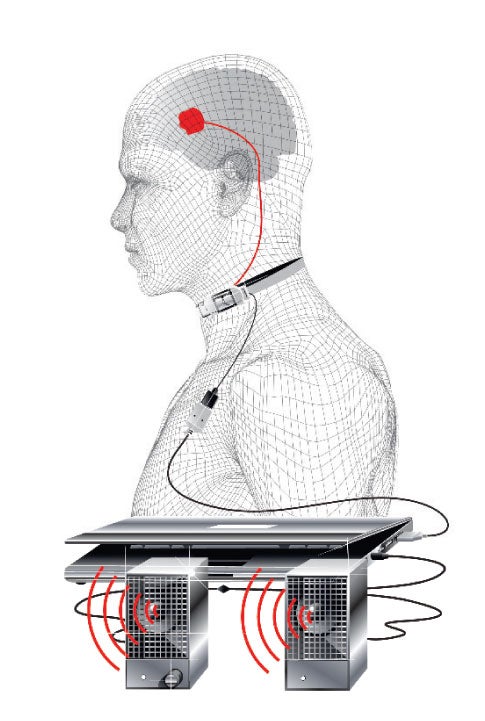 The Audeo: How It Works

Three electrode sensors on the user’s neck capture electrical signals between the brain and the vocal cords. The device’s processor sends the amplified signals to computer software, which decodes them and turns them into spoken words that can be heard through the speakers

Callahan isn’t the only one trying to perfect silent speech. NASA’s Ames Research Center is working on a similar device to control rovers and help astronauts communicate even when there’s significant distance or noise. That version, however, uses pattern recognition and can distinguish just preprogrammed words. The Audeo allows people to use all English-language phonemes (the roughly 40 sounds that make up words, like “aw” and “ch”), so there’s no limit on what a user can say.

The technology does have room to improve. Right now, the Audeo can pick up a maximum of 30 words per minute, about one fifth the rate of normal speech. And learning the “language” of speaking in phonemes takes days of practice. Once mastered, though, the Audeo can do neat things like enable people to carry on phone conversations without making a sound. Ambient is also working on a cellphone interface, with the goal of scrapping the computer completely and reducing the price. “Eventually,” Callahan says, “we want it to cost as little as a Bluetooth headset.”