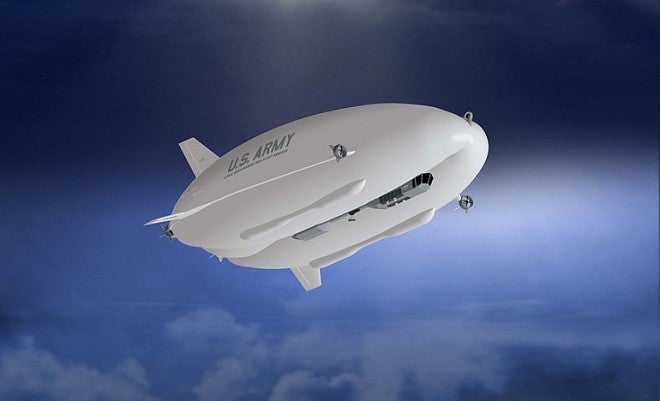 LAS VEGAS–Military personnel and defense contractors attending the year’s largest unmanned systems convention here awoke this morning to a bit of breaking robotics news unraveling thousands of miles away from their briefing rooms and exhibition booths. First lighting up Twitter and later acknowledged by the Army, the first flight of Northrop Grumman’s robotic Long-Endurance Multi-Intelligence Vehicle (LEMV) took place this morning in New Jersey, marking the first flight of one of the DoD’s next generation military airships.

And it’s no wonder the LEMV was the first of the Pentagon’s 21st-century airship to make its way skyward. It killed all the rest of them.

For the army, who is overseeing the LEMV program alongside Northrop Grumman, the flight marks something of a coup (there is a whole cadre of senior Northrop Grumman personnel here, by the way, and they aren’t saying a word about this thus far). When the DoD first expressed an interest into getting back into airships for extended intelligence, surveillance, and reconnaissance missions over Afghanistan and Iraq more than a decade ago, all of the usual suspects (Northrop Grumman, Lockheed Martin, etc.) began rebooting old airship designs and putting new ones on the drawing board. Some smaller companies jumped into the fray as well. A startup called Mav6 spent hundreds of millions building the Air Force’s Blue Devil spy blimp (and won a PopSci Best of What’s New in the process).

Lockheed’s P-791 design lived and then died back in 2006, pushed out of favor by Northrop’s LEMV design. Mav6 ran into some hardware problems but was millions of dollars into development and most of the way inflated for flight tests when the Air Force pulled the financial rug out from under the company. Only the LEMV remained, and given the Pentagon’s treatment of its competitors’ designs, its future was very uncertain. Its own inaugural flight has been pushed a number of times, and it seemed just as troubled as Blue Devil and Lockheed’s cancelled P-791 (Lockheed has reconfigured it as a cargo hauler for commercial use).

The video below suggests the Army hasn’t given up on LEMV yet (and perhaps that the Pentagon has picked a favorite–which is sure to rankle those defense contractors not named Northrop Grumman that spent years and millions developing airships that never got off the ground). And if it sticks by the LEMV, some think it could be in combat trials by next year, lingering over hostile territory and delivering uninterrupted streams of data to the ground for stretches of 21 days at a time.