A more elegant toothbrush, for a more civilized time 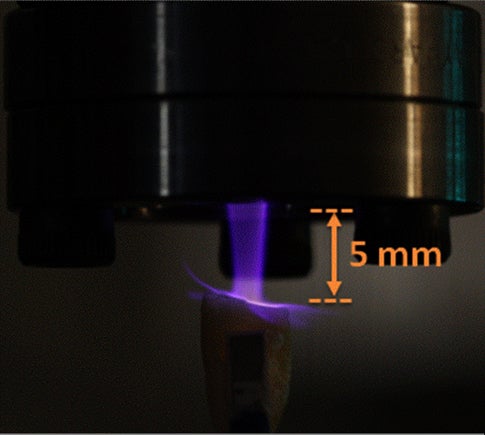 For those of you who think that sonic micropulses are the future of tooth care, prepare to set your faces to stun. Scientists at the University of Southern California (USC) have developed a tiny, cool, plasma blowtorch that breaks apart the sticky bonds that holds plaque to a tooth. However, unlike the hot plasma at the center of stars and lightning bolts, this plasma torch is no warmer than room temperature, as demonstrated here by an especially daring dentist.

Plasma, the forth stage of matter along with gases, solids and liquids, is a soup of ions and electrons. Like a cross between a lightsaber and Listerine, the plasma flame creates free radical oxygen ions that tear apart the plaque membrane and kill the bacteria. Even better, the torch is so fluid and adjustable, it can get to bacteria in the mouth’s most hard to reach places.

Because the device only uses short pulses of electricity, the gas in the flame ionizes without becoming hot. In fact, ten minutes under the torch only raised the temperature of the tooth by five degrees.

So far, dentists have only used the torch to sterilize a tooth during a root canal, but according to R and D, the creators already have some more uses in mind.

Unfortunately, the article doesn’t answer the most important question: when can I trade in my toothbrush for one of those!