Why are we lagging decades behind the rest of the world's fast-train infrastructure? 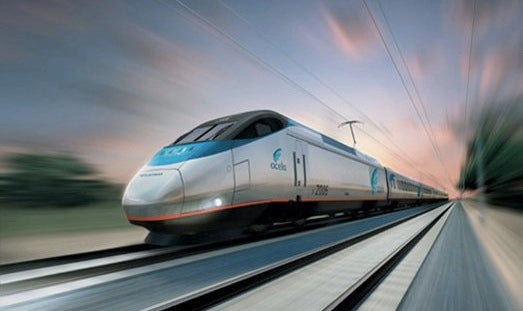 A few weeks ago, a train glided out of a station in Hangzhou, China, bound for Shanghai some 125 miles to the northeast. It arrived less than an hour later, cutting the usual commute time in half. Some trains on the line average 220 miles per hour, making it the fastest daily train in the world.

A month before the Hangzhou-Shanghai line was anointed, Amtrak rolled out its own grand vision for the future of high-speed rail in America: an upgrade that will increase average speeds between Boston and D.C. to 148 miles per hour – just two-thirds the speed of China’s new line – and not until 2040.

Questioning why America is so far behind Europe, China, and Japan in passenger rail technology is a pastime among high-speed advocates, but it’s not really productive. There are more important, forward-looking questions that need asking: Will true high-speed rail even work in America, and if so are we deploying it in the smartest ways possible?

The answers, respectively, are “maybe,” and “probably not.” There probably are places where trains topping 200 miles per hour make sense, but those places are not leading the national conversation. Instead, the northeast corridor – the largest passenger rail market in the nation – has taken center stage even though there are few places in America more ill suited for super-fast surface trains.

“Amtrak is going to set its sights first on the northeast because that’s its cash cow, but where the Federal Railroad Administration could really help out is taking rail to the next level in other parts of the country,” says Dr. Leslie McCarthy, an assistant professor of civil and environmental engineering at Villanova who works closely with the Transportation Research Board.

Why not make the densely packed, train-savvy northeast corridor the model for blistering fast next-gen American rail? There are a variety of reasons – history, politics, unchecked urban sprawl – but simply put, it’s not practical. America suffers from something of a high-speed rail quandary, in which the places that want true high-speed rail the most can’t have it and the places where it’s most feasible can’t support it.

Unlike Europe and Asia, where the dividing line between urban and rural is far more defined, the northeast corridor is the definition of urban sprawl, with populated cities separated by endless suburbs and smaller burgs that all want access to the train. To bullet trains, sprawl is anathema.

“The very high speeds that China is achieving can be obtained only if you space the stations far apart because it takes time to accelerate and decelerate the trains,” says Ken Orski, a career urban transit expert who served in the Nixon and Ford administrations and is now publisher of Innovation NewsBriefs, a widely read transportation policy newsletter. “If you space those stations very closely you lose the technological advantage of high speed.”

Basic physics and human physiology dictate the limits to how fast a train can gather speed or slow down. The intercity distances – from Washington to Baltimore, Baltimore to Wilmington, Wilmington to Philadelphia, Philadelphia Newark and on to NYC and so on – are all short hauls, too abbreviated to take advantage of bullet trains’ top speeds. That’s not even taking into account all the street crossings, which hinder both automobile and train traffic along the route. Take all that into consideration, and 150 miles per hour is probably about as fast as northeast corridor trains can hope for.

Therein lies the aforementioned quandary: In the northeast corridor, there is enough demand to support an investment in next-gen high-speed rail, but bullet trains simply aren’t practical there. And, as Dr. David Levinson, associate professor of transportation engineering at the University of Minnesota, points out, in more wide-open places like the Midwest where true, 200-plus miles per hour high-speed trains have room to run, populations often aren’t dense enough to justify the trains. “The cost side of this is very high,” Levinson says. “And outside of the northeast corridor and a few other places, the benefits are relatively low, so there are limited places where you have enough demand to support passenger service.”

Of course, if Amtrak really wants to roll out China-magnitude trains in the northeast it could simply eliminate stops between major cities. But where trains go and where trains stop is a political issue, and nothing is so effective a destroyer of a potential public good as politics. High-speed rail tends to enjoy hot-button-issue status in the places where it’s an issue at all. In other places, it’s not even on the political radar.

“Fifty or 60 years ago, Eisenhower knew the value of the Interstate highway system,” says Jose Holguin-Veras, a civil and environmental engineering professor at Rensselaer Polytechnic Institute. “All the governors were clamoring for it. Who is speaking about this? There are some governors, there are some senators, but it’s not an agenda item.”

Where it is on the agenda, it’s often a divisive issue at every level. Local officials are happy to get on board as long as their constituencies – regardless of size or significance – get access to the rails by way of a train-slowing station stop. Then there’s politics at the state level, where attitudes shift with the election cycle. For instance, both Wisconsin and Ohio had aggressive plans to improve passenger rail prior to the recent gubernatorial elections; now, new governors in those states have vowed to scrub the costly projects.

But the money comes from the federal level, and that’s where American democratic politics introduce obstacles that centralized countries like China don’t have to deal with. “It’s hard to get national support for a localized system,” Levinson explains. “In order to get national support you have to build stuff everywhere, which dissipates all the benefits you might get if you did just one good thing.”

To build the northeast corridor to Amtrak’s vision would cost roughly $400 for every person in the United States, the vast majority of whom would never ride the train. It’s difficult to sell that kind of spending in Congress. Levinson opposes the deployment of high-speed rail in the U.S. for exactly this reason: the costs are astronomically high and the benefits relatively low for most people. To him, spending tens of billion of dollars chasing the last century’s technology simply doesn’t make sense.

It’s a valid point. At the current pace of innovation, technological improvements in automobiles and aircraft – or trains, for that matter – may leapfrog wheel-on-rail train tech completely, easing congestion and moving people more efficiently without laying an inch of track.

But not everyone shares that argument.

“Let’s say in the next 30 years we really take our technology to the next level and cut our congestion in half,” McCarthy says. “We’re still looking at some real inefficiency on our highways.” She sees potential for bullet trains in places like the Midwest where intercity rail can be competitive with both driving and short-haul flights. Rensselaer’s Holguin-Veras agrees, citing air traffic congestion on top of highway inefficiencies.

“From an economic point of view, it doesn’t make any sense to use air for all these short trips,” he says. “The demand for these short trips is very, very high, and if you crowd the airports with all these short flights, airports must continue to expand. Over short distances, high-speed rail can move thousands of people in one shot.”

Orski, approaching the issue with his years of government experience in transit policy, takes a less-optimistic stance regarding high-speed rail’s real value to America. “You’ve got to find the proper kind of situation,” he says. “You need to find cities that are not too closely situated but also cities that are large enough to provide the ridership to make it an economic venture. There aren’t a lot of places like that in America.”

The consensus seems to be that real, 200-plus-miles-per-hour high-speed rail is within reach in America, but only in situations where the distance, population density, demand, and dollar signs all line up like some kind of rare astronomical event. Those situations are far fewer that one might guess by looking at the number of rail projects seeking federal funding.

If America really wants to see super-fast passenger trains connecting its cities within a generation, it needs to be both realistic and efficient – find those few places where laying dedicated, high-speed track is economically viable and concentrate its billions there. Otherwise, the lackluster northeast corridor plan will remain the height of America’s rail ambitions, rolling out 20th century tech while the rest of the world goes screaming past.