Sports Bras Could Save Horses’ Lives

I’m not a gambler, but YouTube videos of horse races are my Monday Night Football. Always rooting for the underdog... 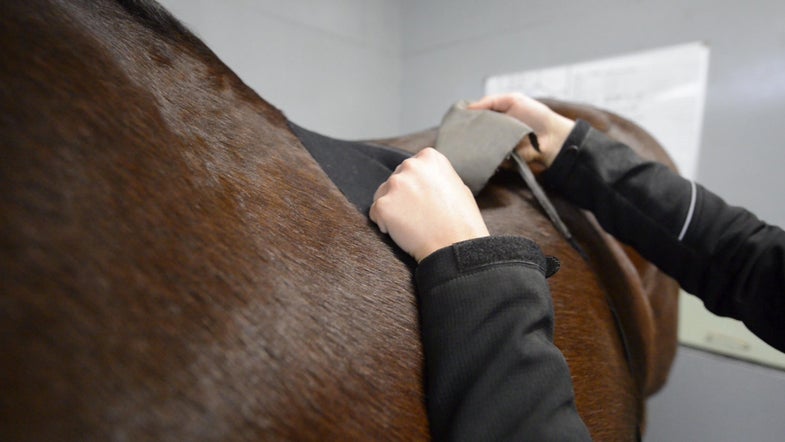 I’m not a gambler, but YouTube videos of horse races are my Monday Night Football. Always rooting for the underdog (i.e. the one with the weirdest name), I love watching them pound down the backstretch at highway speeds to win by centimeters. Tragic losses are just as heart-rending. Maybe it’s their power, or their lack of it at the command of their jockeys, but horse-racing gets to me way more than human racing. (Why does “human racing” suddenly sound so barbaric?)

Probably the most devastating horse race of all YouTube–the one I queue up when I’m in need of a good weep–is the 1990 Breeders’ Cup. Go for Wand (see? weird name) leads pretty much the whole way. One by one the other horses drop off as Go for Wand and Bayakoa gallop furiously past the poles. As they round the final turn, Go for Wand edges her nose ahead. Her kick is starting. It looks like she might win, but it’s a nail-biter. Then, in a second, she crumples, rolls tail over head, her jockey thrown to the infield. It’s so sudden you’re not really sure what happened until you see the horse scramble to vertical, three legs hobbling toward the finish line, a fourth graphically dangling like an empty sleeve. She was euthanized on the track moments later.

Professional sports–all species included–are synonymous with injury. As has recently been mentioned in the midst of the NFL concussions lawsuit, training to be a professional athlete is a fine line between being in peak physical condition and being broken. It’s the same for Thoroughbred horses, but they can’t voice when they are too tired to work out, or when they’re feeling sore. In the past, trainers could measure horses’ heart-rates and generally gage their well-being after a workout, but when they’re running at upwards of 35 miles per hour it’s impossible to tell how they’re feeling. A group of university researchers in Australia is now using technology developed for monitoring pro athletes (human ones) to get enhanced bio-feedback on horses in motion.

“Riders and trainers are looking for ways to improve the performance. The racing industry wants to study the pulse in an as easy a way as possible,” said Johanna Ternstrom, a master’s student at the University of Gothenburg and Chalmers University of Technology working to develop smart textiles for equine sports. The idea, Ternstrom said, came from technology already in use in sports bras and chest bands that monitor our pro athletes’ heart rates, with one tricky difference: “Humans don’t have fur.” Ternstrom uses similar commercial fabrics that stretch and wick sweat and her sensors must be just as small and flexible, but they have to pick up a heartbeat and respiration patterns without direct skin contact. “At the moment, two different types of smart textiles have been used on horses,” she explained, “One of them is a textile ECG sensor that can measure heart rate, heart rate variability, etc. The other textile is an elongation sensor. At the moment we are using this textile to study if the girth on the saddle contracts the muscles around the horse’s chest. It actually seems like our sensors could be used in human healthcare as well, enabling measurements through a person’s clothes.”

This kind of monitoring promises to greatly reduce overtraining injuries by offering up direct feedback on the bodily stress a horse is experiencing–something trainers often try to push through. In a recent interview with The Washingtonian, Stuart Janney III, the owner of 2013 Kentucky Derby winner Orb, said, “I think the problem with the Triple Crown is that for so many people, they simply want to get there, so they overlook the little aches and pains, the little immaturities, or whatever it is about the horse.” Since a horse can’t complain, trainers are quick to overlook a limp in the face of exorbitant prize money.

Being in the national–er, international–spotlight has the same effect on human athletes. Even though Nike is widely considered at the top of the smart sports gear field, Adidas just came out with one of the coolest products to reduce overtraining injuries in recent years. After years of testing with professional soccer teams around the world, they released their “MiCoach Elite Team System” in July 2012 and started rolling out toned-down consumer versions this October. I called up Qaizar Hassonjee, VP of development and commercialization for Adidas global wearable sports, to figure out how this schmancy system works.

Like with horses, Hassonjee said “It’s hard for a coach to know how all of his players on the field are feeling at once.” With the Elite Team System, a shirt or sports bra with a sensor embedded at the back of players’ necks sends real-time data to the coach’s iPad on the sidelines, telling him which players are most tired, when they’ve reached a preset heart rate goal, and other vital stats. “They can understand the condition of every player,” said Hassonjee. “If they’re getting fatigued you can give them rest so they don’t get injured, but it can also reduce overtraining.” Since debuting at the 2012 MLS All-Star game, all 19 MLS teams have adopted the system.

The sensors are admittedly pretty bulky in this preliminary stage, which could definitely be a turn-off to pro athletes, but Hassonjee says they hope to make them completely undetectable. And they’re on the right track; Adidas purchased Textronics Inc. in 2008, a company whose tagline is “Energy-activated fabrics”. One of their most relevant products is the NuMetrex sports bra, which has tiny heart rate monitoring sensors built into the band, but it looks like the tricky part will be slimming down the 1995-desktop-computer-tower-sized hub that delivers the data to the coach’s iPad app.

Ternstrom’s smart textiles are, so far, pretty rudimentary too, but they’re already helping companies that produce bridles and saddles develop equipment that is more comfortable and less taxing on horses. For Hassonjee, he hopes Adidas’ Team System can translate to consumers and inspire researchers like Ternstrom to adapt it for even more uses. “Right now everyone is more interested in monitoring fitness and well-being,” he said. “You see a lot of devices measuring activity, but the challenge is to interpret that so it’s understandable and relevant.” If a sports bra—or saddle band—is comfortable and its data is clear, Hassonjee said, every athlete will train safer and perform better.