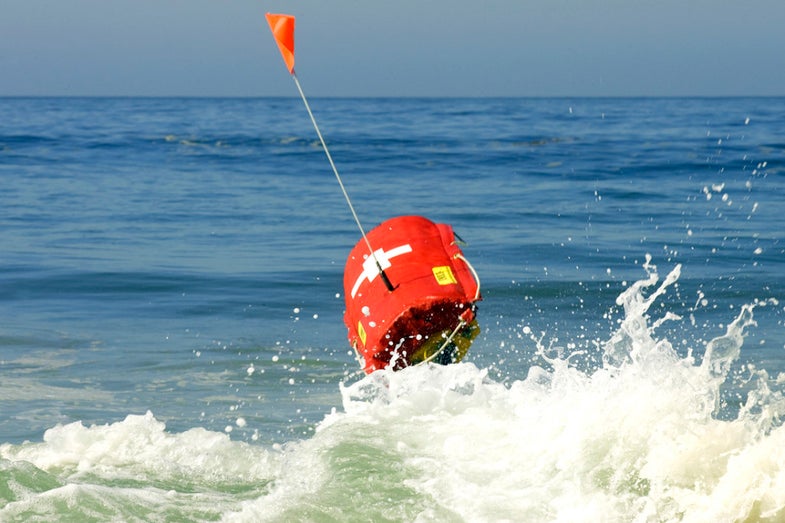 Pushed into water, the robot looks like nothing so much as a giant carrot, puttering about a vast ocean. Named “EMILY”, the machine is a tethered and remotely piloted life preserver, designed and built by Hydronalix. The name awkwardly stands for “EMergency Integrated Lifesaving lanYard”, and we praised an early version of the product in 2010 as the Best Of What’s New. Now, to help save refugees on capsizing boats in the Aegean and Mediterranean, Greece’s Coast Guard is testing the robot rescuers.

The robots made their way to Greece through the Center for Robot-Assisted Search and Rescue at Texas A&M University and the work of Roboticists Without Borders. As Wired reports:

The EMILY robots can pull a rescue line up to 2,400 feet, and can carry up to five people. Once the people have grabbed one, that tether can be reeled in and the people safely placed onboard a seaworthy vessel. EMILY’s batteries only last about 20 minutes, but they can be swapped out easily, allowing more trips to sea.

Just over four feet long and with a top speed of 22 mph, EMILY is jet-powered in the same way as a jet ski. It has a five-foot tall flag, letting its operators see it from above the surface.

Rescuers have used EMILY robots before, in very different circumstances than Greece. The director of the center, Robin Murphy, wrote in a blog post:

The team is visiting the island of Lesvos for ten days, testing EMILY together with tethered camera-carrying quadcopters as tools to help in maritime rescue. They also hope to raise enough funds so that, after the team leaves, they can leave an EMILY behind. That will take this mission from proof of concept to permanent rescue installation.