Trains Could Use Lasers To Blast Leaves Off Track

Why rake ‘em when you can burn ‘em 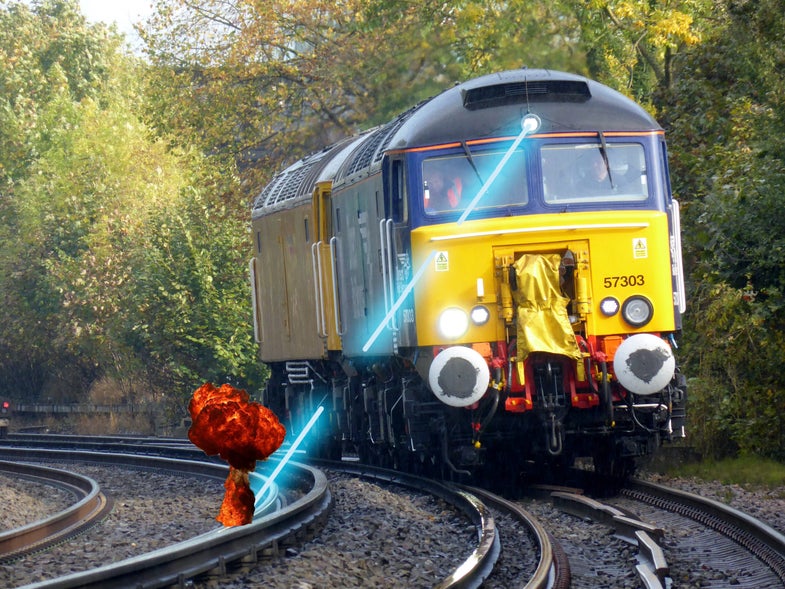 Autumn: It’s a time for cool, breezy weather, pumpkin spice lattes, and the buildup of colorful tree leaves on the ground. While many enjoy the picturesque leafy exodus, there are some who don’t always look forward to the yearly ritual – notably railway companies.

During the fall, tree leaves drop and gather on train tracks throughout Europe and North America, which can lead to serious problems for railways. Gathered leaves get wet from rainfall and then are crushed by train wheels, which turns the leaves into a hard, Teflon-like substance that coats the rails. The residue makes it harder for train wheels to grip the rails, which means trains have to move more slowly to be safe and to make sure their wheels don’t slide on the rails when the train is slowing down. The precautions can cause some pretty lengthy delays for passengers.

So what is to be done about leaves on the line? Last month, Dutch Railways tested out their Laser Railhead Cleaner, a device that’s positioned under the train just in front of the wheels and angled downward. The LRC issues a series of laser pulses, which heat the organic material in leaves and then vaporize them as the train passes overhead.

The preferred method of clearing leaves from tracks nowadays is through the use of water jets or jets filled with sand-gel mixtures, but these can damage rails in the process. According to the Dutch scientists behind the LRC, the laser system won’t damage the tracks or any other infrastructural objects nearby. And as an added bonus, the lasers help get rid of rust and keep the rail dry, preventing more leaves from sticking in the future.

No word on what would happen to a passing mouse or rabbit, but I’m assuming the outcome can’t be good.