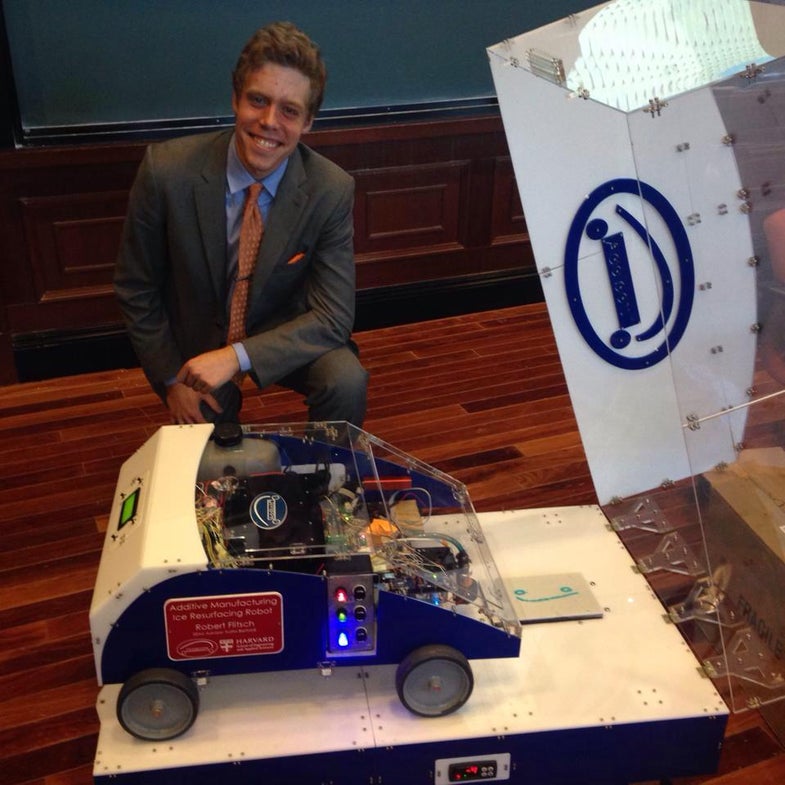 In the future, your local public works department might use a small, wheeled robot to repair potholes on city streets—assuming this recent Harvard graduate’s idea gets funded.

Robert Flitsch is the inventor of the Addibot, a 3D-printing robot that uses raw material to build surfaces up layer by layer, much like a boxy, desktop 3D printer would, but without the same space constraints. It can steer itself, or be driven via remote control.

“One of the main limitations with 3D printers is you typically have it printing inside this box, and you can really only print objects of the size of the workspace you’re printing in,” says the 22-year-old Flitsch, a mechanical engineer who graduated from the Harvard John A. Paulson School of Engineering and Applied Sciences last May. “If you take additive manufacturing implements and make them mobile, you can print objects of arbitrary size.”

Underneath the chassis of an Addibot is an array of nozzles that, ostensibly, would lay down materials as needed to repair a variety of surfaces. Flitsch, a longtime hockey player, first tested his Addibot on ice, the idea being that such a robot could deposit water, with a temperature just above its freezing point, into the cuts made by skates on hockey rinks, and then freeze once coming into contact with the ice surface. So long as the width of the print array accurately represents the crack or hole the Addibot is passing over, the repair work could be done at a constant speed “on the order of a few miles per hour,” says Flitsch.

An array of nozzles would lay down materials to repair a variety of surfaces.

How an Addibot would lay down tar to fix damaged asphalt is a trickier conundrum; that is what Flitsch is currently grappling with.

“All the storage for material, all the chemical processing could be done on board the Addibot,” he says. “Tar materials, which have to be kept at a high temperature, can be done in a tank with a constant heat source added to it. Power sources could be various kinds, depending on the size of the robot.”

Some obstacles stand in the way. Keeping dust out of what the Addibot prints is a priority, since dust has a tendency to mess up 3D prints. Flitsch says he’s working on incorporating a post-processing mechanism into the Addibot undercarriage that could ameliorate any problems dust might cause.

And while Flitsch has developed a working prototype, he needs funding to continue prototyping with different printing materials. But by taking additive manufacturing technology and making it mobile, Flitsch thinks a team of Addibots could print objects of any size with an array of materials.

“The only way that I see Addibots being limited is in whatever materials we can think up to use,” he says.