Who Will Save This Gloriously Strange One-Eyed Aircraft? 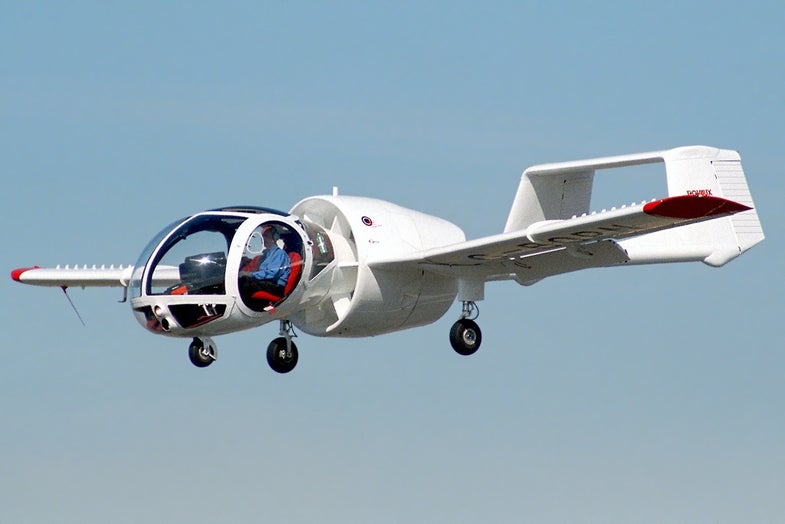 No, it’s not a prop from a James Bond movie. But the Edgley Optica is undeniably one strange, beautiful bird. First flown in 1979, the British-made aircraft looks like an eyeball stuck on the end of a plane. With a giant ducted fan behind the teardrop-shaped, window-filled cockpit, it still looks like the future, almost 35 years after its first flight. This week, the Optica is at the Paris Air Show, and its creator is making “one last push” to get the aircraft back into production, presumably by finding a sponsor or big buyer.

With a maximum speed of 132 mph, a range of 650 miles, and a maximum altitude of 14,000 feet, the Optica is by no means the most advanced surveillance aircraft ever made. In many respects, its numbers look worse than those of drones like the Predator or Reaper. But those million-dollar warplanes are the wrong reference point. The Optica is designed as a cheap, helicopter alternative — a three-seat plane that offers tantalizing views for its human passengers. Watch one fly below:

In 1980, a Popular Science writer flew on one of the original Opticas, noting that the plane was impressively quiet and low maintenance. Only 25 of the planes were made, and some found use in police or fire departments in Europe. One, used by Englands Hampsire police, crashed in the early 1980s, and eight others were destroyed in fire, thanks to arson in the late 1980s at the Optica production plant. While the police crash was ruled the fault of the crew and not the plane, the crash combined with the arson scared away buyers.

Optica creator John Edgely has been looking for willing buyers for decades, and the appearance at this year’s Paris Air Show was designed to drum up interest in the craft. Assuming it remains cheaper than a helicopter, the Optica definitely offers better onboard views than a drone. If it finds a buyer or sponsor, it might earn a place as an idyllic alternative to unmanned surveillance machines.