Does a machine that makes gun parts count as an unmarked weapon? 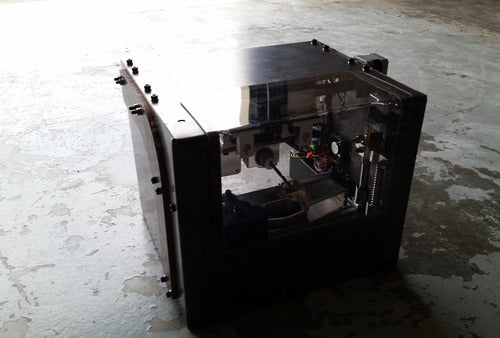 Exactly how much of a gun is a machine that makes untraceable metal gun parts? That’s a question FedEx wrestled with, as they debated whether or not to ship a machine milling tool developed by Second Amendment advocates Defense Distributed.

Defense Distributed is used to being in legally ambiguous areas. In 2013 they made the world’s first completely 3D-printed gun, a single-shot pistol named the Liberator. Because the gun is almost all plastic, the gun makers inserted a metal bar into the handle, so that the gun wouldn’t violate laws against undetectable firearms. The files to print the Liberator allow the printing of the gun without the metal bar, and because these files were shared online, Defense Distributed ran afoul of the U.S. State Department.

What if, instead of just distributing the files to print a gun, someone sold a machine that could make one? The Ghost Gunner milling machine is a provocative attempt to answer that question. Milling machines turn metal into objects in the same way that sculptors make statues out of marble: they remove material until the finished product is all that’s left. Milling is used to make a variety of tools, but as its name implies, the Ghost Gunner’s main function is to make guns. That’s what FedEx has a problem with, though it’s a bit more complicated than that.

Legal restrictions on shipping guns don’t apply to shipping incomplete parts. An 80 percent complete lower receiver–that is, the segment surrounding the trigger that contains the gun’s moving parts and (importantly) its serial number–can be shipped without legal restrictions. But the Ghost Gunner turns incomplete lower receivers into functioning gun parts without serial numbers, meaning the guns it creates won’t be documented or traceable by law enforcement. That’s particularly important since the mill can manufacture lower receivers for weapons like the AR-15, the civilian version of the military M-16 assault rifle. None of this is illegal, per say, but there’s a clear air of confrontation to the project.

FedEx decided against shipping the Ghost Gunner, adding a new twist to the strange world of personal firearms assembly.