Lasers can be powerful weapons — they can take down an aircraft at long ranges and in unstable conditions, for... 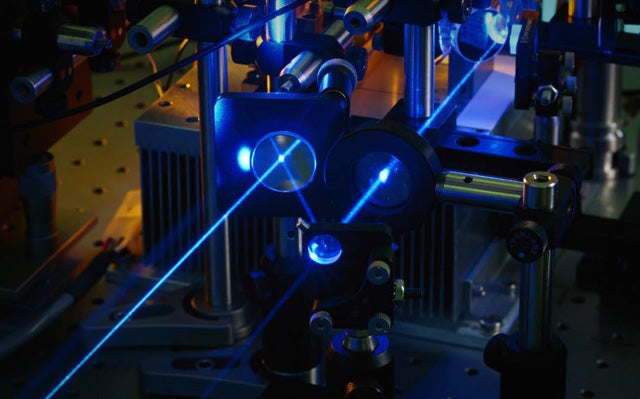 Lasers can be powerful weapons — they can take down an aircraft at long ranges and in unstable conditions, for instance. But they are hampered by power and size limits, so they’re not widely used by the military (yet).

Lockheed Martin has a solution: a fiber laser that basically works like a backward prism.

Lockheed is among three firms recently awarded contracts to develop a laser for the military’s Robust Electric Laser Initiative, which seeks to improve the power of electric lasers. Fiber lasers are efficient and compact, but until now they have been weaker than other types, like chemical lasers. The RELI program seeks to improve laser strength while reducing power and cooling, so systems can be small enough to install on ships or airplanes.

A Lockheed subsidiary developed a first-of-its-kind high-powered fiber laser capable of producing 100 kilowatts or more, according to Lockheed. It uses fiber optics to produce near-perfect beams. The method also confines the laser light to the fiber’s glass structure without using mirrors or other optics.

John Wojnar, director of business development for the laser systems business, said in a September issue of Aviation Week that it works like a inverse prism: lasers with slightly different wavelengths enter a combiner, and the result is a single, focused beam. It’s called Spectral Beam Combining.

Lockheed won an initial $14 million contract from the US Army Space and Missile Defense Command to develop the system. Along with General Atomics and Raytheon, the firm must demonstrate a 25 kW system that can be scaled up to 100 kW within five years.

General Atomics will improve its Hellads distributed-gain laser approach to improve efficiency, while Raytheon will pursue a planar waveguide laser, according to Aviation Week.

Northrop Grumman is also expected to obtain a RELI contract.