Human Rights Watch has released near-infrared satellite images confirming the destruction of the town of Abu Jeradil and surrounding villages... 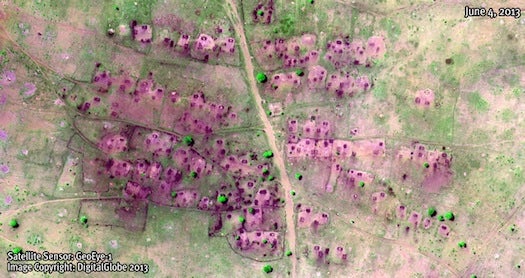 Human Rights Watch has released near-infrared satellite images confirming the destruction of the town of Abu Jeradil and surrounding villages in Central Darfur. The April 2013 attack is believed to have killed 42 people and burned 2,800 buildings—88 percent of all buildings in the area.

According to Human Rights Watch, villagers who fled the area said in May that the attackers were Sudanese government forces, including a militia leader sought by the International Criminal Court named Ali Kosheib.

The satellite images are shown in false-color near-infrared to highlight fire burn scars and building damage.

“Satellite images show the total destruction of villages during the April attacks in Central Darfur,” Daniel Bekele, Africa director at Human Rights Watch, says. “How can the Sudanese authorities claim there’s nothing they can do when their own security forces were involved and the war crimes suspect Ali Kosheib is on the loose?”

Human Rights Watch has called for the Sudanese government investigate the abuses and prosecute those responsible, as well as to surrender militia leader Kosheib to the International Criminal Court in The Hague.

Satellite technology is helping human rights groups confirm attacks on civilians and dispute government denial of human rights abuses. In May, satellite photos undermined the Nigerian Army’s claim that it had only destroyed 30 homes, showing instead that 2,300 houses had been burned. In Syria, data mining has helped activists track casualties amid the confusion.