How flushing your toilet could help create biofuel

A new process emulates the way crude oil forms naturally— in only 45 minutes. 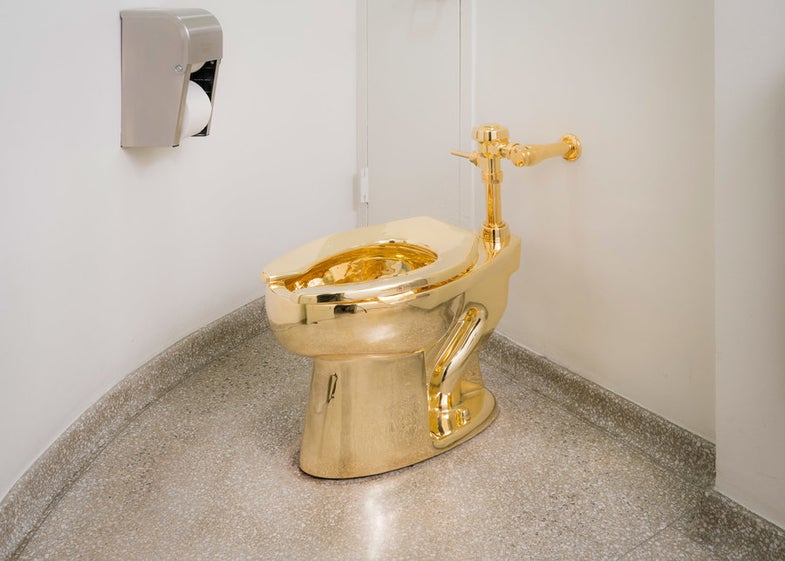 Picture a giant toilet bowl looming larger than life outside the UN headquarters in New York. It sounds like an absurd scene, but the stunt from three years ago was not a childish prank. It was a serious statement to mark the first World Toilet Day and raise awareness of the fact that one third of the world’s population lacks access to toilets.

Addressing the global sanitation crisis is a top priority among the UN’s Sustainable Development Goals, and it now has an exciting solution.

In fact, science may soon make your toilet bowl a viable alternative energy source. Your flushes can produce two or three gallons of biofuel per year when the wastewater is treated using a process, developed scientists and engineers at the Department of Energy’s Pacific Northwest National Laboratory, called hydro-thermal liquefaction (HTL).

HTL emulates the way crude oil forms naturally, when biomass decays under high pressure and heat for millions of years — but it only takes 45 minutes.

Research engineer Justin Billing says the technology works with any wet organic waste materials, such as sewage, algae, feedstock, or animal manure. These were once considered poor sources for biofuel because older processes required drying them out, but this does not. All it takes is pressure and heat — you must bake the material at 660 degrees Fahrenheit.

James Oyler, the President of Genifuel Corporation acquired the license for the technology and plans to put it to good use. He focuses on wet waste materials because there’s a lot of it and it costs money to dispose of it.

“We can avoid the disposal costs, completely eliminate the waste and turn it into fuel,” Oyler explained.

One product is a biocrude, a substance similar to oil that comes out of the ground. Biocrude can be refined using conventional processes to make gasoline and jet fuels. The other product is a form of natural gas. HTL also creates a small quantity of nutrient-rich solids as a byproduct, which can be used in fertilizer production.

“What sets HTL apart is the simplicity,” Billing said. “It was always the ideal solution because it produces quality crude with high stability.”

HTL is more far more efficient than ethanol. HTL yields three to four times the energy required to produce it, while ethanol barely breaks even. Unlike ethanol, which must be mixed with conventional gas before it enters your tank, HTL biofuel works in its purest form. Vehicles can run on 100 percent HTL.

HTL is far more eco-friendly than gasoline. With HTL, human waste, which would otherwise decompose, is used to power cars and trucks. With gasoline, oil is dredged up from the Earth and dumped into the sky, increasing the total volume of carbon pollution in the atmosphere. In the aggregate, HTL generates up to 75 percent less carbon pollution than gasoline.

This US population produces an estimated 34 billion gallons of wastewater per year, according to the Pacific Northwest National Laboratory. Local governments bear the brunt of the costs. Orange County, CA alone spent $17 million last year and there are about 15,000 wastewater treatment plants around the country. Oyler explained that this process could have a “transformational effect.”

“It’s because they have to be, they can’t have equipment breaking down,” he said. “They have to know that this is going to work.”

Last year, the Environmental Protection Agency, Department of Energy and the Water Environment and Reuse Foundation put the technology to the test and they liked what they saw.

As a result, Metro Vancouver is currently constructing a demonstration facility and the California Energy Commission, is working on a plant to process dairy industry waste.

Implementing HTL at all of U.S. wastewater treatment plants would produce 30–45 million barrels of bio-oil per year, which sell for $3–5 each. Human couldn’t fuel every car and truck in the country. The U.S. currently uses 18 million barrels of oil per day.

Oyler explained that this technology isn’t a silver bullet that will replace fossil fuels on its own, but a piece of a larger puzzle, which will include other forms of renewable energy and energy efficiency measures.

“A lot of things are making worthwhile contributions and this is definitely worthwhile,” Oyler said.

The process is exceptionally versatile and scalable. Billing said researchers are currently working to replicate the process in a much larger facility. The same reactors can be used for different organic materials, from municipal sludge — which also includes toilet paper and other components — to waste material from wine and beer production. Oyler also hopes to apply the process to dispose of trees killed by beetles and wildfires in the western half of the country.

Dealing with the sewage also preserves valuable drinking water. As the planet warms, droughts are getting longer, hotter and more frequent. Rivers and streams are drying up.

In many parts of the developing world, water is scarce and toilets are few, and people succumb to diseases like dysentery, typhoid and cholera. Even in America, where most homes have at least one toilet, wastewater is still a problem that we can’t just flush away.