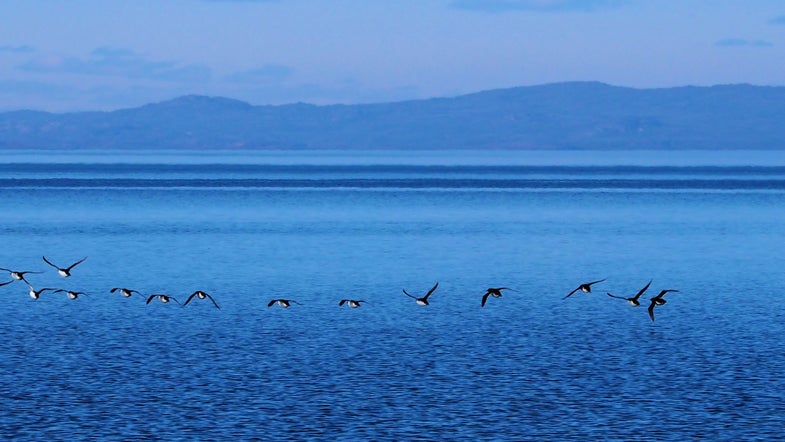 The research, published Tuesday in Nature Communications, is the result of an investigation into a spike in ammonia levels seen each summer in the atmosphere around the Canadian Arctic.

“Since it’s so remote, there are only so many potential sources,” says Greg Wentworth of the University of Toronto, one of the study’s corresponding authors. “And we ruled out the ocean.”

But there’s one thing that surges into the Canadian Arctic around the same time as all that ammonia, Wentworth explains—or a few tens of millions of somethings. Massive colonies of seabirds migrate up to summer in the area. And those seabirds bring a ton of crap with them.

By modeling the way the chemicals in all those bird droppings would behave, the researchers showed that migratory birds could indeed account for the annual spikes in ammonia particles. The bird poo releases ammonia gas, which reacts with sulfuric acid and water vapor to form clusters of molecules in the atmosphere.

“Those can change the characteristics of existing clouds,” says Betty Croft of Dalhousie University in Halifax, Canada, first author of the study. Croft, Wentworth, and their colleagues focused on the ammonia’s effects on a particular kind of low-hanging cloud that can reflect sunlight back up and away from the tundra. By seeding those clouds with ammonia, the birds are unwittingly helping to keep their summer home cool.

Not cool enough, unfortunately: The researchers aren’t sure how important this poop-cloud connection is to maintaining the temperature status quo, but they’re fairly certain we can’t stop the rapid warming of the Arctic with the help of more bird droppings.

Regardless, studying the effects of their poop is pretty important. In order to predict how hot the world will get and how quickly it will do it, researchers need to create accurate computer models of all of the countless variables that contribute to global warming.

The authors of the new study have shown a variable that hasn’t been studied before—the small but noticeable cooling effect that might be produced by migratory birds after a hearty meal – and now other studies can use this information to uncover even more unknown factors. Perhaps other animals are contributing to the local climate by way of their excrement. Maybe the ammonia brought in by traveling birds affects cloud formation in other ways; for all we know, it could also be changing clouds in ways that warm the area.

“Our study just highlights one connection,” Croft says. But it’s a good reminder that the migration patterns of animals – which are shifting in the wake of climate change—might help keep our planet running as usual.