A Tractor Beam Made Of Sound Waves

The device can move around centimeter-sized objects. 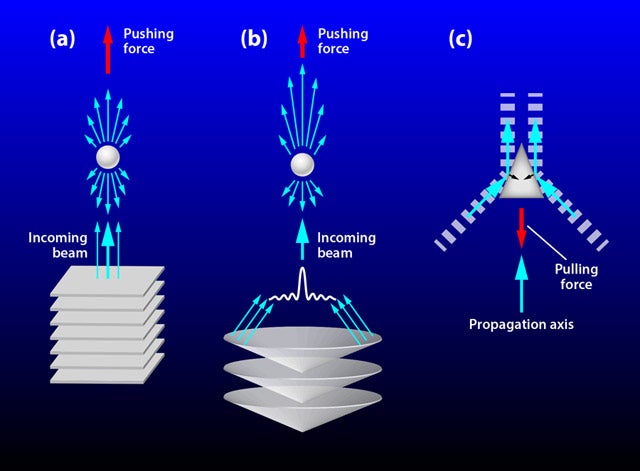 Tractor beams (short for “attractor beams,” which can bring one object closer to another from a distance) are a common trope in science fiction. But could they be made in real life? Researchers made news earlier this year when they created a kind of tractor beam, or “optical tweezers,” that can move around nano-sized objects with light. NASA scientists are also working on a project to reel in objects with light; Australian researcher have moved small objects a total of 5 feet with lasers. Most of this work has involved light, but now, a separate group has made an acoustic tractor beam that can move much larger objects with sound waves.

The device consists of about a thousand ultrasound emitters, placed underwater. When turned on, scientists used it to tug along centimeter-sized objects (roughly half and inch), such as a small hollow triangular shape. Normally the effect of sending acoustic beams at something would tend to push it away. But the scientists found that by precisely controlling the angle of sound waves, they can create a low pressure zone in front of the object, thus pulling it closer.

The technology has some limitations–it couldn’t be used in space, since as you probably know sound cannot travel in a vacuum (“In space no one can hear you scream,” as the Alien tagline goes.) But it could possibly be used for some biomedical applications, perhaps for manipulating objects beneath skin or within organs, without cutting. “You can imagine medical diagnostics much like the tomato-freshness test, squeezing cells to tell if they’re cancerous or metastatic or normal,” study co-author Gabriel Spalding, a physicist at Illinois Wesleyan University, told Popular Mechanics.

The technology is described in a study published in the journal Physical Review Letters.