Do All Babies Look the Same? Depends on Who You Are.

I’ve heard the claim plenty of times from friends. “Why send out baby pictures?” one asked. “All newborns look exactly... 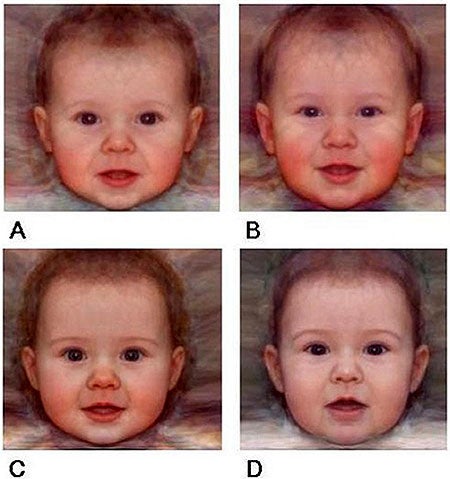 Who's the cutest? A and C, while B and D are less cute, according to St. Andrews University researchers. Psychological Science, Volume 20 number 2
SHARE

I’ve heard the claim plenty of times from friends. “Why send out baby pictures?” one asked. “All newborns look exactly the same. They barely even look human.” Having a baby has made me more sensitive to the subtle differences in smushy-faced features, but the question remains: do babies actually look different? Can face-recognition tech work on tiny babies.

As it turns out, scientists have had these same questions, and found that if you’re a man, babies might look the same. Researchers at St. Andrews University showed pictures of babies to men and women of different ages. Can you pick out the cute one among the not-so-cute cohort?

Cuteness is described by the researchers as: “protruding cheeks, a large forehead, and large eyes below the horizontal midline of the skull.” Turns out that men aren’t as astute at picking the cute baby.

The researchers surmise hormones rule women’s ability to notice the finer details of a newborn’s pudgy face. Women taking birth control pills, which raise hormone levels, were more likely to pick out the cute baby. Young and middle-aged women were able to pick out cute babies from bunch, while women aged 53-60 were just as unlikely to notice differences in the babies as men.

The researchers told a newspaper that their next studies would examine whether or not cuteness sensitivity is implicated in post-natal depression.

Is that my baby, all grown up?

Non-hormonally-charged people aren’t the only ones who have trouble distinguishing baby faces – computers also struggle to understand who’s a baby. When I added photos to Facebook recently, the website tagged my 7-month old as a middle-aged neighbor from Seattle. I don’t blame Facebook: I see that my little guy’s chubby cheeks and crinkly grin could be mistaken for adult faces.

So why are baby faces so difficult for computers to recognize? “There are a lot of shape changes between babies and adults, like nose changes, eyes shape, and mouth shape,” says Ira Kemelmacher-Schlizerman, a computer scientist at the University of Washington. With her colleagues, Kemelmacher-Schlizerman created a way to progressive age photos, starting with photos of babies just a few months old. Using thousands of photos of children and adults at many ages from the Internet, the researchers showed how to create average images from old sources.“We started from these photos since they were identified as the most challenging ones for current methods,” she says.

The new method was able to age real-life photos taken in all kinds of lighting, and this kind of work could help in recovering abducted children. Says Kemelmacher-Schlizerman, “It’s remarkable that we were able to achieve high quality results by applying average transformations estimated from internet photos. We didn’t include any craniofacial studies, change due to ethnicities, artificial addition of wrinkles, gray hair — all these can be added on top of the results we achieved automatically. The key idea of the work is to be able to automatically analyze large amounts of uncalibrated photos.” The research, funded by Google and Intel, led to a paper that will be presented at a Computer Vision and Pattern Recognition conference in Columbus, Ohio, this June.