How NASA Goes to Space Without Leaving the Earth

On June 16, 1968, Joe Kerwin, Vance Brand, and Joe Engle climbed into and were sealed inside their Apollo command... 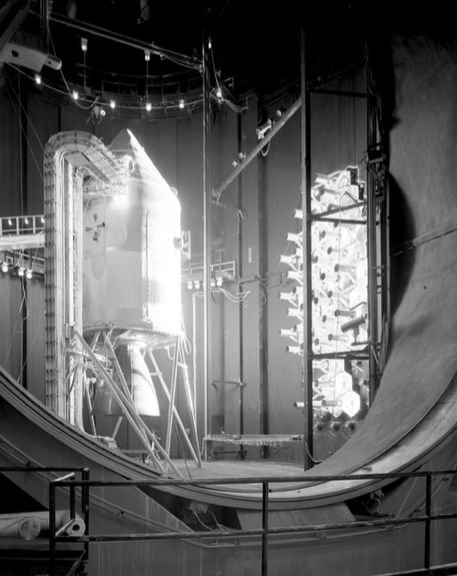 On June 16, 1968, Joe Kerwin, Vance Brand, and Joe Engle climbed into and were sealed inside their Apollo command module. Over the next seven days they lived off their onboard systems and consumables as they slowly rotated to ensure even heating across the spacecraft’s skin. They emerged seven days later bearded and tired but happy. Their mission had been, by and large, successful, though they hadn’t left the Earth. The crew of 2TV-1 had “flown” their mission in a massive vacuum chamber.

Genesis of the SESL

Vacuum chambers are extremely useful for pre-flight testing because space isn’t just a harsh environment for astronauts, it’s harsh for the hardware that keeps those astronauts alive. NASA knew this early on and also knew that vacuum chambers can replicate the lack of atmosphere, extreme temperatures, and lighting conditions of space on Earth. In 1962, after successfully using vacuum chambers testing during the Mercury program, NASA started planning a larger facility to test Apollo hardware before sending it to the Moon, a facility ultimately named the Space Environment Simulation Laboratory.

On February 20, 1962, the day the nation watched John Glenn become the first American in orbit, the working group behind the SESL met for the first time. They reasoned that a four-part laboratory would give them the right amount of space to test individual systems and full spacecraft in space-like conditions. And one chamber, Chamber A, would be man-rated. It would be able to replicate the frigid temperature of space and the heat of unfiltered sunlight, have holding areas for emergency personnel, include an emergency pressurisation systems, and complete biomonitoring for everyone involved.

A contract for preliminary studies was awarded to the Bechtel Corporation of San Francisco, and this helped refined Chamber A. It gradually took shape as an upright cylinder 75 feet in diameter (the chamber was eventually only 55 feet in diameter) with 97 foot tall straight sides, a hemispherical top, an ellipsoidal bottom, and a 45 foot tall door on one side. The whole thing would be made of carbon steel covered in stainless steel panels and reinforced with carbon steel stiffeners.

Construction began on May 7, 1963, and days shy of a year later Chamber A was ready for the first trial pump down to check for leaks. As they ran the test, controllers heard creaking and popping sounds before seeing the extent of the damage. It turned out that the lowering pressure inside the chamber caused the doorframe to buckle inward, and once it was distorted the adjacent stiffeners, o-rings, and panels. They buckled inwards, taking the supporting columns with them. It turned out that the chamber’s octagonal frame just couldn’t support the stress of the vacuum pumpdown, but luckily fixing the problem was a simple matter of repairing the damage and reinforcing the overall structure.

In May of 1965, the repairs were done and Chamber A passed its qualifying structural integrity test. Two banks of carbon arc modules that could simulate the light and heat of unfiltered sunlight were installed in following year. The massive vacuum chamber was ready for a spacecraft. 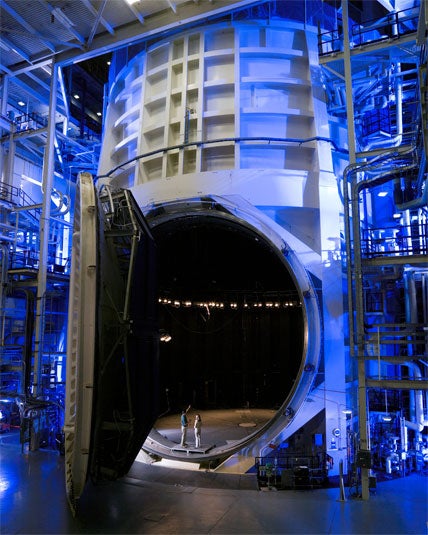 The massive Chamber A is still in use today.

Spacecraft 008, a first generation Block I Apollo command module, was stacked in Chamber A on May 17, 1966. Two months later, a 94-hour vacuum test revealed a handful of problems — the hatch failed the seal properly, moisture built up in the cabin, ice built up on the heat shield, and water lines froze.

On August 1, 1966, spacecraft 008 went through a second test with a volunteer crew: engineers from the Flight Crew Support Division Donald Garrett, Joel Rosenweig, and Neil Anderson went through a problematic eight-day thermal-vacuum. There were issues with the emergency repressurization, the cabin atmosphere sampling system, the sunlight simulation banks, and the urine dump system which meant they had to store it in bags for the duration of the test. They also ran into the odd problem of their underwear outgassing poisonous lithium fluorine gas forcing them to take them off. And because the test didn’t simulate weightlessness, the eight days lying supine on couches left the crew with sinus and lung congestion. A second “mission” between October 29 and November 1 with astronauts Joe Kerwin, Ed Givens, and MSC engineer Joseph Gagliano replicated the urine dump problem and a fuel cell failure that was eventually traced to a procedural error.

The tests were far from perfect, but that meant the chamber was doing its job. The two missions uncovered issues that ultimately forced 14 design and 14 procedural changes to the Block I spacecraft. But the Block I never flew. Spacecraft 012, another Block I model, was the spacecraft that claimed the lives of the Apollo 1 crew, and after the accident NASA decided it would only fly later Block II spacecraft. That meant the new vehicle was on deck for vacuum testing. 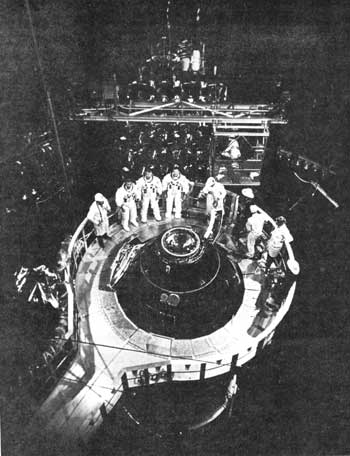 Testing in Chamber A

Astronauts prepare for a manned Apollo test in Chamber A.

Apollo 2TV-1, a Block II spacecraft, was loaded into Chamber A on April 23, 1968. From that point on, more than 400 people worked around the clock to get the spacecraft configured for the Apollo 7 flight, the first manned mission of the Apollo program. It was finally ready on June 15, and on June 16, astronauts Vance Brand, Joe Engle, and Joe Kerwin climbed aboard to being their 188-hour and 31-minute simulated mission. This faux-spaceflight put the Block II through the full range of Chamber A’s capabilities. The test kicked off with a “hot soak” wherein the Sun modules on the top of the chamber exposed the command module to temperatures hot enough to charr its outer blue skin. Then the spacecraft was plunged into a “cold soak” to mimic the frigid temperatures it would find in the Earth’s shadow. Another hot soak heated the full command-service stack to simulate the spacecraft rotating in orbit along the lunar plane. The test ran into problems on the fourth day when a water line burst and shorted out a large portion of the “Sun.” It forced a full shutdown and a 28-hour loss of test time, ultimately forcing revision of test procedures. The astronauts left the spacecraft on June 24, and in spite of the Sun breaking it was a largely successful test. There were no serious problems, just 12 hardware design and 13 crew procedure changes ordered to the Block II spacecraft. The 2TV-1 mission helped clear NASA to launch Apollo 7, which is did in October of 1968, which in turn helped get NASA to the Moon with Apollo 8.

Chamber A is one Apollo relic that hasn’t been abandoned in place. It’s been refurbished as part of the James Webb Space Telescope project with upgraded systems that can better simulate the frigid temperatures of deep space and better clean room conditions for testing.