Tune in on Friday evening 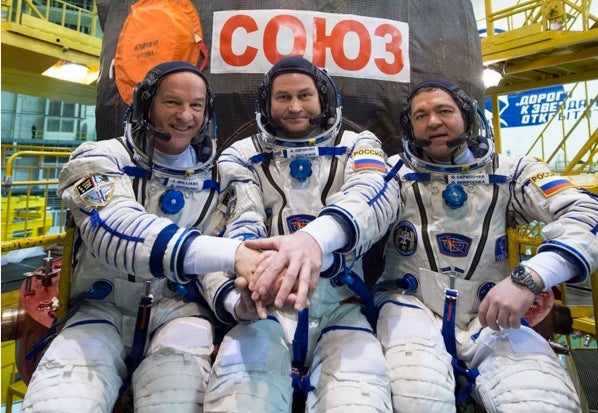 NASA astronaut Jeff Williams and Russian cosmonauts Alexey Ovchinin and Oleg Skripochka are scheduled to blast off from Kazakhstan on Friday at 5:26 pm Eastern.

The three space men will ride to the International Space Station in the Soyuz capsule. The craft will begin docking with the station around 10:30 pm, and by 12:55 am, the hatch will open and the three newcomers will officially be onboard the ISS. They’ll join NASA’s Tim Kopra, ESA’s Tim Peake, and Yuri Malenchenko from Roscosmos, who are already onboard.

Williams will live in the space station for six months. Combined with his previous trips to space, it’ll make Williams the American record-holder for most cumulative days spent in space, at 534. (A Russian cosmonaut holds the world record, at 879 days.) He’ll beat out astronaut Scott Kelly, who just completed NASA’s year in space experiment.