People are apparently injecting themselves with other people’s blood to get high now?

Because we ran out of other terrible ideas. 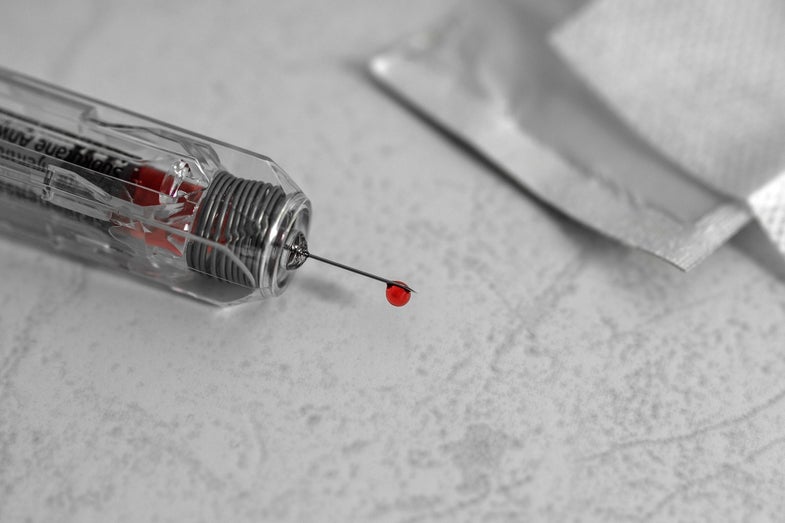 Unless you're getting a blood transfusion in a hospital, injecting yourself with someone else's blood is a terrible idea. Pexels
SHARE

Last summer, police in Bucks County, Pennsylvania picked up a man carrying an unmarked vial of red liquid. During questioning, the 33-year-old explained that the vial contained human blood and fentanyl, a painkiller 50 to 100 times more potent than morphine. The liquid’s street name: “BLOOD.” (All-caps is apparently the going style for the substance’s street name, but we’ll stick to “Blood” from this point forward because frankly, using BLOOD over and over again makes this article look like it was written by the Count from “Sesame Street”.)

Officers sent the vial, which contained about a half a teaspoon of red fluid, to forensic toxicologist Laura Labay.

“It was the strangest thing,” she told PopSci. “If you look at whole blood in a test tube, it’s thick. This looked like blood but it was more watery.” Some sort of fine powder swirled around inside it, and it smelled like cough syrup.

In her laboratory at NMS Labs in Willow Grove, Pennsylvania, Labay confirmed that the specimen did indeed contain human blood. But it also carried a lot more than fentanyl.

Lab tests detected 13 different substances in the “Blood”, including residues of ethanol, codeine, ephedrine, THC, and 11 milligrams of of methamphetamine—a full dose. The results were recently published in the Journal of Forensic Sciences.

When drug users shoot up, a bit of blood sometimes backtracks into the syringe. Labay and her colleagues have noticed that sometimes users will let their blood spill into the barrel, then give the needle to another user to sample (or “taste”) the drug. But this is the first time they’ve heard of anything quite like this, where it appears the drug-impregnated blood was distributed for later injection.

Because most of the drugs were present at levels lower than a typical dose, and because the blood contained metabolites that are left over after a body starts to break down these drugs, Labay thinks the “Blood” came from someone who had previously used pseudoephedrine and heroin.

Labay and her co-author can’t say for sure why someone would want to take drugs this way. It’s possible that the cocktail of other drugs was meant to heighten the effects of the methamphetamine. Or maybe some people just like the exoticness of consuming human blood. The dangers of doing so should be relatively obvious.

For one, unless the man carrying the “Blood” was lying about its contents, he was unaware of most of the drugs it was laced with, or even the primary ingredient. “People don’t know what they’re putting into their system,” says Labay.

Making matters worse, if the man who bought this vial already has a high tolerance for fentanyl, he might decide to inject a larger dose of Blood to ensure he feels its effects. That could potentially make him overdose on methamphetamine if he has no tolerance built up to the stimulant.

Obviously, infections are another big risk here. Because of backtracking, sharing needles spreads HIV, hepatitis, and other blood-borne infections. And that’s with just a little blood residue. Injecting mysterious vials of blood is an even worse idea.

Plus, you’ve got to worry about blood types. If you inject blood that’s incompatible with your blood type, your immune system might start to rip the foreign blood cells apart, triggering a cascade of reactions which potentially include blood clots clogging up your veins and killing you.

Popular Science tried reaching out to the Bucks County police department to find out how common cases like this are in the area, but we didn’t hear back before this article was published. (If we get more info, we’ll be sure to update this post!)

As for Labay, she says it’s the first time she’s seen something like this, and she couldn’t find any other examples on the dark web, either. “I don’t know if it’s one case in this country, or if this is a common practice. It’s just really odd.”

Blood has its own street name, which implies this may not be a one-off case—even though it’s a bad, bad idea and makes no sense. What will the kids think of next?