How To Keep Your Backyard Chickens Bug-Free 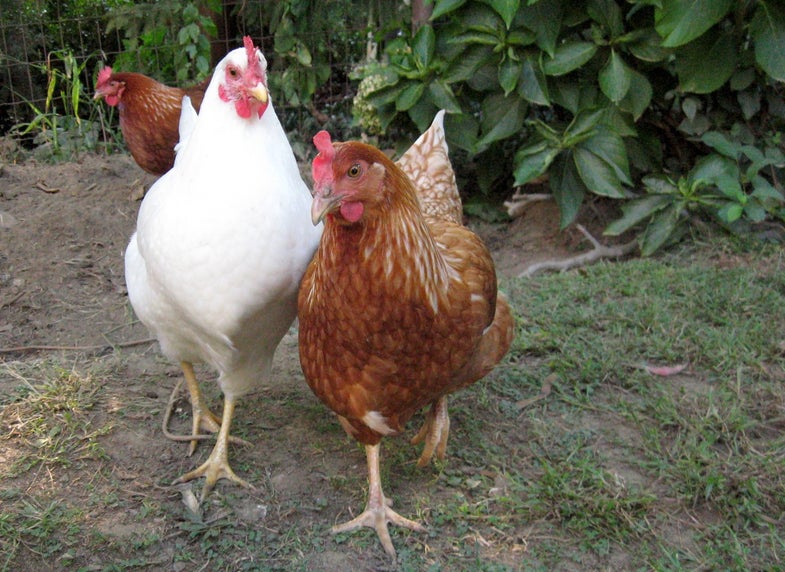 It’s hard to pinpoint the start of the American backyard chicken trend (or the bogus media-hyped trend, according to Slate). But, whether the practice has truly grown in popularity or not, one thing those trend pieces tend to gloss over is parasites.

Just like most other animals, chickens can fall victim to ectoparasites—freeloading critters that live outside their hosts, such as fleas, lice, and mites. Now, researchers at the University of California, Riverside, have surveyed chicken parasites that lurk in yards and coops across southern California. The work published this week in the Journal of Medical Entomology.

The researchers examined five randomly selected chickens from twenty properties last summer, and found six species of chicken lice, three mite species, and one type of flea. According to the authors, both the range of different parasites and the numbers found on the birds were higher than is typical of a commercial chicken flock.

None are known disease vectors for chickens, nor are they a major health threat for people. Rather, these parasites may simply cause the chickens stress and discomfort. Most of the louse species don’t feed on blood, but on feathers, which may also cause aesthetic damage.

Since the survey only included parts of California, it’s hard to say how well it represents backyard chicken operations across the country, although the farms did vary in climate and setting. “I think we did a very good job with what we had—we were all over southern California, and there are a lot of different microclimates here,” says Amy Murillo, a PhD student in entomology at UC Riverside and the first author. “Some places were closer to the coast, some were more inland. Riverside itself is starting to see more desert. So we got a fairly good representation of the different microclimates, yet we saw a distribution of lots of different parasites.”

The research is “a nice, preliminary study,” says Warren Booth, a molecular biologist at the University of Tulsa who studies bed bugs and swallow bugs, and who wasn’t involved in the research. “But it does not provide some potentially important information that might inform us as to where these extoparasites came from,” such as where the birds were purchased, the geographic distribution of the parasites, and which nearby wild bird species may be contributing to their spread.

“I think that this study will certainly provide the motivation for other researchers to consider assessing backyard flocks across other regions in the U.S. and abroad,” Booth adds.

Depending on where you chicken farm, there may be some variation in the bugs you encounter. Still, it’s reasonable to assume that your backyard chickens could be susceptible to some sort of ectoparasite.

So, what can you do to stop it?

The best option, Murillo says, is to prevent the parasites from getting onto your property in the first place. Inspect new chickens before you introduce them to your flock and don’t visit multiple farms or backyard operations on the same day, as the parasites can hitchhike on your clothing or shoes. Wear rubber boots that can be easily washed with soap, water, and bleach. And keep your chickens’ feed and water out of reach of wild birds and rodents, which can also introduce parasites.

After parasites are already in your flock, control gets a little harder. Still, there are options. For urban farmers who aren’t averse to pesticides, chemicals like pyrethrins and pyrethroids—the natural and synthetic versions of a very similar chemical, which is a relatively mild insecticide—can do the trick. Just be sure to follow the label instructions. (UC Riverside has a database that tells you which products are legal in your state, although it’s still under construction.)

Some parasites, including chicken mites, have already proven resistant to such chemicals, and it isn’t always fun to chase a chicken around the yard with a spritzer or duster. Another option, Murillo says, is to use food-grade diatomaceous earth (DE)—a fine powder that cuts up and dehydrates insects and mites. Add the DE to a box of sand, and the chickens will use it when they take their dust bath, killing unwanted parasites in the process.

There you have it. Happy chicken farming.

Murillo and Mullens, “Diversity and Prevalence of Ectoparasites on Backyard Chicken Flocks in California,” Journal of Medical Entomology, January 11, 2016