Much faster than the existing test 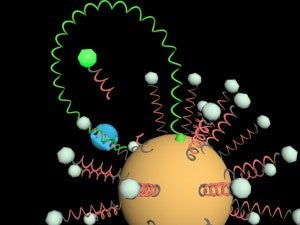 Scientists have engineered nanoparticles to do all sorts of amazing things, from killing diseased cells in the body to creating a powerful water-resistant coating. Now a team led by researchers at Brock University in Canada has created a nanobot that can help diagnose disease more quickly and accurately than before. The scientists recently published a study outlining the technology in the journal ACS Nano.

“The design [of the nanobot] is complicated, but the way you use it is extremely simple,” Feng Li, a chemistry professor at Brock University, says in a press release. The body of the nanobot is just 20 nanometers in diameter—smaller than the head of a pin—and made of gold. It has short and long strings of DNA—the long strings are tailored to a specific disease (the researchers were first testing it for tuberculosis) and the short strings contain a compound that fluoresce if the strand is cut. If the bot is dropped into a blood sample in which there are cells containing tuberculosis DNA, the long strands identify the disease and cleave off the short DNA strands, causing the sample to glow.

That speed is important as most tuberculosis tests take at least a day and need to be analyzed by doctors or specialized lab technicians. And while that’s a good thing to have for bacterial infections like tuberculosis, it would be also be useful to quickly diagnose other highly contagious viral diseases like Ebola. Though the particles can’t themselves combat a disease, they could diagnose it faster so that doctors can treat the illness more effectively. The researchers don’t mention the cost of the particles, but if they’re inexpensive enough, they could someday be used commonly in clinical practice.

The researchers next plan to modify the nanobots to detect specific types of microRNA, which scientists use as biomarkers to diagnose diseases like cancer, Parkinson’s, and heart disease.