Oh, the places your blood will go after you donate it 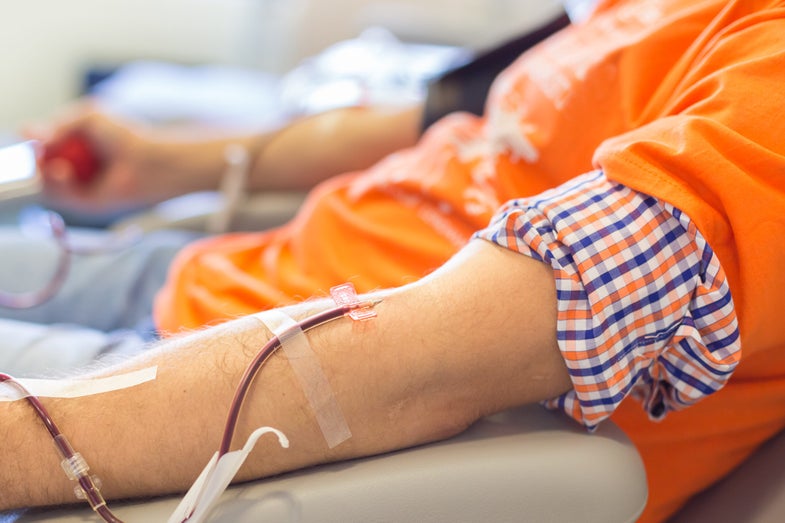 Last September, the Federal Drug Administration and the Centers for Disease Control introduced new rules for blood banks: Every unit donated in the United States must now be tested for the Zika virus. An obscure policy change, the announcement made but the smallest of blips in the news.

But for people like Michael Busch, the decision came with some added perks. Busch is the director of the Blood Systems Research Institute, and he studies infectious disease. By flagging blood donations infected with Zika, the nationwide testing allowed Busch and his team to pull samples and follow up with donors to try to enroll them in research studies. In other words, the new policy provided him with a long list of Zika-infected potential test subjects.

“It’s somewhat opportunistic,” Busch says. “Once the screening test is implemented, we’re able to execute what we think are informative and important studies.” Busch and his team presented the results from one of those studies, which followed 50 Zika-infected blood donors for 24 weeks, at the American Association of Blood Banks conference in October.

The Blood Systems Research Institute is the central laboratory for the National Heart, Lung and Blood Institute, which studies transfusion medicine in an aptly-named study called REDS-III. Like many large organizations in the United States that collect and distribute blood, the institute takes advantage of the millions and millions of samples at their disposal to conduct research studies.

Most of these studies are focused on making sure the blood supply used to treat sick and wounded people is safe and reliable, but the resulting data also gives scientists basic information about blood-born diseases like Zika, HIV, hepatitis, West Nile virus, and others.

“There’s a lot to be learned from donors about basic disease,” says Susan Stramer, executive scientific officer for the American Red Cross.

But from an ethical standpoint, studying donated blood can get a little complicated.

The procedure to give blood is pretty similar across blood centers: go in, do a quick physical, and fill out a bunch of paperwork. Tucked into that paperwork is a section where donors give consent for their blood to end up in scientific studies. This doesn’t mean some donors will unwittingly give a pint to academic inquiry when it should go to someone in dire need of a transfusion; during the actual donation, the first bit of blood—about 30 to 40 milliliters—gets siphoned off into a few vials. That first draw heads off to the lab, where technicians screen it for different infectious diseases to make sure the donated unit is safe.

Uninfected samples are sent off to sick patients around the country, with only the small testing vials occasionally used as controls in studies. But if tests flag the blood as positive for a particular infection, the full unit stays put. It’s quarantined until the Red Cross or other scientists pull it for research.“Those units would be discarded, anyway,” Stramer says.

From there, scientists can sequence the genetic code of the bloodborne pathogen, and look at its molecular structure. They can tease out what stage the infection is in, and study the blood’s immune response to it.

Donors are notified and counseled if their blood comes back positive for a disease, Stramer says, and at that point, they’re sometimes asked if they’re interested in enrolling in an ongoing study. That’s how the REDS-III Zika study worked: The team connected with positive donors and collected their blood, urine, saliva and semen. Based on those samples, they were able to get an idea of how long the Zika virus stuck around in different bodily fluids, and how often donors with the virus actually developed symptoms.

Darrell Truzzi, the medical director at the Institute for Transfusion Medicine in Pittsburgh, one of the affiliate labs for REDS-III, says that blood donors are more likely to participate in research than other groups. “They’re altruistic already,” he says. “They’re by and large very willing to participate in clinical trials.”

Not every sample from every blood donation ends up in a research study, though. Not even close. Stramer estimates that only around one percent of blood donated through the American Red Cross ends up there. “But when you’re looking at 11 million donations from 6 to 8 million donors a year, it’s still quite a large number.”

There’s a key advantage to studying donated blood and blood donors to learn about infectious pathogens: it’s one of the few situations where scientists can look at a disease before symptoms start. The donors appear healthy—otherwise, they wouldn’t be able to donate blood at all. That gives scientists a unique opportunity to see what an infection does in the body in the absence of any clinical symptoms, says Mars Stone, a scientist with the Blood Systems Research Institute and the REDS-III program. They can find out, for example, how many people who have an infection actually get sick as a result of it.

“In very few other contexts would you be able to have samples before a clinical outcome,” she says. “Without donor screening, the only people you study are the people presenting with disease. The samples from before that are really only available through blood donation.”

Like a lot of blood science, these testing programs got their start in the late 1980s when HIV and AIDS were on the rise. That’s when the NHLBI started the first iteration of the REDS program, initially called the Retrovirus Epidemiology Donor Study. “It did a lot of work to better understand HIV and better characterise the risks of infection,” says Simone Glynn, chief of the Blood Epidemiology and Clinical Therapeutics Branch at the National Heart, Lung and Blood Institute. The first run of the program spanned 13 years, from 1989 to 2001. REDS-II ran from 2004 to 2012. The current program, REDS-III, started in 2011.

In the 28 years since the start of REDS, blood donor research has helped tracked the epidemiology and burden of various diseases in the general population by extrapolating out from the number of infected donors, says Glynn. It’s helped scientists understand the way infections like HIV, hepatitis-C and West Nile Virus appear and progress in the body. Research through the program drew a connection between a virus called human T-lymphotropic virus type II and a progressive neurodegenerative disease in 1997, and tracked a 2014 Chikungunya virus outbreak in Puerto Rico.

Research through the American Red Cross, which frequently collaborates with the REDS programs, was also key to developing an understanding of HIV, hepatitis B, and HPV. A study published last year by the Red Cross used blood donor studies to look at the way a tick-borne blood parasite called Babesia impacts the body.

“The ability for the blood donors to participate in research and provide data is extremely informative,” Glynn says. “It lets us look into particular research questions that otherwise we would not be able to look into.”

Saving something for later

The blood collected during the REDS-III Zika study helped the program answer their particular research questions, but that wasn’t the end of the line for samples. “We’ve been able to provide those samples to a lot of outside investigators,” Glynn says. “They’re used by people who are developing diagnostic test for Zika, for example, because it’s a source they can evaluate.” Glynn says the samples have been sent out to around 15 or 16 other research groups at this point.

The Zika stores are just a small piece of the vast database of blood samples the REDS program makes available for additional research after specific studies are completed. REDS passes any remaining material onto BioLincc, a program run through the National Heart, Lung and Blood Institute, which stores and tracks millions of samples of blood and other tissues. The materials are available to other scientists, who can apply to use them for their work.

The Blood Systems Research Institute also stores samples—it has about one million vials, tucked away in what Stone calls the “freezer farm.” The American Red Cross has plenty of their own, too. This ensures blood samples will be available if, or rather when, new research questions arise.

While this is all covered under the consent forms donors sign, most don’t know what their samples will actually be used for. In fact, many researchers don’t know. Tim Caufield, an expert in health law and policy, says constantly-evolving research questions complicate the ethics of these types of biobanks. “That kind of broad consent does not fit with traditional norms of consent,” he says. “Despite the fact that has become a very common approach, there are still questions on whether it’s satisfying existing legal and ethical norms.”

In 2010, REDS-II published data from a 1998 survey that asked blood donors if they would agree to store their blood in a biobank, and 87 percent said that they would. But technology is better than it was in 1998, and more and more can be done with just a little bit of blood. “Now, if you donate blood, they could sequence the cells and have genetic information. That’s a lot different from anonymized tissue,” Caulfield says. There’s a lot of personal information hidden in DNA, and genetic sequencing can put privacy at risk. It’s far from difficult for a scientist to trace a genetic sample back to the person who donated it, particularly when it’s tagged with the donor’s sex, age, ethnicity, or other characteristics (as samples in biobanks often are), even when they’re supposed to stay anonymous.

Even the idea that samples from blood donations are used in research studies is a little ethically tricky, Caulfield says. The consent is narrower, but still leaves a wide range of experiments the blood could be used for—from looking for genetic markers of disease, to classifying characteristics of a certain population, to testing for the prevalence of infection in a group. These issues, he says, are fragile. “If the entity is a trusted entity like the Red Cross, the public is far more willing to donate, and more comfortable with a broad consent,” he says. But trust can erode. “I think who’s doing the research, and what structures are in place, matters to people.”

For researchers, these types of studies are critical to the understanding of infectious diseases and the risks they pose. “We’re utilizing the incredible resource of the blood supply to contribute to basic knowledge,” Busch says. Truzzi notes that these studies also keep a constant eye on disease risk. “We’re monitoring infectious diseases in blood donors, so that if infectious disease issue arises, we have a mechanism to rapidly study it,” he says. “We’re the canary in a coal mine.”