Fighting RSV in babies starts with a mother’s antibodies

Infants have underdeveloped immune systems. Maternal antibodies, boosted through vaccines, could be their best hope. 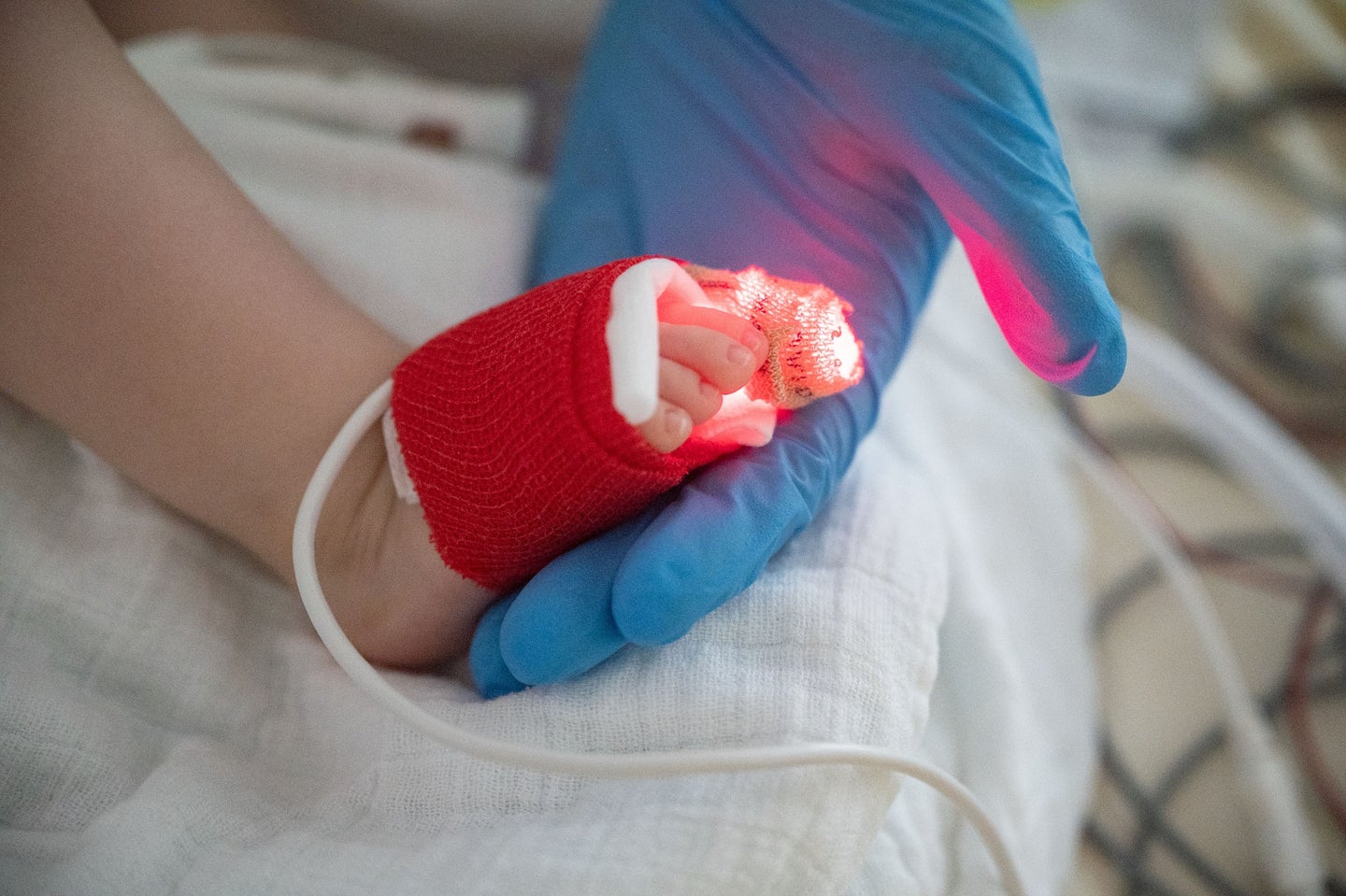 An intensive care nurse holds the foot of an infant suffering from respiratory syncytial virus (RSV) in Olga Hospital in Stuttgart, Germany. A Pfizer vaccine may soon be on the way. Marijan Murat/picture alliance via Getty Images
SHARE

A respiratory virus that commonly infects infants and young children—and can be harmful to older adults, too—is circulating across the US. Cases of respiratory syncytial virus, or RSV, rose higher and earlier in the year than what’s expected of a usual winter-season spike. By the start of November, the virus had swamped pediatric wards at such levels that clinicians told The New York Times it brought to mind the COVID pandemic’s first surge.

Most children who catch RSV have mild cold-like symptoms, but a fraction become very ill. By one global estimate, the virus is responsible for about 1 in 28 deaths among children four weeks to six months old.

No US-approved vaccines exist for this pathogen. But, just as newly made immunizations drove down deaths and hospitalizations from COVID, jabs for RSV would be a welcome tool, able to forestall future outbreaks. Pharma giant Pfizer, for instance, recently announced it has promising data in early trials for its protein-based formulation. Pfizer says it plans to submit the single-dose shot to the Food and Drug Administration for approval by the end of 2022.

The company says its treatment protects infants in the first six months after birth—but the injections aren’t meant for babies. Instead, people who are pregnant would get them in the late second or third trimester; the immune defenses their bodies make are passed on through the placenta to fetuses, and, later, by breast milk to infants. In this way, the vaccine creates RSV-specific antibodies inside a parent, which then flow through the natural pathways that connect a mother to child. This powerful combination could be part of a growing approach to combat numerous viruses able to harm mothers and their newborns.

[Related: Improving your baby’s bone health starts in the womb]

The placenta—the organ that temporarily exists to serve the unborn in the uterus—is a biological mash-up of a scuba tank and room service: It supplies oxygen and food to a growing fetus. It also actively delivers maternal antibodies, especially near the end of a term. “A full-term baby has a robust load of antibodies that were bequeathed from the mom during pregnancy,” says Milagritos Tapia, a pediatrics professor at the University of Maryland School of Medicine.

In studies on immunological protection during pregnancy, antibodies—proteins that the immune system uses to tag and flag invaders—get the lion’s share of attention. Vaccines go the extra mile to trigger a person’s body to generate fresh antibodies against a specific virus. There are other defenses that get passed on to infants, but those aren’t as easy to measure. “The reason that we talk about antibodies is they’re easier to understand and explain,” Tapia says.

Infant immunity has many nuances. Young children, as the maxim among immunologists goes, aren’t simply small adults whose bodies respond proportionately less to a vaccine. Even after they’re born, their immune systems keep developing the ability to produce antibodies. The first vaccine shots that babies receive don’t evoke as strong a response as later ones, which is why infant immunizations against diseases like hepatitis B or polio come as a three-dose series.

[Related: Why are kids’ immune systems different from adults’?]

The protection babies get during pregnancy or from breast milk, then, is a stop-gap measure. Luckily, those temporary guardians are effective. There’s clear evidence that antibodies against RSV are efficiently passed onto children during pregnancy.

In a first-of-its-kind study looking at RSV protections from maternal antibodies, Tapia and her colleagues followed nearly 600 mother-infant pairs in Mali. They measured the levels of antibodies for RSV in infants at birth and in umbilical cord blood; higher levels were associated with significantly decreased odds of newborns having a case of RSV in the first three months of their lives, as shown in a study published in the journal Clinical Infectious Diseases in 2020. Put another way, the more neutralizers the babies emerged with, the better defended they were in their vulnerable early stages.

“It was what we had expected to see,” Tapia says. “Sometimes you have to prove what you think.” It also strongly suggests that “a vaccine against RSV delivered to pregnant women” would protect infants against infection from the virus in early infancy, as she and her co-authors write in the paper. Though the researchers didn’t study immunizations directly, showing that a baby born with lots of antibodies—which come from the parent during pregnancy—is a good sign antibodies generated from a maternal vaccine also end up defending the child after birth.

Vaccines given to pregnant people have precedent. The American College of Obstructions and Gynecologists recommends that those who are pregnant get the Tdap vaccine—so nicknamed because it protects against tetanus, diphtheria, and pertussis—between 27 weeks and 36 weeks of gestation, and preferentially on the earlier side of that window. The Centers for Disease Control and Prevention also advocates that pregnant women should get a flu vaccine (by injection, not the live form of the virus that comes in a nasal spray). Babies born to those who had maternal influenza vaccines are less likely to catch the flu in their first six months of life, studies have shown, too.

There is speculation that COVID quarantines may be responsible for the subsequent surge in RSV cases because pregnant people encountered the older virus less.

“As lactating mothers were less exposed to common viruses during the COVID-19 pandemic due to preventative measures,” it’s expected that “the maternal immune system was not boosted, resulting in a lower production of antibodies,” write physicians Hannah Juncker and Britt van Keulen—a PhD student and postdoctoral researcher, respectively, at the Dutch Human Milk bank—in a joint email to Popular Science. Junker and Britt are co-authors of a study, published in June in the journal Microbiology Spectrum, that found antibodies against RSV in mothers’ milk decreased six months into 2020 lockdowns, shrinking by a factor of 1.7.

Fewer antibodies in human milk “led to a lower protection of the breastfed infant,” they write, resulting in a “massive epidemic” of RSV in the Netherlands in summer 2020.

If this hypothesis—that COVID protections are a contributor to RSV outbreaks—bears out, the vulnerability comes on quickly. “It’s one or two seasons of people missing their RSV exposure and, ka-bam!, here we are now,” Tapia says. “It seems like we need to be regularly exposed to these respiratory viruses.”

The current US surge, two years after the Netherlands spike, highlights RSV as a global disease. For children younger than six months, the virus is the top cause of pneumonia worldwide. The vast majority of related deaths occur in low- to middle-income countries.

“Not only are more babies getting sick” with RSV in developing nations, “but there are fewer resources to support them through their illness,” Tapia says; some hospitals may lack the breathing machines the sickest babies need. Even minor cases, which might cause a caregiver in the US to take a sick day, can have severe consequences in resource-poor nations where, Tapia points out, a parent missing a day’s work means their family goes hungry. The COVID pandemic has shown that access to vaccines can be starkly unequal; for an RSV shot to help on the global scale, it will have to boost the immune systems of infants in the poorest countries, too.

As Pfizer continues to test its vaccine for safety and effectiveness, there are ways for pregnant people and those with children to protect themselves against RSV. “It’s the same things that kept COVID away,” Tapia says: Washing hands, wearing masks in crowded places, and staying clear of people who are sick or have symptoms are all ways to stay healthy in these virus-heavy times.