We Tested The iPhone 7’s Three Most Notable Features

New camera, waterproofing, and the dear loss of the headphone jack For every iPhone release, Apple goes out of its way to remind customers that this is the best one yet. The company is liberal with its use of superlatives to describe new products. In the case of the iPhone 7, it’s the fastest, beefiest and best overall phone the company has produced. And this year, however, the Cupertino company adds a few more accolades to its list of superlatives–most camera-ed, waterproof-iest (our words, not Apple’s). But despite adding IP67 water resistance and offering two cameras on the back (7 Plus only), Apple has also made the new iPhone 7 with a glaring weakness: It’s the first iPhone to ship without a built-in 3.5mm headphone jack. How can Apple claim this is the best iPhone when, in that respect, even the iPhone 1 has it beat? By making sure those first two new features are stellar.

How waterproof is the iPhone 7?

Apple touted that its newest iPhone finally has the ability to withstand water. The company’s official claim is that the iPhone 7 is “splash and water resistant” instead of being full on waterproof. This means that if you drop your phone in a toilet, you don’t have to dive your hand in quick to retrieve it and rush to find a bowl of rice. However, you still can’t go scuba diving with your phone case-free.

The iPhone 7 is rated IP67. Having tested against the Ingress Protection (IP) standard means the iPhone 7 and 7 Plus is fully dustproof and fine with water as shallow as 15 centimeters and as deep as one meter. So basically, this phone can survive being submerged, but don’t leave it in water deeper than three feet.

Your phone will survive but don’t expect your speakers to work properly right away. After tossing our iPhone 7 Plus into the big, concrete water fountain in Bryant Park, New York (which left our jet black-colored device with a couple very noticeable micro-abrasions), we dried off the handset and held it with the Lightning port facing down. Apple advises that users dry off their phones shortly after it resurfaces, and not charge them until 5 hours later. The one we submerged worked perfectly fine after leaving the water, except for the speakers. After our iPhone finished its swim, the bottom speakers just didn’t work in the same way: Keyboard clicks were hard to hear and the the sound of an iMessage being sent was a bit off. Luckily, this new iPhone offers stereo speakers–one at the bottom of the device (which existed in the previous iPhones) and an improved speaker at the top above the screen. Sounds at the top sound noticeably clearer and louder than the bottom.

After 24 hours, the bottom speakers sound less muddled when turned up loud to play music. But when volume is turned low, iOS’s various sound effects may as well not be there.

It’s important to note that Apple admits its latest iPhone’s water resistance is not a permanent feature. The more times you dunk the device, the less resistant it becomes to water damage. Apple also will not cover water-caused damages under your iPhone warranty. So swim wisely.

Two Cameras Are Better Than One

Similar to the iPhone 6S and 6S Plus, Apple has included a 12-megapixel shooter on the rear of the device. Previously only the larger 6 Plus and 6S Plus iPhones shipped with optical image stabilization–which helps to prevent the shaking of one’s hands from affecting the resulting photo. Apple now includes this stabilization technology in both the iPhone 7 and 7 Plus. What the company doesn’t include in both versions of the new iPhone is the new dual-camera setup. 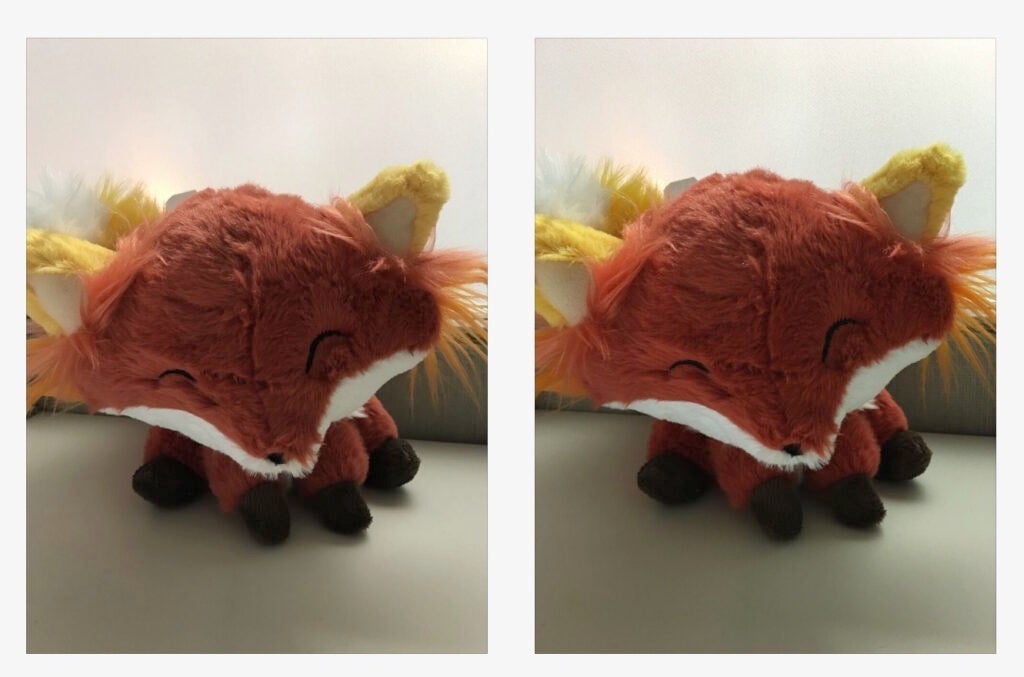 The more expensive iPhone 7 Plus will offer users two cameras on the back: a wide-angle lens (f/1.8 aperture, to be specific) that smartphone users are used to as well as a telephoto lens, both 12 megapixels. With the telephoto lens, iOS users are finally able to perform optical zoom. Currently on the iPhone, digital zoom is akin to cropping a photo–no added detail is offered when zooming in the camera app. With the inclusion of a second telephoto lens, iPhone 7 Plus owners are able to shoot with a lens that gets a closer look. After maxing out the optical zoom (which goes from 1X to a max of only 2X, unfortunately), iOS on the 7 Plus allows the zoom function to go digitally from 2X to 10X. Though, as mentioned before, no added quality or detail can be had from digital zoom this way. Simply a tighter resulting image.

And then there’s the coming Portrait mode. In an effort to mimic the quality of high-end, SLR cameras, a coming update from Apple will let 7 Plus users utilize both lenses to blur the background of their photos. The depth of field effect offers a pro-look to otherwise normal-seeming portrait photos. Ideally. We will see. 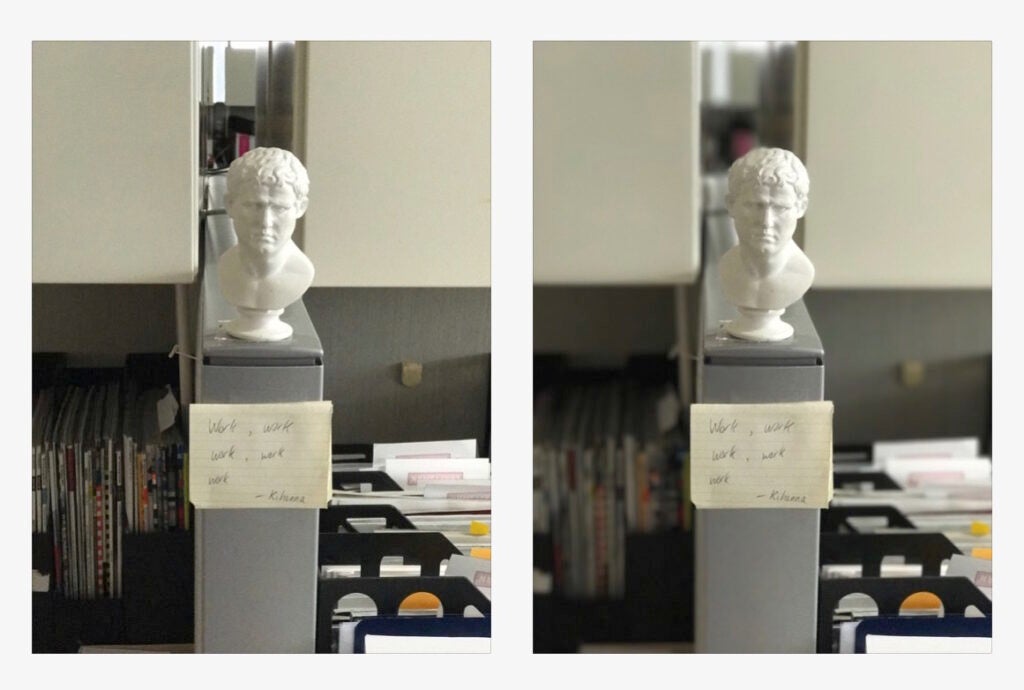 Apple’s portrait mode adds blur to the background of photos (right) and saves the regular photo (left) in your camera roll as well.

Of note, Apple’s background-blurring portrait mode doesn’t currently ship with the iPhone 7 Plus. Though those living life on the edge in Apple’s beta program can install the new software right now. We tested out portrait mode on this iPhone 7 Plus (find our results here) and came away with good results. Though not great, portrait mode did its job and blurred the back of our shots, leading to an SLR-like image. Though upon closer look it’s clear that software has a hand in enabling this depth-of-field trick. The blur occasionally extended to the subject of the photos and images were lower resolution compared to normal iPhone photos. Blurred photos also came out more noisy than normal ones and the iPhone won’t let you use the mode in low-light settings. Though being a beta, we hope Apple refines the feature as time goes on.

With the release of the iPhone 7, the headphone jack is now dead to Apple. While the other iPhones customers continue to have the time-tested 3.5mm audio port, the iPhone 7 shows that the way forward for Apple doesn’t include analog audio offered by default.

In its place is the Lightning port, which will not only be used for data transfer and charging, but also for audio playback. Things like music and podcasts that used to spit out of the headphone jack will now go through the Lightning port. What this could one day mean is quality-sounding headphones that don’t require a charge (as they would pull power from the Lightning port) and potentially using digital rights management to limit what types of audio goes out the port–with analog, you simply plug it in and hear audio, but with lightning headphones, there’s a chance the app could block audio after say five plays or some other kind of digital rights management. But for now, the experience is honestly mostly the same as it was before for many people.

Those who only use Apple’s earbuds with their iPhone may only briefly notice a difference. While the male connector at the end of the headphones is different, the earbuds sound and operate exactly the same. Though good luck if you want to take a call using the headphones and charge the device at the same time.

Those who prefer Bluetooth headphones can still make use of their favorite wireless standard with the iPhone 7. And those who prefer more traditional listening devices with a headphone plug can make use of the included 3.5mm to Lightning adapter. If you have one pair of headphones you use, you might as well leave them attached to the end of your ear cans. If you have multiple pairs of 3.5mm-supporting headphones, get ready to lose that tiny, white adapter.

Apple’s omittance of the headphone jack is undoubtedly annoying. But untangling headphones before each use is more annoying. Unless you’re an audiophile that needs the highest level of quality at all times, go wireless.

Headphone jacks aside, the number one complaint of every smartphone ever created is battery life. But part of being the best iPhone ever released is having the best battery. Instead of making the iPhone 7 thinner than its predecessor, Apple has chosen to improve the battery included in the device. The smaller iPhone 7 now packs a 1,960 mAh battery while the 7 Plus offers 2,900 mAh. Up from the iPhone 6S’s 1,715 mAh battery and 2,750 mAh of the 6S Plus.

In our tests, we used an iPhone 7 Plus and an iPhone 6S Plus and streamed video on each all night. The brightness was turned to the max, the WiFi and Bluetooth were left on, and the volume was turned all the way up. How that translates to real world use: Neither phone lasted into the morning. Our overnight Hulu binge-watching test revealed that the iPhone 7 Plus was always 10% ahead of the 6 Plus, which led to around an hour and a half of extra use.

The iPhone 7 Plus is the best looking Apple phone since the iPhone 4 from 2010. Apple’s removal of the headphone jack will hurt audiophiles dearly but will leave most unscathed in their day-to-day lives. The dual camera will be useful for those who take pictures often, and the toilet-drop protection will come in handy for the clumsy. Aside from these features, 6S owners mostly have the 7 already. Though for anyone below a 6S who can get it on subsidy, feel free to upgrade to the best iPhone yet.