The Google Assistant faces off against Amazon's Alexa 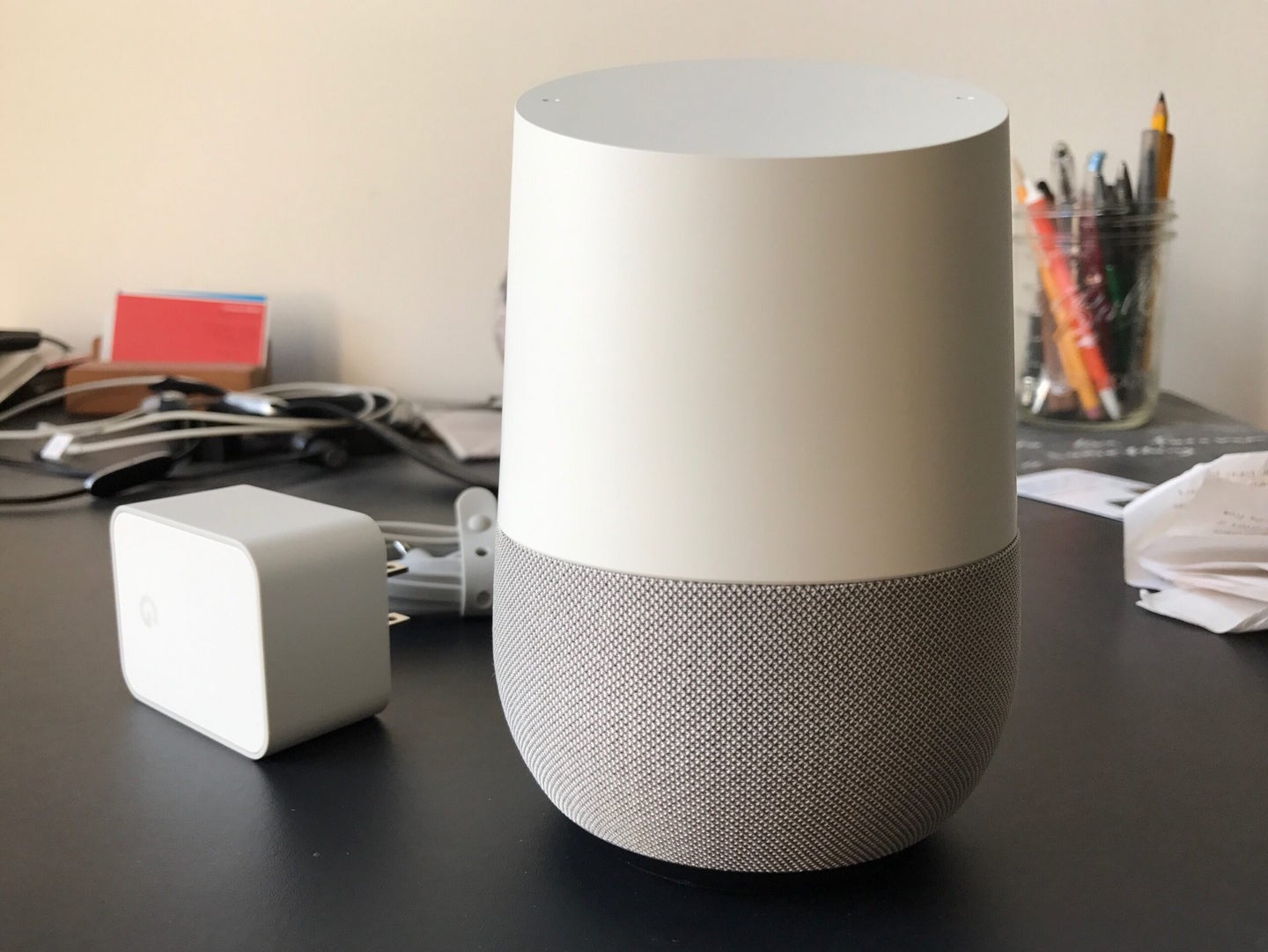 The Google Home is a $130 microphone that listens to your every move and caters to your every spoken whim. If that sounds a lot like the Amazon Echo and Echo Dot, you’re not wrong. But Google hopes you’ll put its specific brand of voice assistant in your living room or kitchen.

Home Is Where The Voice Search Is

Google first unveiled Google Home earlier this year at its developer conference, almost two years after Amazon released Echo (and around the time the latest iteration of the Echo, the Dot, hit stores for a mere $49.99). Similar to the Echo, Home lets you pose questions to the sentient void, add things to your shopping list and set cooking timers (several at once, even!). Once you’ve shouted at your kitchen to set a timer or queue up a song while cooking, you’ll never want to go back.

Where Amazon created a personal assistant that looks more like a computer accessory than a home appliance, Google has clearly tried to make its competing product fit in with less high-tech objects: Home looks like a jar hooked up with an air-freshener and had a really smart (maybe even too smart) baby. The Google Home curves and slants in all the right places, allowing it to better blend with the other items on your desk or countertop. The emphasis on aesthetics extends to the base, which is easily swappable and comes in six colors (some bright mesh, and some in stately metals). Hitting the microphone mute button even reveals an almost candle-like set of yellow lights – much more pleasing to the eye than Amazon’s harsh red ring.

Home provides a house for Google’s aptly-named Google Assistant. Introduced alongside the company’s chat app Allo, the Assistant received an encore with the release of Google’s Pixel. But what exactly can it do?

Google Home Versus The Amazon Echo

Amazon and Google’s virtual, voice-only assistants both allow you to carry out simple tasks. Asking questions like “who is Barack Obama?” or “how many cups are in a quart?” will offer up variations of the same answer. You can ask it to provide all sorts of information – the results of mathematic equations, the weather, or the latest headlines informed by your personal news settings. Every question you’ve asked can be revisited in the Google Home or Amazon Alexa app, even allowing you to play audio of your query so you can hear how the device hears you. These responses are stored in the cloud, which, depending on how paranoid you are, is unnerving. Equally unsettling: you’re actually handing over money to Google (or Amazon) to have an always-listening microphone in your home. So there’s that.

But when it comes to simple answers to random questions, Google Home completely blows Amazon out of the water. That’s because Assistant utilizes Google’s knowledge graph. If you’ve searched Google recently, you’ve noticed that answers to common queries have already been added to Google’s base of knowledge, appearing in the fact sheet Google puts to the right side or even above the first search result. So questions like “how much is the Google Pixel?” or “how tall is Pikachu?” result in usable answers from Google Home and very little from Amazon Echo. One foot, four inches, if you’re wondering.

For now, neither assistant will help you send a text or place a phone call, but that functionality is “a feature the team is working on” for Home, Google tells Popular Science.

If you want to feel you’re in control of your little robotic assistant, Alexa might hold the advantage for now: Alexa’s skill set may be limited, but users can design their own skills and functions for the device.

There are a couple more puzzling advantages in Alexa’s corner. Both Alexa and the Google Home will tell you what’s on your Google Calendar for the day, but only Amazon’s product will let you make a new Google Calendar event using voice commands. Which seems kind of silly, because, well, Google. And while both assistants will call you a ride via Uber, only Alexa can get you a Lyft. We could see the addition of Lyft support come in a Google software update. Or, if we’re really lucky, Google driverless cabs will soon be a well-placed whisper away.

A forte of both Google Home and Amazon Echo are their ability to play music. Google Home lets you choose between Google Play, Youtube Music, Spotify or Pandora while Amazon lets you choose between Amazon Music, iHeart Radio and TuneIn Radio, as well as Spotify and Pandora. With Home, you set your preferred music service when you first set up the device. Once you add a service, Google defaults to it without making you mess with any settings. Amazon lets you add music services to the Alexa too, but makes you choose your default within the Alexa app – and defaults right to Amazon’s own music service if you don’t.

Google Home’s integration with Google services may not expand to your Android phone (yet) but it does reach Chromecast. Ask Google Home to play something off of Youtube and your Chromecast-equipped TV will respond accordingly. We couldn’t get Home to do the same with video from Netflix, HBO Go or other services, but hopefully that will change soon.

And while you can’t connect Google Home directly to a speaker via bluetooth or auxiliary cable, you can play music to speakers you’ve equipped with Chromecast Audio, the $35 attachment that gives any speaker wifi. That’s pretty irritating if you already have a bluetooth speaker that you want to connect to the Google Home (which even has bluetooth built-in) but at least music over the Chromecast Audio’s wifi will sound better. On the other hand, Amazon’s products let you use aux cables and bluetooth to pair with almost any speaker you please – and are set to start integrating with the coveted Sonos wifi speakers within the next few months.

Amazon’s Echo also offers some unique small advantages in the wiring department. While the Google Home powers up using a DC power jack, the Echo uses micro-USB. That means you could use Alexa in your car (plugged into the cigarette lighter via USB adapter) or next to your laptop while working, no wall outlets required. Not common scenarios, perhaps, but worth considering for some.

But Amazon doesn’t have the Google Home’s nifty universal pause button. Anytime you want Home to shut up, you can tap its face to instantly hush it. Speaking of tapping: You can raise or lower the Home’s volume by circling your finger over the face of the device. That’s not an advantage over the Echo’s controls, per say, but it certainly makes us feel cool.

The Google Home and Amazon Echo both offer similar functionality in discrete form factors. At the end of the day, both the Home and the Echo let you raise your voice in your favorite room to save you from having to pull your phone out for one more thing. Amazon’s latest Echo, the $50 Echo Dot, is better if you want to use your virtual assistant primarily for music, since it lets you plug in any speaker you like via its 3.5mm audio jack or connect via bluetooth out of the box. Proper music support for the Google Home – assuming you aren’t satisfied with the device’s built-in speaker, which happens to be pretty fantastic for single-room use – means getting a Chromecast Audio from Google for an extra $35 on top of $130 for the Home itself.

If you plan on using your virtual assistant as an electronic fount of knowledge, however, Google’s got Amazon beat. Use of the knowledge graph means that Google can crawl popular sites and quickly serve up info that’s (usually) correct and succinct. Since Google is the company interested in indexing the world’s information, it’s not surprising that the Home is the solid choice for fact finding.

And for Android phone users, the hope of things yet to come may be reason enough to stay close to home and pick the Home. With better integration with the company’s phones on the way, you may one day find yourself wanting to call or text using Google Assistant. If so, Home may be the right always-listening base station to go with.