Hands-On With The Google Pixel, Daydream View, And Home

We put Google's brand new hardware to the test 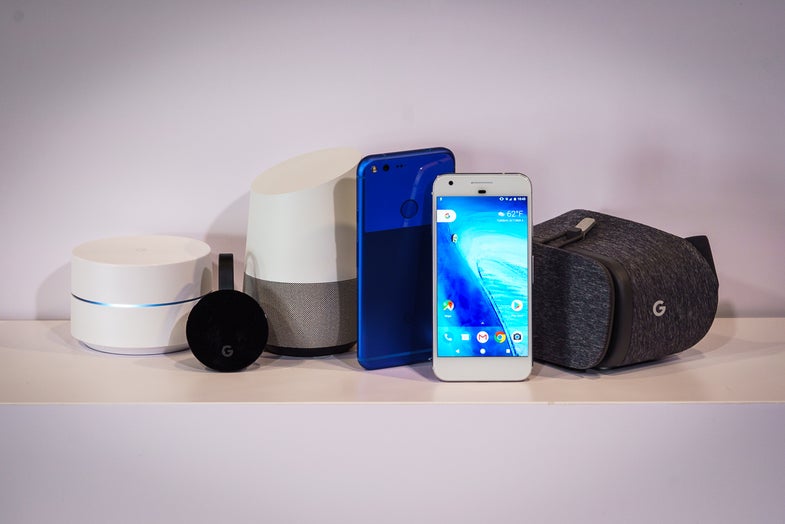 Today, Google announced a plethora of new hardware. Just now, at the event, I got to spend a little bit of hands-on time with the Pixel Phones, Google Home, and the Daydream VR viewer.

The first thing I noticed when I started playing with the Pixel Phone is that it’s fast. I didn’t experience anything resembling lag, no matter how many apps I opened.

Google is claiming that the Pixel has the best smartphone camera ever. While I can’t make a determination on that without doing some real testing, I will say that the camera was incredibly quick. By default it has HDR+ enabled, which always used to slow down the capture process. With the Pixel, the photos would fire off the instant I touched the shutter, and shots looked nice and sharp considering the low-light environment. Stabilization on the video side did an excellent job of keeping things smooth, even while I was purposely shaking like I was standing in an earthquake.

I also got to spend some time playing with Assistant, Google’s Siri competitor, and I was really impressed, not just with its speed, but with the level of information it could deliver. Saying, “Give me my daily briefing,” gives you a whole rundown on your day. Asking if there’s an REI in San Francisco pulled up the relevant info. I could then ask “How late is it open tomorrow?” and it would tell me the hours. “How long would it take to bike there from Pier 39?” and it gave me that, too.

I could ask it where Anderson .Paak is from, and it would tell me Oxnard, CA, and ask if I wanted more info about Oxnard. Most of these are things that Google Search has been able to handle for a while, but there’s a level of polish and smoothness with Assistant that I haven’t seen before. It worked really well.

The phone is solidly built. I loved the way the five-inch Pixel felt, size-wise. The Pixel XL was a bit more of a stretch, but considering it has a bigger battery and it’ll work better in the Daydream VR viewer, I might still lean toward that one. Both phones have big blank spaces at the top and bottom of their screens, which really seems like wasted space. The two-year-old Google Nexus 6 did a much better job of utilizing that real estate. The phones have two speakers on the bottom. I prefer stereo speakers at the top and bottom, but it does pump out a good amount of volume.

Overall, I was really impressed by the design and performance, and I’m looking forward to really putting these phones through their paces. I’ve been waiting to upgrade my personal phone, and the Pixel is my new leading contender.

I got to spend a few minutes in the virtual world with Daydream strapped to my face. It really doesn’t feel like any other VR viewer I’ve tried. It’s softer, lighter, and far more comfortable. It did let some light leak in around my cheeks, which I found a bit distracting, but I quickly forgot about it.

I was using the viewer with the Pixel XL, which has a bit more screen real estate and more pixels to work with. You drop the phone into the case and NFC puts it in VR mode. The phone sleeve uses six magnetic dots to auto-adjust the image so it’s nice and sharp, even if you didn’t line it up perfectly. Really smart.

Once on, I found that the image was really clean, bright, and colorful. The lightness of the rig was noticeable right away and I quickly become immersed in the experience.

The controller (which stows inside the Daydream when you aren’t using it) has a capacitive thumb pad which is also clickable. There are two buttons below it. The top one is for contextual actions within various apps, and the bottom one is your home button, so no matter what you’re doing you can long-press it and it’ll take you back to Daydream’s home screen. The controller also has gyroscopes and accelerometers, so when you’re in the home menu it works like a laser pointer. You can see what you’re pointing at and click it. Long-pressing the home button also resets the orientation of the viewer and remote, so if you’re wanting to use it while lying on a couch, or swap it with someone facing you, it will adjust so that everything is lined up and facing the right way.

I only got to do three quick demos, but I was impressed with the quality of the experience. The comfort really added a lot, and the menu system was more intuitive than any in-VR system I’ve used yet. I am really looking forward to spending more time with it.

The first thing that surprised me was how small Google Home is. From the photos I’d seen, I thought it was the size of a large vase. Turns out it only stands as high as your standard wine glass. It would sit nicely in an open palm. For its size, it really puts out a good amount of sound — at first I thought it was paired with an in-room speaker. It was clearly audible even in a crowded, noisy room. It’s subjective, but I thought it was pretty good looking. Yes, it kind of looks like a Glade air freshener, but if I’m supposed to be putting these around my house, I’d rather that than it looking like an industrial router.

Again, Assistant really impressed me with what it’s capable of doing. You can ask it how many calories are in something you’re about to eat, or what’s a decent substitute for cinnamon, if you’ve run out. In the bedroom you can set it to be your alarm, and you can snooze it with your voice alone (which would be dangerous for a lot of people I know, myself included).

Ask it for your daily brief and it will give you a rundown of the time, the weather where you are, and everything on your agenda for the day. If you want specific information about any of those items, you ask and it’ll give it to you.

You can also say, “Okay Google, what’s in the news?” and it will read through a news briefing that goes in an order you determine, from news sources that you’ve chosen. It worked nicely.

I was skeptical during the announcement, because the presentation was fully canned. There wasn’t a Home on the stage, so of course it looked good in the demo. From my hands-on, though, it seems to live up. It handled all of my questions without hesitation.

It seems a whole lot more useful than Amazon Echo. Because Google has a more complete ecosystem and access to more of your personal data, Home is able to integrate deeper into your life. Google’s intelligence when it comes to context is a big factor, and that makes interacting more intuitive. Do you want Google to have all that information about you? That’s a question you’ll have to ask yourself, but if you’re already embedded in the Google ecosystem (using Google Calendar, Maps, YouTube, etc.) it’s just one small step beyond that. If you aren’t in the ecosystem, well, maybe the promise of a smart home that’s actually smart will entice people to take the plunge. That’s what Google is hoping anyway.

Regardless, the products Google announced today all seem to be high quality and innovative. We’ll be reviewing them in more depth as soon as we get take-home review units, so check back for the deep dive.