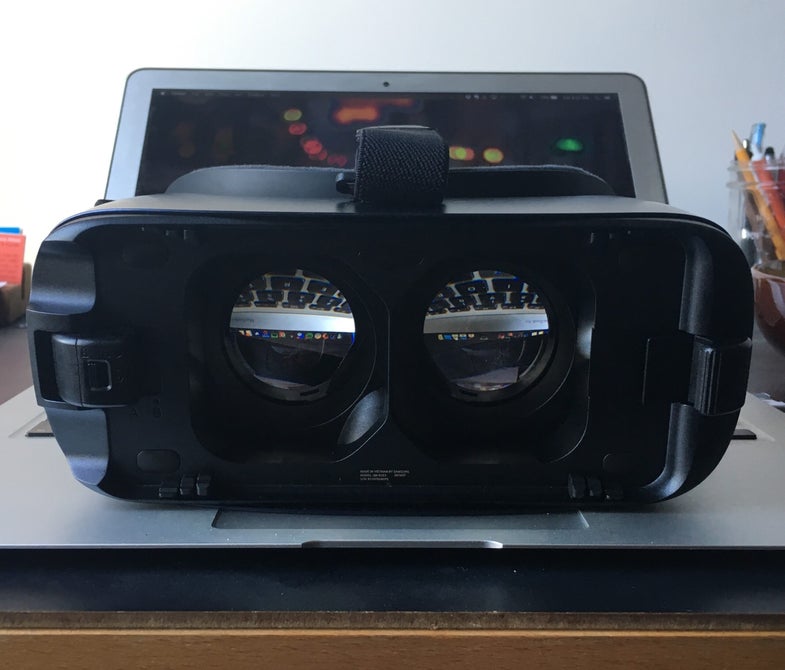 The new Gear VR has been revealed. Here's what we think. Xavier Harding
SHARE

2016 remains the year that virtual reality came to store shelves. Options like the cost-effective Google Cardboard, the console-specific Playstation VR and the bank account-ruining HTC Vive and Oculus Rift mean there are more options than ever for escaping base reality. And then there was Samsung’s brand of virtual reality: a headset based around inserting your smartphone into the visor that supported Oculus apps and—best of all—cost $99. For many people, especially Samsung owners, this is the most accessible and a good VR option. And with the new version of the Gear VR, the South Korean electronics company is making their offering just a bit better. 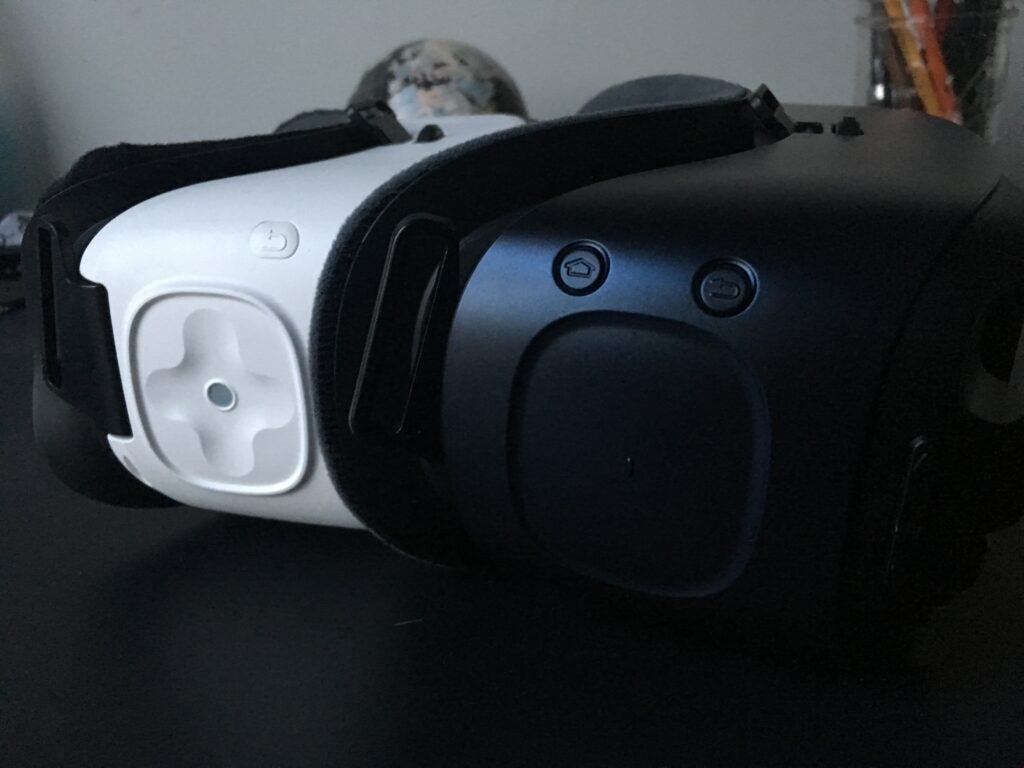 Larger trackpad, and a dedicated home button come to the Gear VR 2016

What is the Gear VR?

For the uninitiated, Samsung’s Gear VR can be seen as a step above Google’s ultra-affordable Cardboard offering. Both require you to insert a smartphone into an apparatus that you wear on your face. Both use biconvex lenses to let you see your smartphone screen up close and have it look normal—allowing you to enter an environment or even a watch 360-degree video and pan around using just your head. The two headsets offer buttons on the side to let you navigate in virtual worlds.

Though anyone who has used both knows that’s where the similarities end. Google Cardboard works with a variety of devices, including Apple’s iPhone. Samsung Gear VR only works with Samsung’s latest phone devices. Devices which, along with usually packing more raw power than a modern iPhone, were created by Samsung with some virtual reality uses in mind. This leads to apps and experiences that are closer to the gaming-like VR headsets than Google Cardboard-brand VR.

You won’t get full games like EVE: Valkyrie on the Gear VR, like you will on Oculus and Playstation VR. But the smaller, yet still capable, EVE: Gunjack properly depicts the comparison of what type of games you can get on Gear. 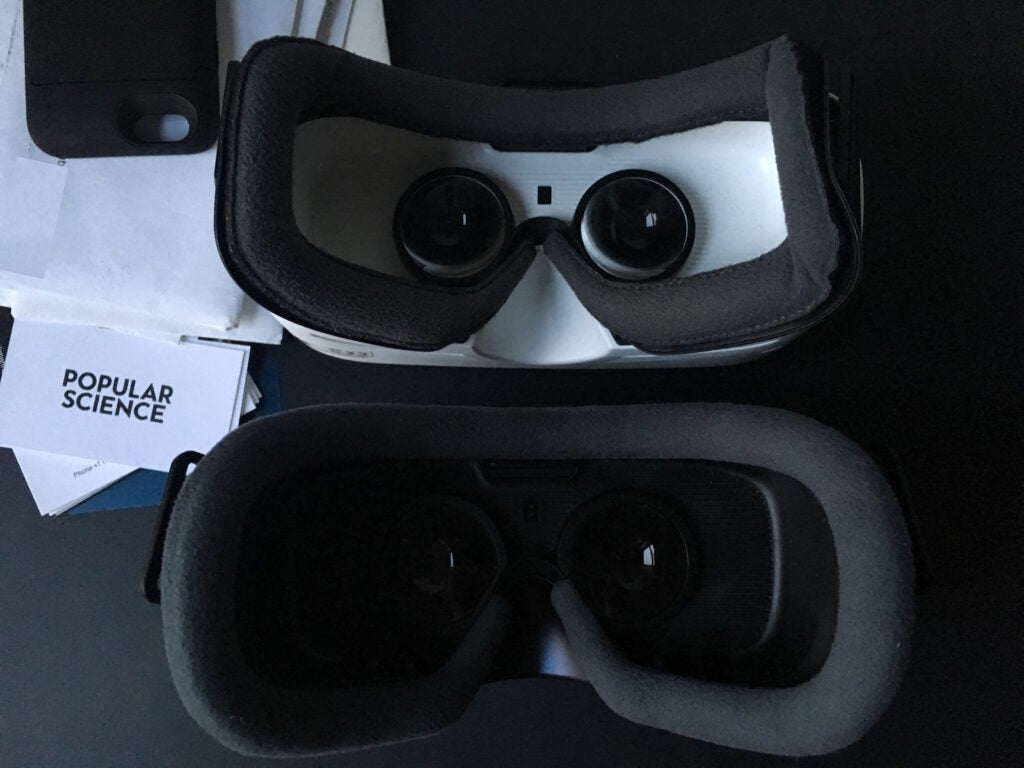 The 2016 edition offers a wider field of view

What’s New About This Gear VR?

Most of what you’ll find about this Gear VR is very similar to the last. Same design and same features all for the same $99 price. Then what has changed?

The most obvious change to the Gear VR is the new darker body. The new Gear VR is best described as dark blue, not quite black. But despite not being as dark as possible, the new dark blue color is already better than the original’s white interior and exterior. While on the outside this makes little difference, the darker insides greatly improve viewing VR content in brightly lit rooms. Before, light from the outside would distract from the game-playing or movie-viewing experience.

Samsung has also improved what you’ll see when wearing the Gear. The field of view has increased to 101 degrees, up from 96 previously. Meaning you’ll be able to see a bit more on screen.

Another change, most noticeable for owners of the previous Gear VR is a change in port support—a USB C connector and charging port has been swapped for the legacy micro-USB standard, which speaks to the larger point of this device: the Gear VR, along with supporting Note 5, S6 devices and S7 devices, will also be the Gear to support the new Note 7. If you plan on buying this phone, the choice of which Gear VR device you’ll need is an obvious one.

Charging the phone while inside the VR headset is possible with the port on the side, but you’ll want to use the Samsung provided cable. Those using older Samsung phones can make use of the micro-USB adapter included in the 2016 Gear VR’s packaging. 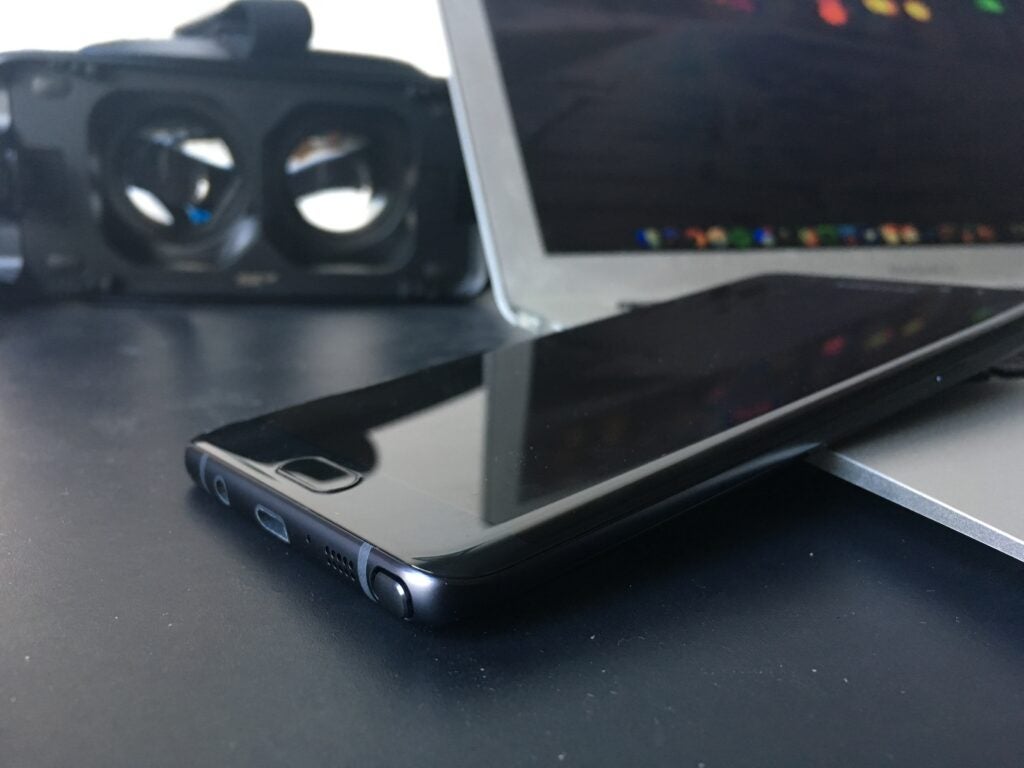 Should I Toss My Current Gear VR And Line Up For This One?

Not necessarily. The new version of Samsung’s Gear VR is objectively better than last year’s model—if only for the darker body and increased field of view. But users of both Gear VR units old and new can make use of the same Oculus software (provided they have a relatively new Samsung device). Meaning you can still enjoy Samsung’s great, but not excellent brand of VR. For $99, you won’t be able to walk around video games by moving around your room like the HTC Vive, or play Star Wars Battlefront in VR like on Playstation. But watching Netflix in a personal movie theatre or flying through space shooting aliens adds value to owning a Samsung device. And the price of admission may be worth it alone for the look on your friends’ faces when they first enter virtual reality.

The most notable change to this Gear VR only takes effect if you have the latest and greatest Samsung device: the new Note 7. Samsung’s Note 7’s improved internals like the 5.7-inch AMOLED screen with 518 pixels per inch, 3,500mAh battery and 4GB of RAM are most important to delivering a solid virtual reality experience.

Knowing this, the only Samsung buyers that should feel compelled to opt for the new Gear VR are first time Gear VR buyers or new Note 7 buyers. Those currently with a functioning Samsung VR helmet won’t find enough new features to sway towards an upgrade. Though if a better field of view and darker paint job is worth it to you, $99 is a drop in the bucket compared to most virtual reality price tags.