Could Climate Change Cause The Next Cholera Pandemic? 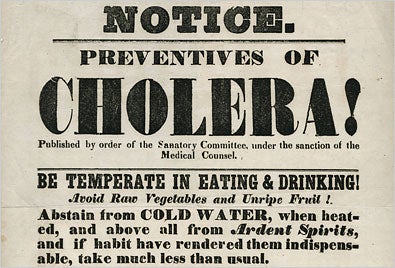 Throughout history, only a few pathogens have made historical impacts on human health. One of these is cholera. Caused by the bacterium Vibrio cholerae this potentially fatal disease has caused more pandemics than influenza, plague and smallpox. The most recent, the seventh, occurred in the 1960s when many parts of Asia suffered for four agonizing years.

Today, cholera has been for the most part controlled and limited to only a few places such as Bangladesh and Haiti. These countries appear to have seasonal intervals of infection and are continuing to be monitored. Yet, since the early 1990s, the concern for another pandemic has been haunting public health officials. What makes their worry more pressing is the fact the oncoming onslaught may be due to a factor seemingly out of our control: climate change.

Changes in climate are not limited to levels of atmospheric carbon dioxide or recorded temperatures. Though these are the factors gaining the most headlines, other factors play a role in determining climactic shifts. One of the most important in terms of cholera is the interface between the atmosphere and the ecological niche of the oceans. Changes in ocean patterns can lead to dramatic shifts in weather such as the El Niño Southern Oscillation. Other changes also occur resulting in global variations of local climatic conditions. Skipping over the debate over what might be causing these shifts, the reality is they are occurring and can impact how and more importantly where pathogens live, thrive, and infect.

In the context of cholera, changes in climate are stressors on microbes forcing them to either die off or figure out means to adapt to the conditions. In Bangladesh, this has been shown through the evolution of the classical strain to one known as El Tor. This particular strain relies less on seasonality and occurs more frequently. The overall result is a year round threat of infection as opposed to only during the rainy season. As to the reason behind this variant, the cause appears to be related to less divergence between the rainy and dry seasons. This has allowed the El Tor strain to develop resistance to drier weather over time such that it can survive in any climactic environment.

But the emergence of a new strain does not a pandemic make. In order to cause global troubles the bacteria also have to spread out and become endemic in a variety of regions. To accomplish this, they need proper temperature and food sources, which too can be aided by climate change.

In 2011, several possible factors were examined to determine if one or a combination could lead to intensified growth and transmission of the bacterium. There were two specific factors implicated, none of which had to do with temperature. The included a higher level of discharge from rivers into the oceans and the level of phytoplankton. Interestingly, the temperature of the sea surface was not implicated as a factor. Although higher temperatures did coincide with more cholera outbreaks, this wasn’t universal. Without discharge, there was little chance for an outbreak.

With this evidence in hand, the potential for drawing a map of at-risk areas could be developed. Last week, an international team of researchers who undertook the task revealed their results. They developed a global map where cholera may be able to live currently as well as into the future. Based on the findings, there is every reason to believe we are on the verge of another pandemic, and this time, even North America may see a return.

The team used 12 environmental variables attained from an existing marine dataset called Bio-ORACLE. These included climate-associated factors such as sea surface temperature, sunlight, and levels of microbial growth. The others focused on physical attributes such as salinity, pH, dissolved oxygen, nitrate and phosphate levels. From there, they examined regions known to have cholera growth. From this analysis, they were able to define a list of parameters necessary to harbor, grow and spread the bacteria.

At this point, the team went looking at other areas around the world for similar environmental conditions. Using statistical analysis, they were able to determine suitability as a percentage. The most likely places had at least a 50% chance of allowing enough growth to cause an outbreak. They performed this for current climactic conditions and for the year 2100.

Although the authors expected to find more than a few places where cholera could survive, the data showed an almost-global distribution of environments prime for growth. These included expected areas such as Peru, Ecuador, West Africa and parts of Australia. But some regions were completely unexpected such as the North Sea, regions south of the Scandinavian countries. In the American context, the Gulf of Mexico and the entire East Coast of America would also be prime spots for cholera to grow.

As for the year 2100, the situation was dramatically worse thanks to climate change. Some of the most northern regions of the world, including the Pacific Northwest, Hudson’s Bay in Canada, the west coast of Ireland, and the northern tip of Russia all could support cholera. The Southern hemisphere also would suffer, though not as much. Temperatures played a more significant role in this case but still required other climate-change-related factors to ensure survival.

The results of the study reveal we are already in a position for another cholera pandemic. The locations are just waiting for the bacterium to invade and conquer. Although the likelihood of this occurring is minimal, for public health officials, knowing these regions exist is at least an early-warning system. The information from this exercise also offers the ability to monitor climate change into the future to look for any suspect changes at the local level. If sudden shifts occur, public health officials can be given warning so they can increase surveillance and prioritize cholera-prevention awareness. Although this work may not stop the eighth cholera pandemic from happening, it can at least give us a fighting chance.