Sniffing The Feet For Infection

An e-nose may one day quickly diagnose diabetic foot infections 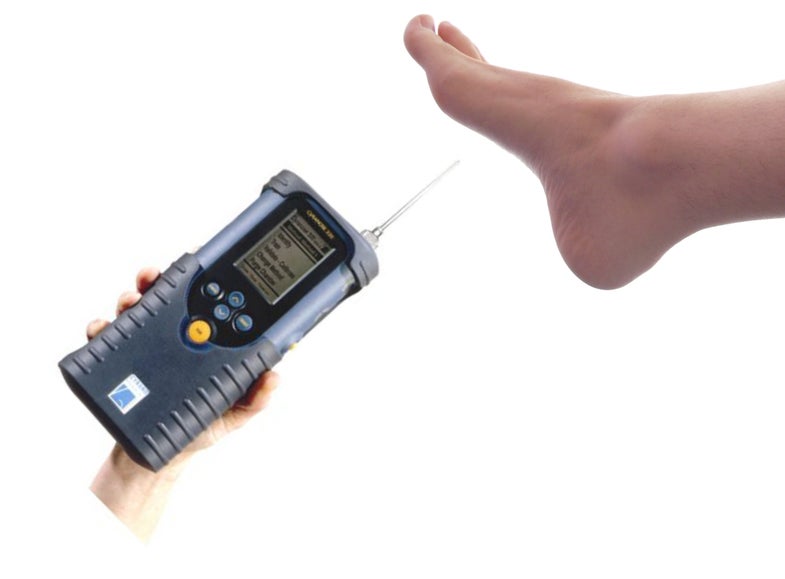 Long before rapid analysis of bacterial cultures, the most common way to quickly determine the nature of a bacterial culture was to smell it. Just open up the petri dish or the test tube, inhale and the odors would provide some clues as to which species were growing inside. Pseudomonas aeruginosa has a distinct grape smell. Escherichia coli has a distinct fecal odor. Then there are the staphylococci. Staphylococcus aureus smells like decomposition while S. epidermis smells like old sweat.

The trick to olfactory identification lies in the byproducts of growth. Many chemicals are volatile and can be picked up by a trained nose. It should come as no surprise these chemicals have been targeted for rapid diagnostics. But the human nose isn’t perfect so researchers have gone technical to develop sensors to mimic our nasal receptors.

Electronic noses have come a long way over the years since their introduction in the 1980s. The majority have focused on those volatile organic compounds, also known as VOCs, to best identify what microbial population may be causing disease. With the proper sensor, an infection can quickly be picked up and treatment can begin.

There are already examples of effective e-nose diagnostics. One of the most successful detects tuberculosis. The VOCs from this species are quite unique and can be detected in sputum as well as breath. Gastrointestinal diseases may also be picked up by electronic olfactory sensors. Even blood and urine are being investigated as possible sources of VOCs.

Now a new version of e-nose has arrived with a specific focus on the foot. An Asian team of researchers has shown an e-nose can detect microbial species in diabetic food infection. Though focusing on diabetic feet may seem odd, the authors reveal just how important this infection is to healthcare and quality of life.

Diabetes has several complications including issues with the feet. When infections take over, they can be difficult to resolve and unfortunately, the only resolution is amputation. At one time, this problem wasn’t widespread but with the increasing rate of diabetes, particularly in the United States, it has become a serious issue. The cost to healthcare is at least 1.6 billion dollars annually but that pales compared to the heartbreak to both patient and loved ones. The situation is made even worse as it can be prevented or at least controlled with early diagnosis.

Unfortunately, this is not possible as the most common route for determining microbial species is culture. This can take upwards of a few days prior to analysis. In this short amount of time, the bacteria in the wound can grow to significant numbers and possibly enter the bloodstream. The only way to prevent this is by reducing the time necessary to a matter of hours or even minutes.

The authors of the study aimed to figure out how to rapidly detect an infection so early treatment could begin. To accomplish this, they had to first figure out what bacteria played the greatest role in causing damage. They did this by taking samples from infected feet and culturing them. They found three major contributors, P. aeruginosa, E. coli, and S. aureus.

The next step was to design the nose so it could pick up the VOCs from these three species. They used a machine known as the Cyranose320. It looks like a walkie-talkie when you hold it but it has no speaker or microphone. Instead, it has an air collector attached to an array of 32 sensors. Together, these detectors are capable of identifying the VOCs from six species, including the three found in the diabetic foot infections. This can all happen in less than a minute. The hope of the study was to utilize the Cyranose320 to accurately identify the species found in clinical samples.

The experiments were quite simple. The team grew up the infections on various microbial media and then put the sensor to the test. In single-species infections, the rate of both sensitivity and specificity was near perfect. When polymicrobial cultures were analyzed, the same results were seen. The team could pick up exactly which species were present. It was a total success.

There was, however, a catch. In order to perform the tests, the group had to culture the bacteria prior to analysis. They never tested the Cyranose320 with actual patients. Yet, the results suggest this is the next logical step and should be done in the future.

Although this was in essence a proof-of-concept, they had shown the potential benefit of the e-nose. With continued testing, this machine could help to increase the speed of infection detection as well as lessen the time needed for proper treatment. Should this become reality, those who suffer from the scourge of a diabetic foot ulcer may soon be able to regard this complication as manageable without worrying about the worst case scenario of losing this most valuable part of our anatomy.