No, really. Amputees have been testing them for over a year 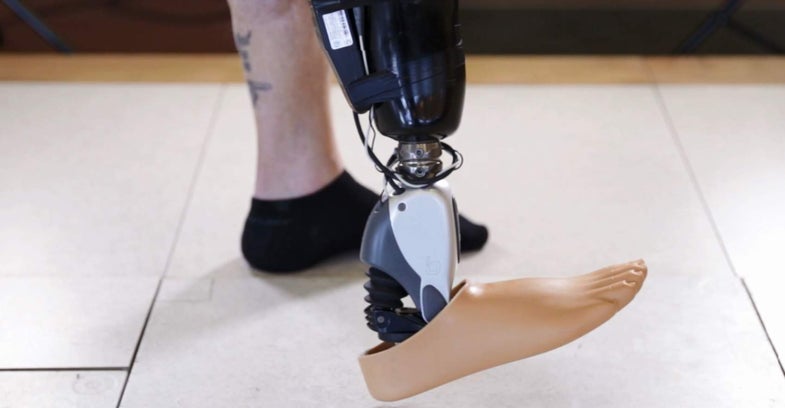 For a full decade, Gudmundur Olafsson was unable to move his right ankle. That’s because it wasn’t there. Olafsson’s amputated lower leg was the delayed casualty of an accident from his childhood in Iceland, when he was hit by an oil truck. “I lived in pain for 28 years,” says Olafsson. “After 50-plus operations, I had it off.” For years after the operation he wore a Proprio Foot, a prosthetic with a motorized, battery-powered ankle, sold by the Reykjavik-based company Ossur. The Proprio is essentially a wearable robot, with algorithms and sensors that automatically adjust the angle of the foot during different points in its wearer’s stride. Olafsson’s ankle moved on autopilot.

But 14 months ago Ossur upgraded his hardware. Now, at age 48, Olafsson can move his right ankle by thinking about it. When the electrical impulse from his brain reaches the base of his leg, a pair of sensors embedded in his muscle tissue connect the neural dots, and wirelessly transmit that signal to the Proprio Foot. Since the command reaches the foot before the wearer’s residual muscles actually contract, there’s no unnatural lag between intention and action. That makes Olafsson part of a highly exclusive club. Along with David Ingvasson, a fellow Ossur tester, he’s one of the only people on the planet who owns a brain-controlled bionic limb. Ossur unveiled its implanted myoelectric sensor (IMES) technology today at an event in Copenhagen, and is now preparing large-scale clinical trials, in the hopes of reaching the market in three to five years.

“The first time, to be honest, I started to cry.”

This is a bigger breakthrough in the field of robotics and advanced prosthetics than it might appear. Brain-controlled bionic limbs make headlines on a regular basis, with the implication that the science has been solved, and experimental systems are already transitioning to products. But most of those devices are confined to laboratories, and many require complex surgery, such as transplanting muscle tissue or implanting electrodes in a subject’s brain. These devices look like the real thing in brief, sometimes compelling video clips. But so far, prosthetics that respond to thoughts are not so much a reality as a promise. 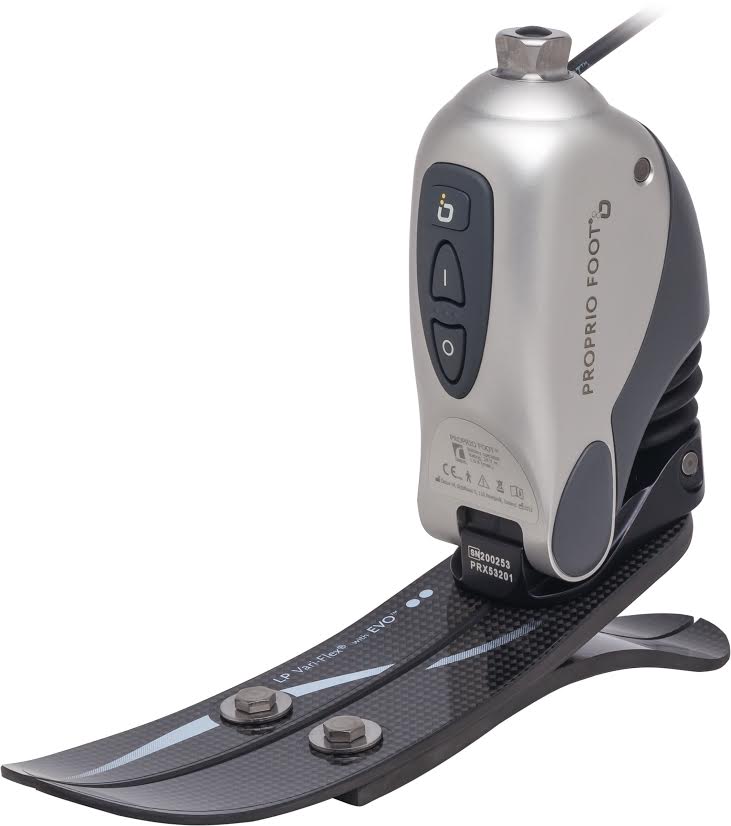 Ossur’s sensor-linked limbs, meanwhile, have stood up to the abuses of everyday activity in Iceland and England (where Olafsson now lives). During the 14-month testing period, the company’s two “first-in-man” subjects have worn the devices as their sole prostheses. Ossur checks the equipment and collects data, but the limbs are theirs. And the surgery to implant the sensors was minimal. According to Thorvaldur Ingvarsson, an orthopedic surgeon and head of R&D at Ossur, the procedure took 15 minutes, and each sensor required a single-centimeter-long incision. The tiny sensors (3 millimeters-by-80 millimeters) are powered by magnetic coils embedded in the socket — the cushioned, hollow component that fits over a user’s residual limb, and connects to the prosthesis. Since there are no integrated batteries to deal with, there’s no need to replace the sensors (unless they fail for other reasons). “We believe this is a lifelong sensor,” says Ingvarsson.

Another thing that differentiates this mind-controlled prosthesis is its simplicity. The sensors, which were provided to Ossur by the Alfred Mann Foundation, don’t have to be attached to specific nerves. That also means that tissue doesn’t have to be harvested from other, more nerve-dense parts of the subject’s body. The prosthesis moves based on which sensor—the front or rear—picks up an impulse in local muscle tissue. If Olafsson moves his calf muscles, the robotic foot follows suit. “It’s really surreal,” he says. “The first time, to be honest, I started to cry. You are moving the ankle, and I basically haven’t had one in 11 years.” 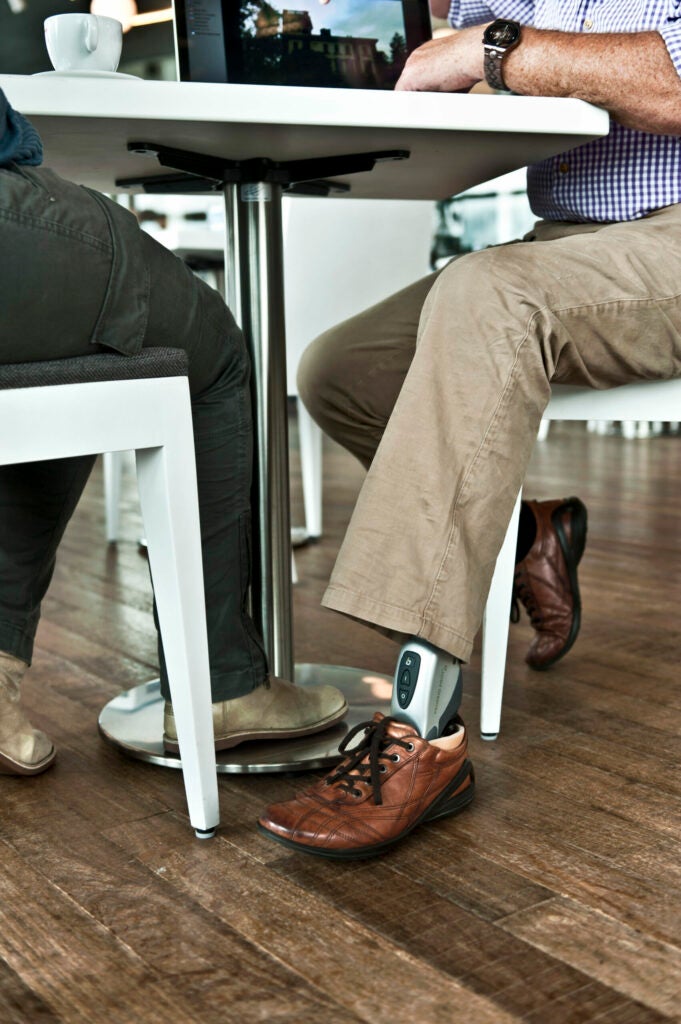 One major advantage of sensor-control, says Olafsson, is the way it redistributes your weight. When climbing stairs or hills, or even standing up from a chair, he typically favored his “sound leg.” This sort of activity is common, and part of the problematic morphology that comes with lower-limb amputations. Advanced prosthetics can appear effortless, but even a subtle shift in balance can lead to serious joint and back problems over years and decades, shortening lifespans. Now, Olafsson can rise from a chair without straining his non-prosthetic leg.

“It’s the next generation that’s really going to benefit from this.”

But the biggest benefit he’s seen is a surprising one. “You have to learn how to use those muscles again,” says Olafsson. “How to tighten them up, in front and back. And that’s the main thing. Those muscles start getting bigger, so you get better at walking. I have more stamina. My gait is better. I don’t limp as much.” By forcing the wearer to actively use muscles that were previously ignored, sensor-connected limbs could halt or reverse their deterioration. It’s a reminder that, despite the urge among the able-bodied to obsess over cybernetic enhancements, bionic limbs are chiefly medical devices for now, designed to restore function. That a brain-controlled bionic leg would also promote muscle growth is stranger, and more exciting, than all of the superpowered cyborgs that science fiction has to offer.

Ossur hasn’t revealed how much the IMES technology will cost, but it already works with the company’s existing lineup of advanced prosthetic feet, knees and integrated legs. And as more amputees get access to this system, Olafsson hopes it will head off the bad habits and muscle atrophy before they set in. “I’m not doing this for me,” he says. “I’m already old. It’s the next generation that’s really going to benefit from this.”