Scientists Are Studying Subway Germs To Keep Us Healthier

But first they need to swab for them... 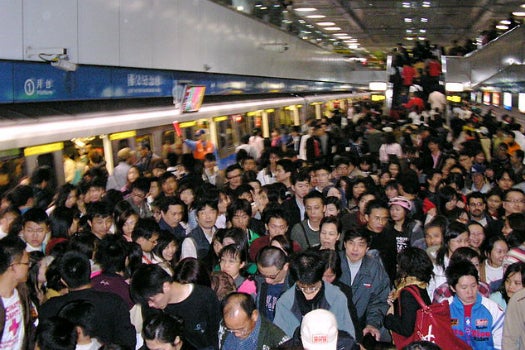 Just as we talk and fight amongst ourselves, so do our microbes. “Your dirty bag hit my leg,” snarled a manspreader as I squeezed into an adjoining seat on the NYC subway over the weekend. “Are you going to apologize, or I’ll slapped [sic] you!”

Apologies, dude. But as much as you fear purse cooties, it’s impossible to escape germs. While millions of riders are jostling daily for seats, far more microbial organisms (bacteria, archaea, fungi) are duking it out on the subway’s surfaces, says Christopher Mason, a geneticist at Weill Cornell Medical College. Germs do make us sick, but it’s increasingly obvious that our health also depends upon the microbes living inside our bodies (the human microbiome), and in our built environment. While subways are a defining characteristic of the daily commute for people worldwide, little is known about how they shape the life of germs.

Earlier this year, Mason and colleagues began to fill in the gaps with the first system-wide DNA map of the microbial species–from humans, animals, plants, and pests–that make up the subterranean stew. Most striking was that nearly half of this DNA didn’t match any known orgasm. But it’s a baseline for planning and public health experts who imagine that the subways of the future will be designed to maximise the colonization of healthful germs. As a consequence perhaps, the Alfred P. Sloan Foundation has ponied up money to launch an investigation into microbial ebb and flow in subway systems worldwide (despite local exuberance, NY is only the seventh busiest in the world).

This past Saturday at the New York Genome Center, Mason convened the first annual international conference of scientists for this purpose, dubbed “MetaSUB.” It dovetailed with “Microbes in the City,” a New York Academy of Sciences event the previous day, a warm-up session for built environment microbiology.

At MetaSUB, talk focused on the nuts and bolts of study design and interpretation. Collecting enough DNA could be challenging in hygiene-happy Tokyo, where custodians may scour surfaces several times daily. This is not a concern in New York, which, if it is laid back about one thing, it is cleaning. The NY MTA aims to pick up every several weeks, while in Boston, Curtis Huttenhower of Harvard’s Public Health School reports MBTA’s reply to cleaning was: “We don’t.”

Another issue is finding enough folks to swab the subway’s surfaces. For his first study, Mason had an army of students and volunteers collect 1,450 DNA samples from seats, handrails, doors and turnstiles. Volunteers are the lifeblood of microbiome studies, from Sao Paulo to Tokyo. In fact, Mason’s group is actively recruiting volunteers for a new New York subway “Swabventure” that will take place on July 15.

The goal is “to shift the paradigm of urban design” by putting the microbial ecosystem front and center. One day harried commuters may be rushing through probiotic-infused subway tunnels. But first, there’s the challenge of accurately identifying organisms, as Mason’s group learned first hand when they turned up snippets of DNA resembling Yersina pestis, or bubonic plague–but which could also have matched to other organisms.

While Yersina pestis is not a native New Yorker, The New York Times has reported that it does break out in the Western United States, where it’s carried by “flea-bitten wild animals.” I am from the West. But I wasn’t hiding a prairie dog in my purse on the Manhattan bound F train last Saturday.

To the subway rider who exchanged words with the manspreader: thanks for defending my germs.