This smart monitor and streaming TV combo can handle casual use but might be too clunky for the working zillenial. 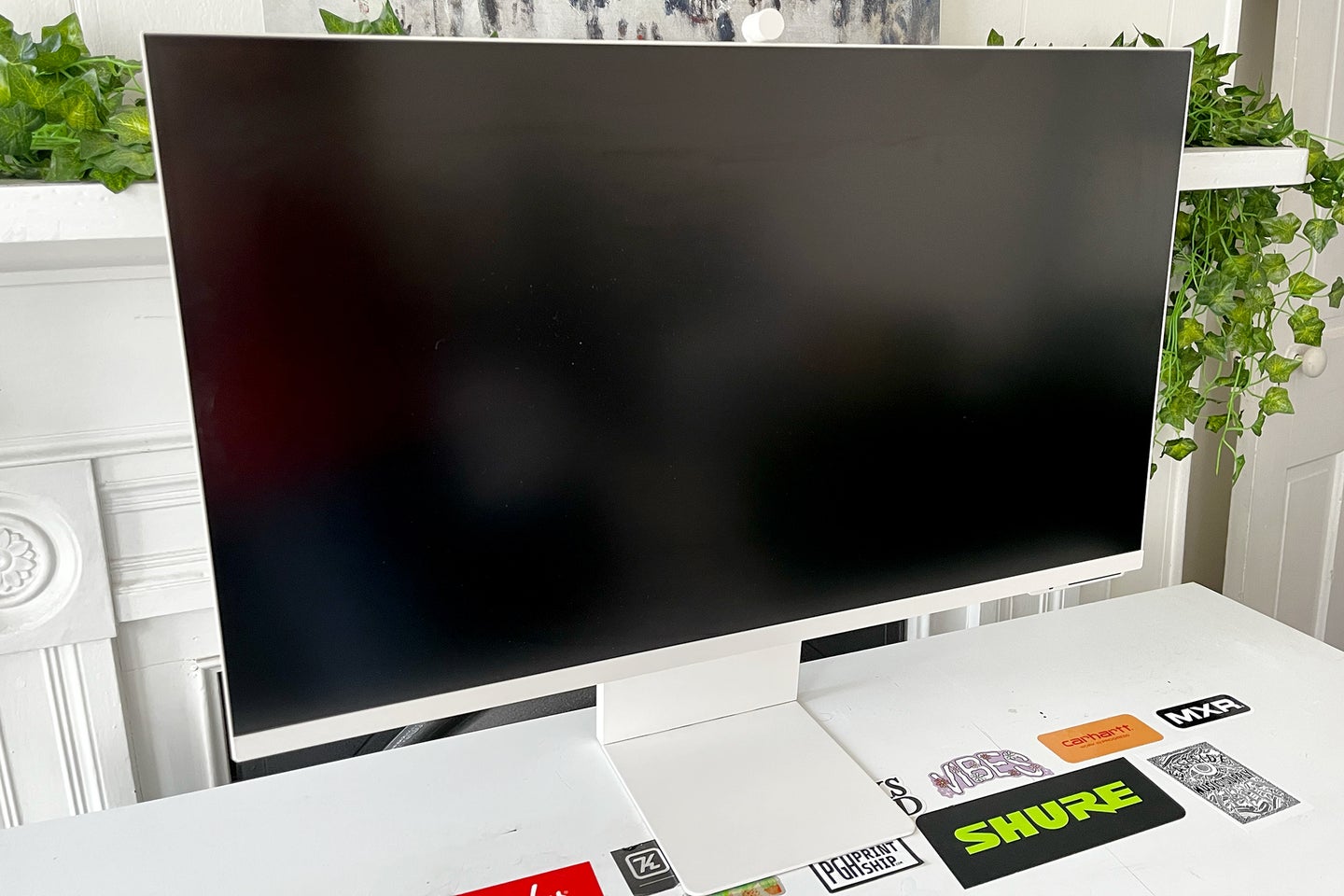 The Samsung M8 can be used as a TV, a display, or a stand-alone computer. Amanda Reed
SHARE

Click the #SamsungM8 tag on TikTok and you’ll find results filled with young Gen-Zers and zillennials sitting at aesthetic desk setups loaded with every piece of pastel desk tech. It’s all tied together by the minimalist and stylish 32-inch display from Samsung, which hit store shelves in spring 2022 after debuting at the Consumer Electronics Show in January of this year. Samsung promises you can use its fashionable panel as both a TV and computer peripheral. While it performs each task admirably on its own, it has some trouble in the transitions. For an expensive device, using the quirky Samsung M8 monitor might be a high price to pay for a TV-meets-display.

The Samsung M8 looks like a cousin of Apple’s 24-inch iMac or its high-end 27-inch Studio Display. It comes in four colors—warm white, spring green, sunset pink, and daylight blue, with the latter three colors costing you an extra $30. The front of the 16:9 UHD display includes small bezels and a thin display that make it as compact as possible for a display with this much screen real estate.

The back of the display features white plastic embossed with a houndstooth-like pattern and a raised “Samsung” logo, a port for the removable SlimFit camera, two USB-C ports (including one that supports 65W charging for a connected device), and a mini HDMI port. The M8 also comes with a power brick with power cable, a mini HDMI to HDMI cable, a USB-C to USB-C cable, the M8’s slim white remote that charges via USB-C, and the SlimFit camera.

I received the white color based on personal preference. I stand by that decision since the green, pink, and blue colors are only featured on the front display and stand. The monitor’s included stand can’t pivot, but it does feature a 5-inch height adjustment and a decent amount of tilt, letting you shift the screen from -15 degrees to 2.5 degrees.

The 4K (3,840 x 2,160) HDR10+ display includes adaptive picture and sound, which changes the 400 cd/㎡ brightness and volume based on your surroundings. Combined with the back-facing speakers—which are a little lacking in bass but do well enough for the standard listener—casual gaming and watching TV are rich in sound and color.

The M8 also is compatible with Amazon Alexa and Bixby for voice controls and can be used as an Internet-of-Things hub for your smart devices, allowing you to control them all using the M8.

Getting started with the Samsung M8 monitor

As with most monitors, setup is simple, but there are a few extra steps beyond what you might be used to. Physically, all you need to do is pop the lightweight display onto the heavy stand, plug in the power adapter, and turn it on. Then you will have to make a Samsung account to set up the M8, even if you’re just using it as a monitor at the moment. Additionally, you can only set it up using your smartphone or remote control—no plugging-and-going here—and you have to enter your ZIP code and what room the device will be located in. This is most likely to use the M8 as a control hub for your homes’ IoT devices but could read as skeevy to the privacy-inclined.

Using the monitor can sometimes prove frustrating. If you find yourself thinking, “am I dumb, or do I have to read the directions?” you won’t be alone. Although the included Samsung TV Plus app is great for free television, It always greets you with “South Beach Tow” or an animal documentary when turning it on—including if you’re just using it as a monitor. And learning how to turn this off required a crazy amount of internet searching to find out it’s buried under what felt like 14 levels in the app settings. Although the remote control features lots of preset buttons for streaming, I made between 5-7 button presses on average to pop around to other apps. Then I found out you can use voice commands to more easily switch to PC.

Although Samsung boasts of being able to use the display as a standalone computer, the Tizen operating system can’t keep up with the day-to-day. I could log in to my email via the web, but Tizen’s user interface is too clunky for regular use.

The M8 boasts built-in Microsoft 365, but it’s extremely slow. I tried powering up Word, went to grab a La Croix from the fridge, and was still waiting for it to load by the time I got back. Without a separate computer, or DeX loaded onto a smartphone or tablet, the M8 can only be used for casual searching with Tizen.

As someone living in a 600-square-foot apartment, the M8 took up almost all of my 40-inch desk space. VESA compatibility, which the M8 lacks, would have fixed that with the help of a monitor arm or wall mount. It’s worth noting that there are third-party monitor adapters you can purchase to give the M8 VESA compatibility. I popped on a video call using Google Meet, and the face tracking feature didn’t work, as I realized it only works in Google Duo. The 1080p camera, which only made my office-bedroom look decent, couldn’t pivot down enough for me to be seen.

When I put the M8 in my living room to see how it works as a standalone TV, I noticed it’s truly made for watching at your desk. At 32 inches, it’s a little too small to place on a TV stand and watch from a couch more than 3 feet away. However, up close the screen (featuring a 3000:1 contrast ratio and 99% sRGB coverage) and sound were adequate. I watched “Russian Doll” on Netflix and didn’t feel I was sitting in the dark when watching night scenes. And Natasha Lyonne’s signature rasp was clear, but not astounding. The M8’s remote can be used as a universal remote—something I found out the hard way by turning on my regular TV, which was behind the M8.

I also used the M8 to get my zen on thanks to the YouTube channel “Yoga With Adriene.” I got to the video I wanted to watch quickly enough using the remote’s voice detection, but it would have been more accurate if I typed it in. It would have taken me longer, but the voice detection can get tripped up … and don’t even try searching for “capybara” and expect success.

Connecting Bluetooth devices is simple, but I had to purchase a Bluetooth mouse to use the M8 as a standalone computer, as it would not read the USB receiver plugged into my multiport adapter. You can only use the remote to control the home screen and computer volume even if you have a mouse connected, and there is no button that automatically switches between TV and display capabilities, which would have saved at least 10 button presses. You can use Bixby or Alexa to switch to a PC, but I’m surely not the first M8 user who doesn’t use their voice to control their devices.

If you own a MacBook, the Samsung monitor pairs incredibly well, which was a welcome surprise. It supports AirPlay, albeit with lag on the M8 display screen. When plugged in using the M8’s included USB-C to USB-C cable, I did have to adjust the settings so my M8 desktop view would not be comically small.

It’s easy to put a keyboard under the monitor and you can realistically place your laptop underneath. My compact Logitech K380 was easy to pair and use, and larger keyboards shouldn’t be a problem when it comes to fit. I tucked my MacBook Air below the display or off to the side, with the long USB-C to USB-C cable easily connecting the two.

Although it works great as a separate monitor and as a TV in a pinch, trying to use the TV function and the display at the same time in Multi-View is not consistent between features. I couldn’t look at a webpage using Tizen and access streaming apps comfortably at the same time. It was possible while using AirPlay, but it’s still not a seamless experience. Perfecting this could be an incredibly useful feature for those who stay focused by watching a Netflix show in the background while working, or for those who want to look at a walkthrough guide online while playing a game on their console.

So, who should buy the Samsung M8 monitor?

The M8 functions better if you live in a place with space for a proper desk set-up. It’s too small to use as a standalone TV in the living room and too large to fit on a small desk with a separate laptop. If you really need one device, the M8 could save you some space. However, you’re not saving much by getting this combo device. This 32-inch Samsung monitor plus this very basic 4K Samsung TV  is only $122 more expensive than the M8’s current $599.99 price tag.

If dorm desk space allows for it, the M8 could be a great option for college students. It’s a great external monitor to use for a big research project, with enough sound and visuals for unwinding with some reality TV. I’m not sure how useful the monitor is for the work-from-home crowd Samsung is trying to woo here, considering some companies will send you a monitor as part of the job.

Although this display has some quirks, don’t discount the M8 completely. It’s a great 4K display and gets the job done for streaming. However, trying to watch a show while surfing the internet at the same time is difficult. If the company makes this more seamless and includes an improved Tizen OS in the follow-up device, the Samsung M8 monitor could score a home run on the smart TV-meets-display concept.