The Logitech Pop Keys is a cute mechanical keyboard with productivity features to boot. 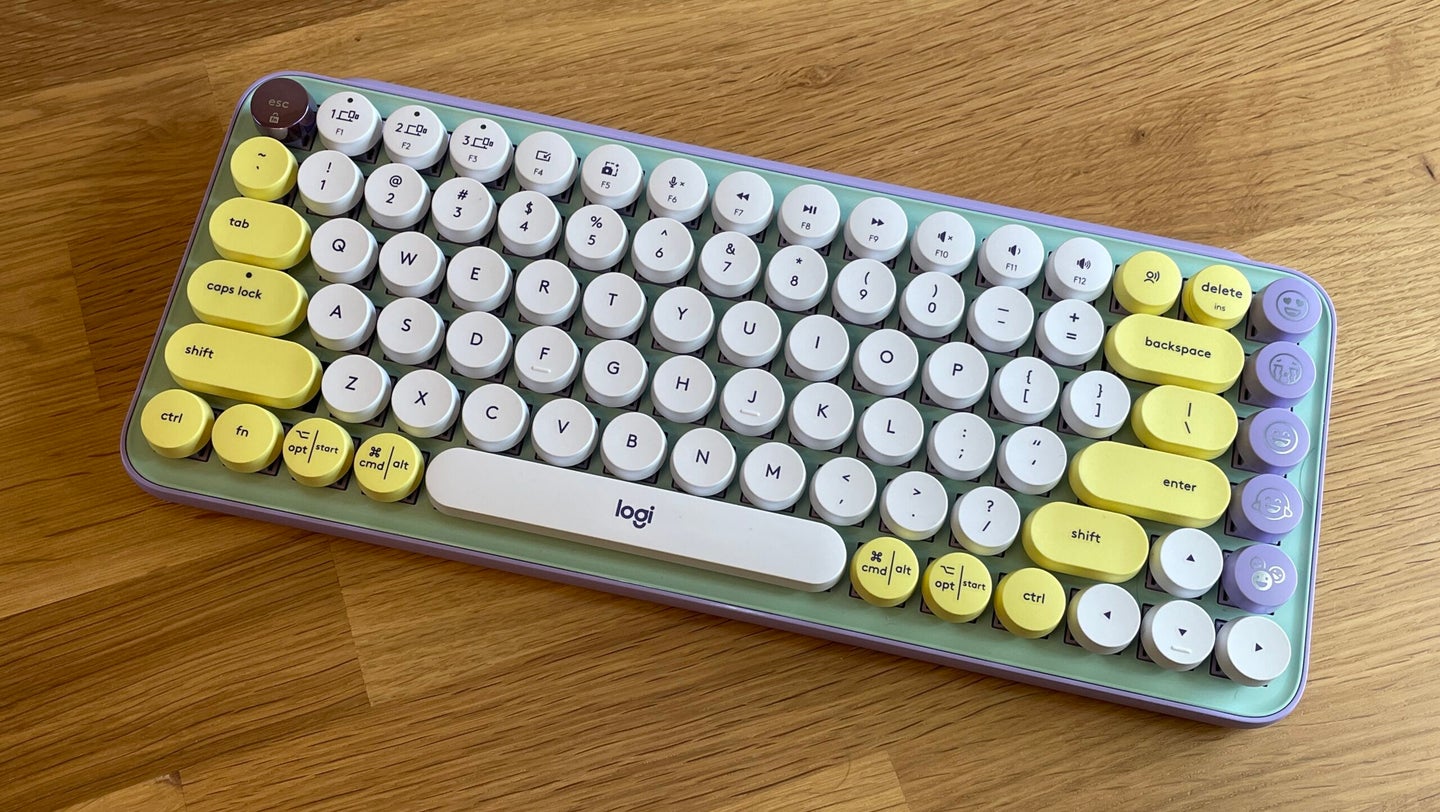 The Logitech Keys, a style-forward wireless mechanical keyboard from Logitech, has a lot to offer. Mike Epstein
SHARE

The Logitech Pop Keys is the cutest of cute keyboards. As part of Logitech’s new creator-focused “Studio” line of peripherals, the multicolored wireless mechanical is dressed to impress with colorful, synchronized components, round typewriter-style keycaps, and customizable keys signified by emojis (and extra emoji keycaps in the box).

At the same time, it also has a few powerful features from Logitech’s MX productivity peripherals line. On paper, it strikes a lovely balance between personality and power. In practice, the situation isn’t quite so clean. The Pop Keys doesn’t have as robust a configuration platform as Logitech’s MX line and its round keycaps have some typing-related drawbacks. Despite those flaws, it’s still a relatively distinctive offering for typists who want a keyboard that looks and feels special.

The Logitech Pop Keys is the cutest of cute keyboards. The multicolored wireless mechanical takes cues from the enthusiast world of customizable mechanical keyboards. In keeping with enthusiast keyboard fashion, the 85-key design is crammed into a single block of keys, without the kind of spacing you’d normally find on a TKL-sized keyboard. At 12.5 by 5.31 by 1.66 inches (WDH), it’s slim but deceptively large. That’s a strength, though, not a weakness. Most keyboards that look and feel like the Pop Keys tend to be smaller and have fewer keys. The “60-percent” form factor, popular among enthusiasts, usually has between 60-65 keys, which means ditching the function row, the arrows, and other useful keys. If you like how your friend’s custom keyboard looks, but can’t bear to part with the utility of having easy access to what manufacturers normally consider standard, then the Pop Keys offers an easy half-measure.

And it is genuinely pleasing to look at. The Pop Keys come in three different designs: the lavender, yellow, and mint pastel-laden “Daydream” (pictured); a black and yellow “Blast” edition; and the “Heartbreaker” in shades of red and pink. In a keyboard market dominated by sleek, Apple-esque productivity designs and sharp, angular gaming keyboards, the softer, rounded Pop Keys stands out. Following enthusiast trends, it trades in backlighting for an “open” design where the board’s mechanical switches are open and clear to see. The design of the components is the aesthetic, and that’s pretty cool.

What kind of switches does Logitech Pop Keys have?

The Pop Keys features Logitech’s brown switches. Tactile switches, which feature a strong tactile bump without the tinny clack of “clicky”-style switches, require a bit more force to push them down, which may rankle a pro esports player but provides a better overall typing feel. Typing on the Pop Keys generally feels great once you find your footing.

For those new to mechanical keys, they do make more noise than a virtually silent membrane or scissor-switch keyboard. I personally don’t find the sound distracting and many microphones can filter out the noise for remote video calls. Mechanical keyboards could be distracting in an open-plan office, in general, but the clack of the keys is no more distracting than ringing phones, co-worker chatter, and other everyday sounds of working in public.

So … are those rounded keycaps really a problem?

While I am generally a fan of the Pop Keys’ focus on style, there is an element of the design that crosses a line, impeding functionality to a degree. It turns out that, even after spending years reviewing dozens of keyboards, I’ve never reviewed one with round keycaps. It turns out they take a bit of getting used to.

Since the keyboard base is square and the keys are round, there are very small gaps between the keys directly adjacent to each other and wider gaps between the keys diagonal from each other. I personally found that it took a fair amount of time for me to get used to the different gaps. For my first week or so with the keyboard, I found myself making more typing errors, similar to what happens when I’ve switched to an ergonomic keyboard. Most of the time, I’d find myself hitting two keys instead of one—going for the “j” I’d type “jh”—since the rounded edges of the keys are so close to each other. Occasionally, I’d hit the rounded-off corner of a key and my finger would teeter over the larger diagonal gaps.

The Pop Keys is not the first keyboard to evoke the old-school styling of a typewriter by using round keycaps rather than square, so this is not a new concern. It’s also worth noting that, as with other types of keyboards with alternative layouts, I did adjust eventually. Still, for power users and people who want to hassle even the slightest semblance of a hassle, it’s worth knowing going in that there will be an adjustment period. Is the Pop Keys’ look worth the growing pains? That’s up to you.

What else does the Logitech Pop Keys do?

While the aesthetic design is at the heart of the Pop Keys novelty, it’s also a very appealing technical package. The wireless design supports Bluetooth Low Energy and a more stable 2.4GHz wireless connection via a Logitech Bolt dongle. As with Logitech’s MX line, the Pop Keys offers the ability to connect to up to three devices, one via dongle and two via Bluetooth, and swap between them on the fly via hotkeys on the function row.

It also supports Logitech Flow, a software-driven feature that lets you wirelessly move between multiple connected devices with a single mouse and keyboard. (You can only use Flow if you also have a compatible mouse.) Despite the fact that it’s been around for a few years, Flow is generally reserved for Logitech’s best productivity gear, so that’s a sign of the Pop Keys place in the Logitech keyboard food chain.

Does it come with any software?

You can configure the Pop Keys on Windows and macOS using Logitech Options, the configuration app for the company’s productivity mice and keyboards. Options allow you to use Logitech Flow if you have the right mouse, but its main function for the Pop Keys is the ability to customize the emoji keys on the side of the keyboard. While the keys default to the emojis shown on the keycaps out of the box, you can technically assign these keys to any emoji, key, macro, or a wide range of system-level commands. You can also change most of the keys in the function row. (F1-F3 are locked to ensure you can always switch to each wireless channel.)

You can create app-specific keyboard layouts with different customizable keys, which is especially nice if you plan to use the emoji keys for system-level functions.

I love the idea of having specific emoji keys. Like ‘em or hate ‘em, emojis have achieved a level of ubiquity where it’s time to start making room for them on the keyboard. That said, the keys would not be all that useful without Options giving you the ability to change them. Everybody has different go-to emoji that they’d like on hand. And, if you don’t use them, the configuration app opens the door to all kinds of other shortcuts, from opening your favorite apps to taking screenshots, and more.

That said, the configuration options are fairly limited compared to gaming peripherals and even some high-end productivity keyboards—most gaming keyboards let you change any key to almost any function—but this is about all you need for day-to-day work and play.

Tell me about battery life

Normally, this is the part where I ding Logitech for relying on disposable AAA batteries to supply the Pop Keys with power. In general, I don’t approve of using disposable batteries, even when it’s cost-efficient or leads to less charging time, because it also leads to more e-waste. However, I will make an exception in the Pop Keys case because, according to Logitech, the Pop Keys can last for up to three years on a single pair of batteries. This isn’t all that surprising: Backlighting often cuts the battery life in peripherals by 50-60 percent. Still, the number is striking and, with regards to the environment, means that you’ll likely only change the Pop Keys batteries once or twice in its lifespan.

What about a mouse?

Unsurprisingly, Logitech has a Pop Mouse to go with the Pop Keys, which comes in the same three color schemes as the keyboard. While I understand the desire to pair the keyboard with a matching mouse to complete the look, I’m personally not a huge fan of the Pop Mouse and would recommend most people break up the set.

The $39.99 Pop Mouse is a miniature travel mouse that provides very little ergonomic support. And while it has a couple of tricks up its sleeve, including the same multi-device pairing as the Pop Keys and Logitech Flow support, not all of the flourishes land. (I like having an emoji menu key on the keyboard, but I do not want one on my mouse.) Overall, though, mouse ergonomics are simply too important. A black or grey MX Master 3 or MX Vertical will look just fine next to the Pop Keys and you’ll have a much better experience.

So, who should buy the Logitech Pop Keys?

The Logitech Pop Keys is a surprisingly great mechanical keyboard. Despite putting its flashiest foot forward, the $99.99 keyboard has a comfortable typing feel, useful customizable keys, and advanced features for multitaskers. Despite a few small shortcomings that would keep it from hopping to the top of the productivity keyboard pile, it’s still a really neat choice for anyone who cares about how their keyboard looks and feels but also wants that powerful productivity-focused polish.