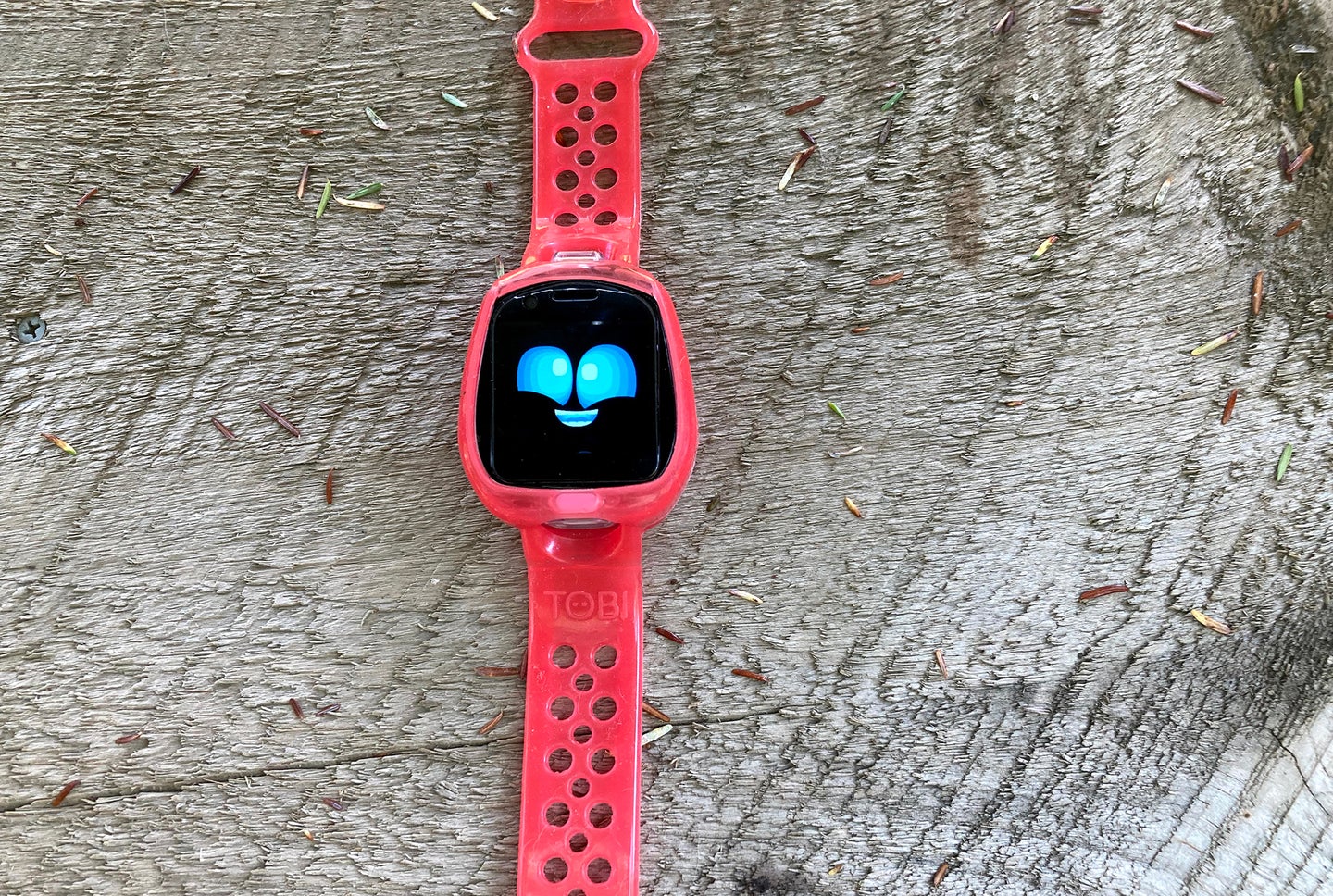 Tobi the Robot is engaging and energetic, inspiring your kids to move. Andrew Waite
SHARE

When it comes to my kids and technology, I often feel at a loss. Technology can engage and stimulate kids in ways our parents never imagined (and probably wish they could have plunked in front of us). And yet, watching my daughter zoned out in front of a “CoComelon” cartoon makes me want to swear off screens entirely. So when I tested out the Little Tikes Tobi 2 Robot Smartwatch, I didn’t entirely know how I would feel.

On the one hand, it is yet another screen-based device reaching for—and often clutching tightly—my preschool-age daughter’s attention. On the other hand, many of the smartwatch’s apps and activities are designed to either test her mind, get her on her feet—or both. The Tobi 2 Robot Smartwatch, complete with its lively robot who laughs and cries and demands to be played with—literally chiming in with activity and game ideas—accomplishes all of this. And while I did find the Tobi 2 Robot Smartwatch, like many of the best kids’ smartwatches, to be more in line with kids’ toys than school supplies, I couldn’t completely overlook some notable benefits.

What is the Tobi 2 Robot Smartwatch?

The Tobi 2 Robot Smartwatch truly lives up to both parts of its name. It’s a kids’ smartwatch that can track steps, encourage you to run around, take photos, and send messages. It also has most of the usual functions you’d have on a smartwatch, including a timer, alarm, calculator, and calendar. But its personality—and, oh boy, does it have personality—comes from the Tobi robot face. The Tobi robot can cycle through more than 100 expressions, and frequently speaks gibberish, demanding to be cared for and played with through gestures like shivering and clickable thought bubbles that lead to a menu of activities. It reminded me of the digital pets that were popular when I was a kid (Tamagotchi anyone?).

A follow-up to last year’s Tobi Smartwatch, the Tobi 2 Robot Smartwatch offers many of the same games and activities as the original, while adding to the connectivity between Tobi Robot smartwatches. In addition to sharing voice messages and emoji, the Tobi 2 lets kids send and receive images and videos, and play games head-to-head when two Tobi 2 watches communicate via an ad-hoc Wi-Fi connection. (Plus, kids can use the Tobi 2 as a remote with the separately available Tobi 2 Interactive Karaoke Machine or Tobi 2 Director’s Camera, if you decide to invest more in the Little Tikes ecosystem.)

Like a lot of kid-friendly tech, the Tobi Robot 2 is purposefully oversized. At about 1.5 inches by 1.75 inches, the LED touchscreen face itself isn’t actually much bigger than a regular smartwatch’s face, but the housing around it extends to accommodate metal flippers that the Tobi robot shows off when seeking attention (it reminded me of a pinball machine). My 3.5-year-old daughter, still a bit too young to use the watch completely on her own, loved it whenever those fins popped out. The silicone band, which is available in bright colors like red and purple, is 1 inch wide and dotted with 10 rows of holes that allow for tighter and looser fits. It expanded to fit my wrist and tightened enough for my 3.5-year-old daughter’s wrist. The back of the face is transparent, letting kids see into the smartwatch’s inner workings.

There are two onboard cameras, both capable of shooting 640- by 480-pixels photos or 320- by 240-pixels video. The first camera, on the face, is motion-activated and primarily for selfies. The second, along the top edge, is an outward-facing P.O.V. camera better for taking footage of the rest of the world.

A physical button below the face lets kids toggle between screens—from Tobi’s face to a clock to a menu of available functions. Below that home button is the micro-USB charging port. Also included is a color-coordinated case that features a clip built into the back that lets the watch attach to a belt or stand on a bedside table.

Setting up the Tobi 2 Robot Smartwatch

The Tobi 2 has an intuitive setup process that puts parents in control. Hold the menu button for five seconds to wake Tobi up. Select your language, and then set the date and time using scrollable menus on the touchscreen. Then name your device by cycling through the alphabet, numbers, and set of symbols to change each unit. Parents can set a passcode, choose whether they want to turn on Wi-Fi to let it talk to other Tobi 2 watches, and limit their kid’s screentime. I opted for an hour. When my daughter hit the limit, the watch locked its games and stopped showing Tobi’s face unless the passcode was entered.

Once set up, it was playtime. If you’re on the clock screen, you can swipe to select from more than 50 watch faces—a kind of game in its own right. My daughter, of course, went with a rainbow face, but the options range from simple analog clocks to a desertscape to themes with dogs and cats.  Meanwhile, on the application menu, four options are displayed at once, and you can swipe between four screens. This lets you do everything from take photos to test your memory to track your steps.

On the Tobi screen, you can interact with the gibberish-speaking robot. Tobi will show icons with activity ideas, and if you’re on that screen the robot won’t stop bugging you unless you’re still for 25 seconds. For many kids, that means Tobi simply won’t stop until the kid—or, let’s face it, the parent—decides it’s time to turn the watch off completely.

Features of the Tobi 2 Robot Smartwatch

Tobi the Robot is literally the face of the watch. The digital friend is certainly fun and spunky, but I’d be lying if I said that little robot never got under my skin. When the watch is set to the Tobi face, the robot makes more than 100 expressions—from a sly smile and plucky grin to a wistful wink and a pensive pursing of the lips. Tobi behaves like a digital pet. Icons pop up with Tobi’s needs—Tobi can be hot, cold, hungry, in need of teeth brushing. Much like my daughter, come to think of it. And if you don’t oblige Tobi’s needs, you’ll be informed. For instance, before realizing that Tobi was cold and wanted a hot water bottle or a scarf, I offered to play soccer. That produced an “uh-uh” and a head shake. Tobi also suggests dance parties and displays the step tracker, encouraging the wearer to walk or run. The gamified approach to fitness is definitely effective. But as with any helpful yet slightly irksome friend, it’s best to hang out only in small doses.

Like any good fitness tracker, the Tobi 2 Robot Smartwatch is designed to get you moving.  It features a built-in pedometer that logs your steps and rewards progress with unlockable “Tobi World” room decorations, letting you decorate different rooms that Tobi will come to check out. (Playing games and interacting with Tobi also earns you decorations.) All in all, unlocking the decorations is fun and motivating, but the games themselves are fun enough on their own to get you off the couch. For instance, “Freeze Dance” gives you points when you groove to the beat and successfully hold still when the music stops, and Robot-o-Box lets you earn coins as you raise your arm to spar with a robot. Contrast that to a smartwatch that simply buzzes when you reach a set step total, and it really doesn’t compare.

Also important for your health, the watch can encourage you to take a deep breath. While it won’t monitor your oxygen levels like Dad’s Amazfit Bip U Pro, it promotes slow and steady breathing by having wearers mimic Tobi.

Like many of the best smartwatches for kids options, the Tobi 2 Robot Smartwatch can shoot videos and photos. The watch can store up to 3,000 photos and up to 30 minutes of video. It all looks grainy compared to what you’d shoot on a phone, but it’s more than functional for an elementary school-aged kid. Plus, you can spruce up photos with digital borders and stickers, like an outer space frame and an ice cream cone sticker.

Do you see what I see?

The wireless connection you can establish between two Tobi 2 watches only works if the devices are nearby. I was provided two watches to test these features out but when I brought one watch out to the backyard and left the other in the front of the house, the two devices couldn’t communicate. When close enough, however, there were lots of things they could do. I could beam photos, videos, voice memos (via an onboard microphone), and emoji—which Little Tikes bills as messages—directly to my daughter’s watch. We could also play a couple of games, Tic-tac-toe and a basketball game, though these options felt thin, especially when the activity games, like freeze tag, seem like a great fit for two-player or group multiplayer.

Power up the robot

So, who should buy the Tobi 2 Robot Smartwatch?

If you’re hoping to draw your elementary schooler’s attention away from the TV toward a screen that promotes more engagement and active participation, the Tobi 2 Robot Smartwatch can be an effective distraction. Tobi the Robot is certainly a captivating and engaging character, and many of the built-in activities will work your kid’s brain or get your kid to work out in a fun, innovative way.

​​My honest assessment of this smartwatch for kids is that when children want to play with Tobi the Robot rather than just play the games, parents may want to flee the room after a few minutes. The robot’s clicks and coos and laughter are just too much. But, then again, my daughter is always telling me to “Go away, Daddy,” when I’m trying to brush her hair or put on her shoes. So perhaps with the Tobi 2 Robot Smartwatch on her wrist, she won’t have to bother verbally banishing me. And at least when I leave the room I can feel good that the smartwatch asking for her attention seems to have her health and well-being in mind. “CoComelon” on the other hand…