21 Emotions For Which There Are No English Words [Infographic]

That sort of painful, sort of bittersweet, sort of wistful feeling you get looking out the window or driving at night or listening to a far-off train whistle? There's a word for that in Japanese. 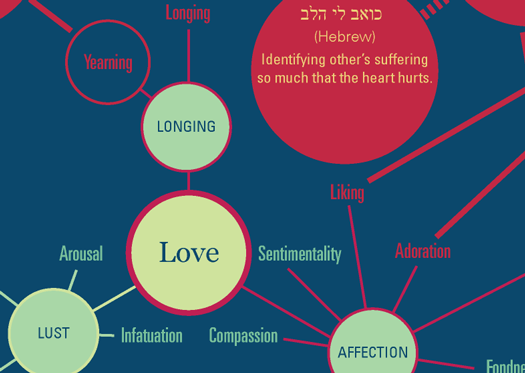 Few of us use all–or even most–of the 3,000 English-language words available to us for describing our emotions, but even if we did, most of us would still experience feelings for which there are, apparently, no words.

In some cases, though, words do exist to describe those nameless emotions–they’re just not English words. Which is a shame, because–as today’s infographic by design student Pei-Ying Lin demonstrates, they often define a feeling entirely familiar to us.

Lin solicited the list of “unspeakable” words from colleagues at London’s Royal College of Art, and found that their definitions in English usually came down to something like, “it is a kind of (emotion A), close to (emotion B), and somehow between (emotion C) and (emotion D).”

Next, to visualize the relationship between the foreign emotion-words and English ones, Lin used a linguistics model to map out five basic emotions (large yellow circles), along with several descriptive words related to each (smaller green circles). Finally, she used her sources’ descriptions to place the new/foreign words on the English map:

A couple of other good ones that didn’t make this map [via So Bad So Good]:

Litost (Czech): a state of torment created by the sudden sight of one’s own misery

Schadenfreude (German): the pleasure derived from someone else’s pain

Lin also mapped five emotions that are unique to the computer/internet age, and also–so far, at least–unnamed in English.