A stunning archaeological find--confirmed by DNA--to light up this winter of our discontent. 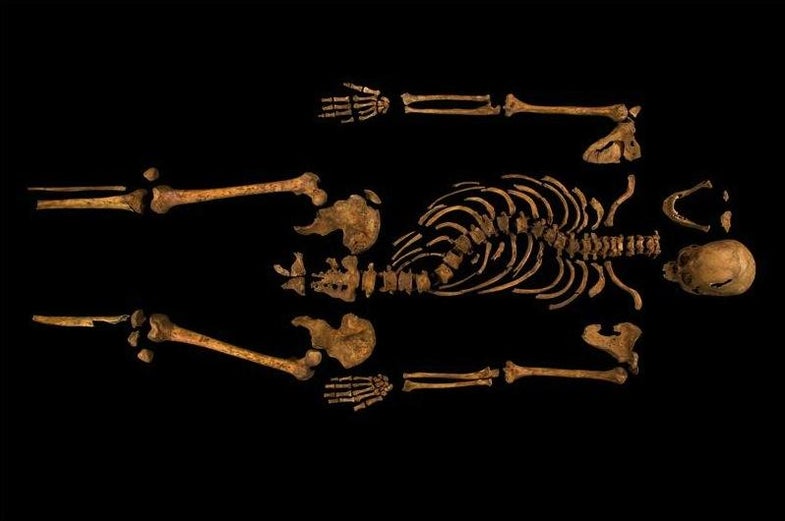 Britain’s most reviled king, the short-lived monarch Richard III–last of the House of York, last of the Plantagenet dynasty, final loser of the Wars of the Roses, and benefactor of Cambridge University–has finally been identified. He lay buried beneath a nondescript English parking lot until September, when the remains were exhumed. Today, researchers at Leicester University confirmed that the bones they found are indeed the remains of Richard III, the last English king to die in battle.

DNA analysis matched the skeleton to two of Richard III’s modern descendants, according to the researchers. One is a Canadian-born furniture maker named Michael Ibsen and the other person wants to remain anonymous. Based on this and incredibly strong circumstantial evidence, the researchers at Leicester said they concluded beyond a reasonable doubt that the remains were in fact Richard III’s.

“Rarely have the conclusions of academic research been so eagerly awaited,” said Richard Buckley, the lead archaeologist on the project. The team also used radiocarbon dating, genealogical evidence and historical sources to improve their record.

The bones were exhumed from a city council parking lot in September, which covers the grounds of an ancient priory called Grey Friars Church. Historical legend held that Richard was buried there after his death, at age 32, in the Battle of Bosworth. A new documentary, “Richard III: King in the Car Park,” chronicles the dig and premieres tonight in the UK.

Richard III has long been reviled, thanks in no small measure to Shakespeare’s unflattering account of his life. The playwright casts him as a devilish hunchback hellbent on power — he reads lines like “March on, join bravely, let us to’t pell-mell; If not to heaven, then hand in hand to hell” — whose demise, ending the Wars of the Roses, ended the Middle Ages in England and paved the path for the Elizabethan age. His reputation is certainly a result of his own actions (like locking his nephews in the Tower of London) though it’s also at least partly due to a slander campaign by the Tudors, his successors. But he did support measures to help the poor, and he and his wife, Anne, also endowed King’s College and Queen’s College at Cambridge, according to the Times. 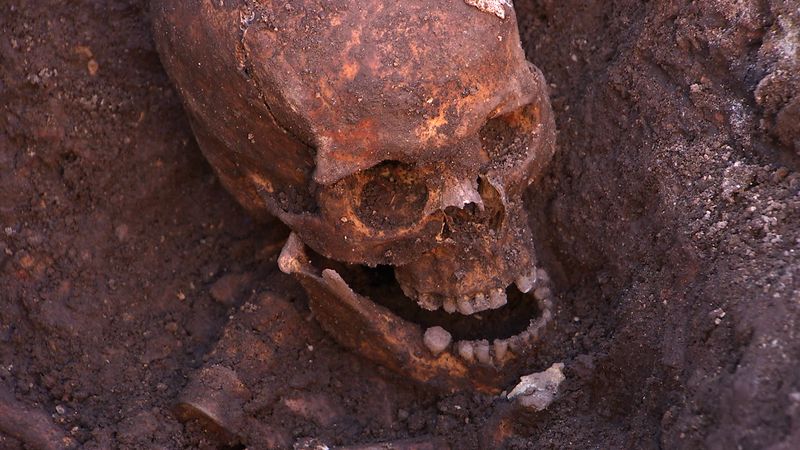 The skeleton and its clear evidence of wounds are strikingly similar to legends of Richard III. There are 10 wounds in all, 8 of them in the skull and at least a few of them possibly inflicted after death for the purpose of humiliation. He had severe scoliosis, or curvature of the spine, which you can see in the skeleton.

Historical accounts say he perished when his horse got stuck in the mud at Bosworth Field, exposing him to his attackers–A horse, a horse, my kingdom for a horse! Shakespeare wrote. Legend says a Welshman struck the death blow with a halberd, and the blows were reportedly so violent that the king’s helmet was driven into his skull. Leicester forensic pathologists say trauma to the skull indicates he died after one of two significant wounds to the back of the skull–one a possible halberd blow, and one from a sword.