FAA Bans Drones At The Superbowl

And anywhere within 37 miles of the stadium 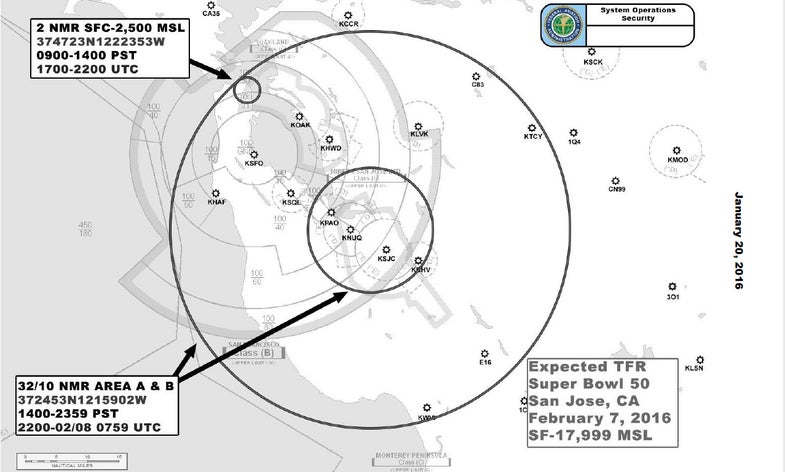 Planning to capture some of the 50th Super Bowl excitement by drone? Probably wise to think again, because that’s super illegal. The FAA is declaring the sky above Levi’s Stadium in Santa Clara, California off-limits for unauthorized aircraft, in two huge sweeping circles of overlapping sky. They did the same thing for last year’s Super Bowl in Phoenix, Arizona.

At a site the FAA set up for the event, complete with a GeoCities-era animated reflective logo and a “fly2sb50” url, people can find information about where not to fly. The “Notices to Airmen” specify that flights up to 17,999 feet and within a 32 nautical mile radius (or 37 statute miles) of Levi’s Stadium are off-limits for aircraft from 2pm to midnight on February 7th, the day of the game. There’s also an inner core with an 11.5-mile radius from the stadium where the FAA has particularly advised against flying. These notices are subject to change as the event gets closer.

Rules like this are designed to protect the sky above the game (and, presumably, the people in the stadium) from rogue aircraft, including drones. The FAA depends on local police forces to catch violations like this, and police knowledge of unmanned aircraft law is often dependent on whatever information they’re provided by the FAA. The prohibition means people miles and miles and miles away who want to simply fly their drones on a Sunday may be violating the law when they do.

Update February 3rd, 2016 When the FAA first sent out the Super Bowl flight restrictions, they didn’t specify unmanned aircraft, though the regulation seemed to cover airspace in which drones fly. In a statement released today the FAA confirmed that the 32 mile radius restriction applies to drones too. In their previous release about the no fly zone, they specified nautical miles, which are slightly longer than statute miles. We are continuing with that assumption here, since it seems odd that the FAA would have two separate 32 mile restrictions in place:

The FAA also released a short video encouraging people to leave their drones at home on game day. Or inside your house, if you’re one of the roughly 5 million Americans who live within 32 nautical miles of Levi’s Stadium. Watch that ad below.