Megapixels: A rover snaps a pic as it hops along the surface of an asteroid

Japan landed two spacecraft on the surface of Ryugu. 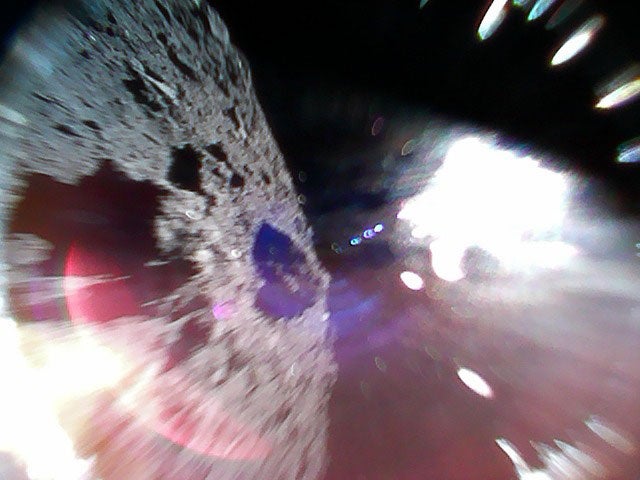 On Saturday afternoon, two rovers known collectively as the MINERVA-II1 (MIcro Nano Experimental Robot Vehicle for Asteroid, the second generation) separated from the Hayabusa-2 spacecraft and headed for the nearby surface of the gemstone-shaped asteroid Ryugu.

One of the fully-autonomous rovers captured the image above as it hopped across the surface soon after landing. You can see Ryugu to the left, and a reflection of the sun—that bright spot to the right.

If it looks a little blurry, that’s because the rover was in motion when it snapped the magnificent pic.

The gravity on Ryugu is so faint that engineers had to get very creative when thinking of ways to move the rovers around the surface. A rover like the ones used on Mars would simply float away as soon as its wheels started turning. Rolling on the rock was out. But hopping was still a perfectly viable possibility for the tiny rovers, which are only 7 inches across and 2.7 inches tall.

When the robot is ready to move, a motor inside rotates, propelling the rover off the surface. In low-gravity, that small jump is enough to send the rover careening through space, hanging above the surface for 15 minutes and traveling nearly 50 feet before landing.

The picture above was taken mid-hop as one of the rovers skimmed over the surface. A second pair of rovers will deploy next year. You can keep track of the current status of the Hayabusa mission here.