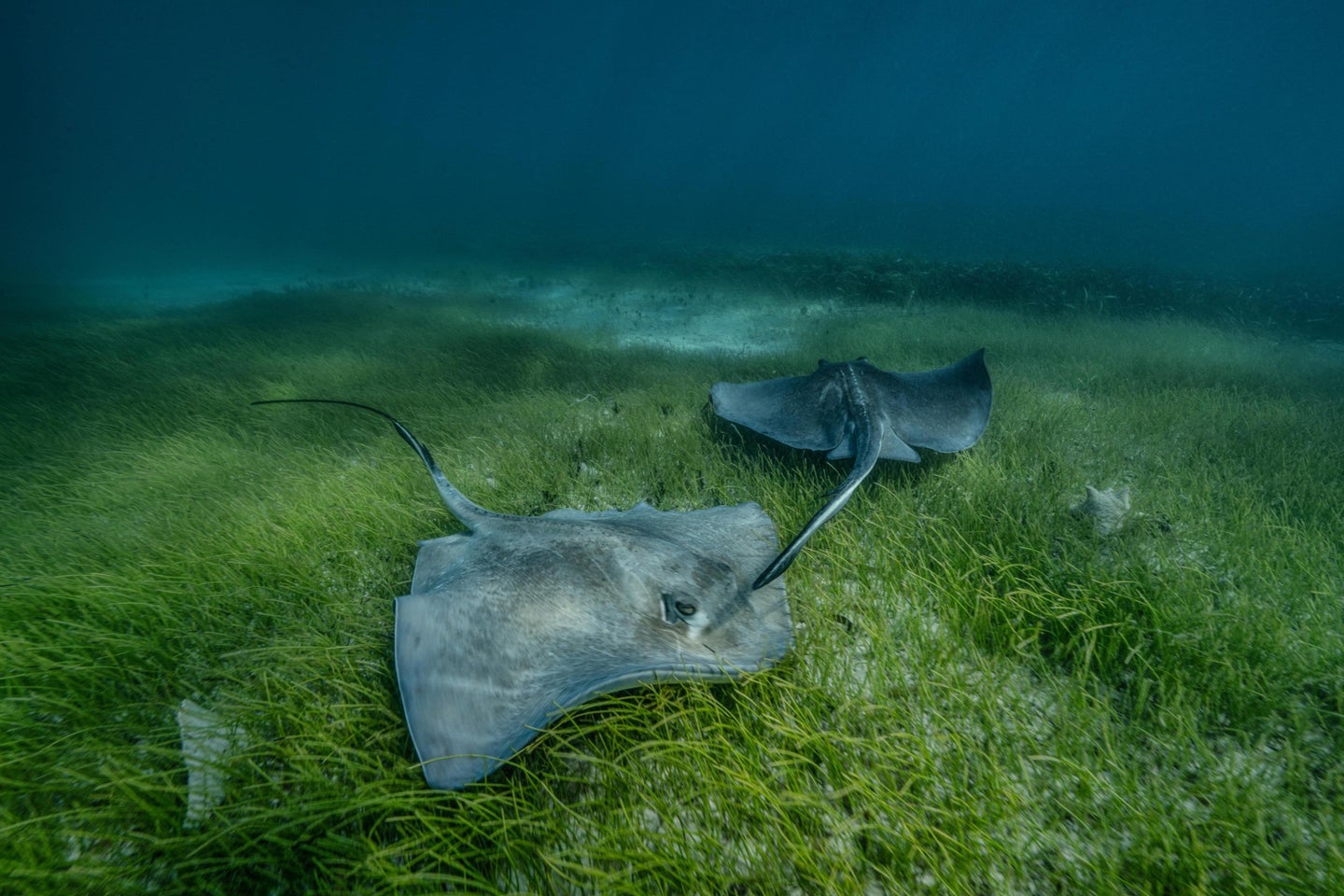 Seagrass meadows are more than just blue carbon sinks, and act as feeding and nursery grounds for an abundance of marine life–such as elasmobranchs like sharks and rays, and economically and culturally significant species like Queen Conch. Cristina Mittermeier and SeaLegacy, 2021
SHARE

Given their fierce and carnivorous-sounding name, it might be surprising to find out that tiger sharks (Galeocerdo cuvier) spend a lot of their time swimming with lush marine greenery.

A study published today in the journal Nature Communications, details how tiger sharks helped a team of researchers map out a giant meadow of seagrass. The data from underwater shark-piloted cameras helped the team discover one of the largest seagrass meadows on Earth, located in the warm waters of The Bahamas.

Researchers from institutions including Carlton University in Canada, King Abdullah University of Science and Technology in Saudi Arabia, Trinity College in Ireland, and Beneath the Waves, a Virgina-based conservation nonprofit, used satellite tags to track individual tiger sharks as they traversed the Bahamas with bio-logging cameras. According to the authors, the study shows the first-ever use of 360-degree cameras on a marine animal.

“In confirming the various benthic habitat types in The Bahamas, and their corresponding use by sharks, we found that tiger sharks spent around 70 percent of their time swimming over seagrass meadows,” says Wells Howe, a program manager on Beneath the Waves‘ Blue Carbon project, in an interview with PopSci.

The sharks allowed the researchers to see into areas that aren’t easily accessible by humans to map the seagrass meadows. The satellite-tagged tiger sharks swam more than 2,485 miles in both regions of The Bahama Banks, located near Andros Island, Grand Bahama, and Great Abaco. Since they’re sharks, these big fish can explore deeper areas than those surveyed by humans.

“The tiger sharks extending well below the depth limit of seagrass and further into the interior of the vast Great Bahama Bank, areas not logistically possible for human access,” Howe explains. “When reviewing the camera footage, the biggest notable behavior was just how much of their time is spent patrolling seagrass meadows.” Howe is also a co-author of the new study.

Swimming in the grass helped the team map out a seagrass meadow that was even bigger than they had imagined. The Bahamas Seagrass Meadow is one continuous ecosystem that spans 35,521 square miles across The Bahama Banks. This study shows a 41 percent increase from the previous projected global estimate of seagrass.

The findings also suggest that all of this greenery plays a major role in absorbing some of the excess carbon in the ocean due to burning fossil fuels. One study suggests seagrass can remove carbon 30 times faster than the rainforest.

“When referred to global seagrass carbon stock estimates, our results indicate that seagrass in The Bahamas may contain 19.2 to 26.3 percent of all the carbon sequestered in seagrass meadows on Earth,” says Howe.

All of this seagrass also supports the ocean’s biodiversity and fish stocks.

“In The Bahamas, for example, these meadows serve as key nursery grounds for a host of commercially relevant marine species such as the Nassau Grouper, Queen Conch, Lobster, Manatees, and also they serve as key habitat for threatened species like shark and sea turtles,” says Beneath the Waves project manager and study co-author David Harris in an interview with PopSci.

Measures to protect seagrass are included in the Climate Change and Carbon Market Initiatives Act passed in May by the Bahamian Government. The team will continue to work with government support to understand seagrass’ role in supporting the entire ocean.

“The health of the ocean is clearly linked to the ocean’s top predators,” says Harris. “By protecting these animals, and learning about their daily lives, we have discovered one of the largest marine findings in the ocean over the last 20 years. Imagine what else we will find as we continue to protect and partner with sharks!”