A long time ago when it was warmer up north, one corner of Greenland was actually green and teeming with life. 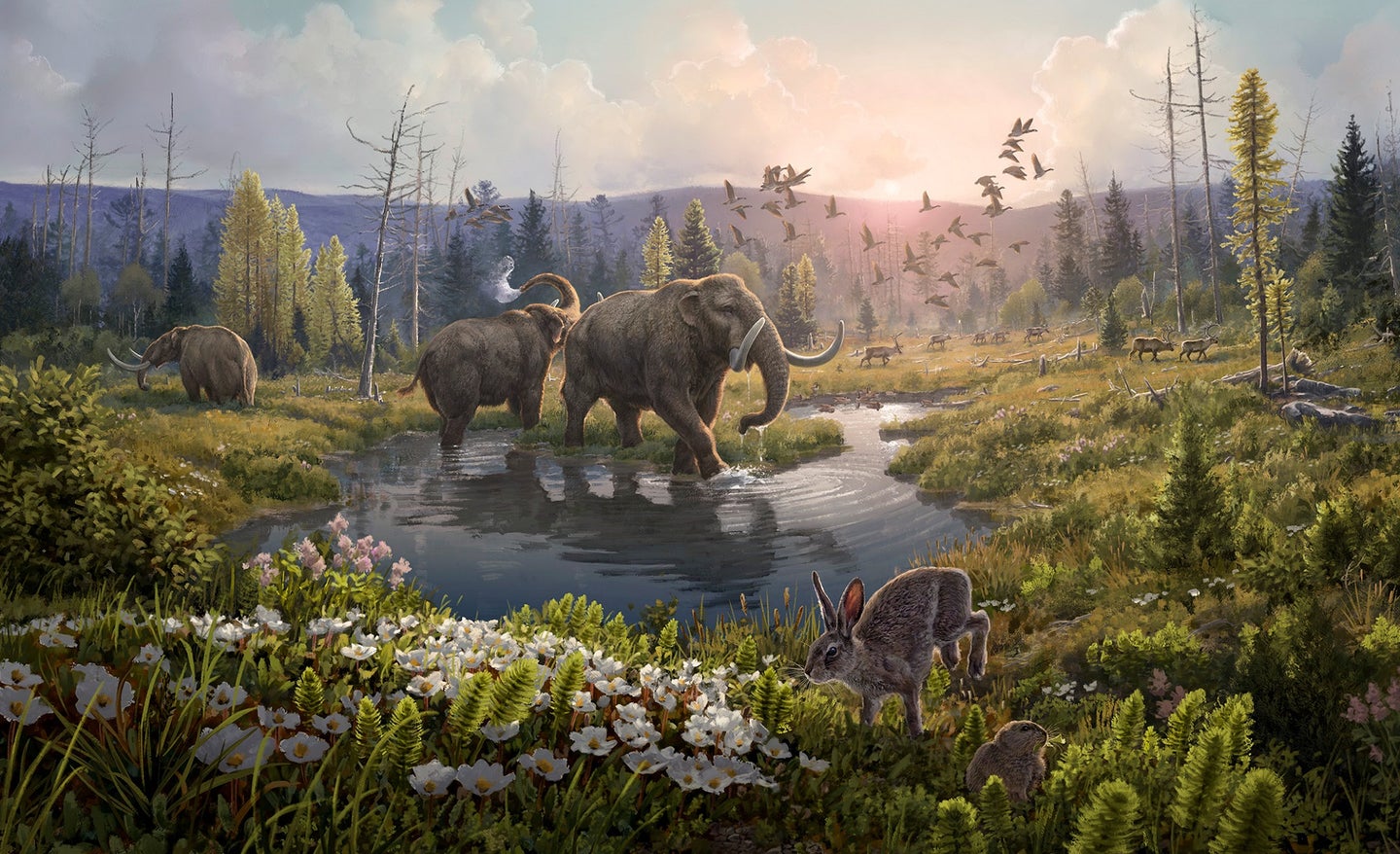 Despite its verdant name, Greenland is hardly the place you’d expect to find a garden. Larger than Mexico, the island is home to fewer than 60,000 people, most of whom live along the southwestern coast. And to no surprise: Most of the country’s vast interior is clad in ice, and in many places, the air is too dry to even make snow.

On the island’s desolate northern coast, however, researchers have pieced together an entire ancient ecosystem that looks drastically different from today’s. Long before modern humans arrived on its shores, mastodons walked through leafy forests and crabs thrived along corals.

Instead of using fossils to paint this lost world, geologists and biologists used a different kind of brush: 2.4 million-year-old DNA scraped from the land itself. In a paper published in the journal Nature today, researchers analyzed the oldest genetic material ever sampled to understand what a tiny corner of Greenland would have looked when Earth’s climate was much warmer.

“It shows an ecosystem with no analogue today,” says Eske Willerslev, an ecologist at the University of Copenhagen in Denmark and Cambridge University in the UK and one of the authors of this study.

Any kind of antiquated DNA is a rare find. While scientists usually extract it from living beings, that evidence can fade quickly after death. When an organism is alive, it will shed much of itself—from hair to poop to dead skin and many things in between—into its surroundings. The DNA in that detritus can tell scientists what species it came from, almost like a barcode. Scientists call these traces environmental DNA, or eDNA for short.

“It’s kind of like the forensic analysis that they do in a crime scene,” says Mehrdad Hajibabaei, a biologist at the University of Guelph in Canada who was not involved in the new research. “You can identify organisms that live in that environment.”

The practice, which is still relatively new, has been nifty in monitoring biodiversity, finding new species, and tracking invasive species. But this study is the first to use eDNA to reconstruct an entire prehistoric ecosystem. Greenland’s harsh climate certainly helped.

In most circumstances, eDNA rapidly degrades into the dust of time. But in the right conditions—say, if kept dry, attached to minerals, or frozen—then it can last for thousands or perhaps even millions of years. The eDNA in the Nature analysis came from a place known as Peary Land, a peninsula on Greenland’s Arctic coast, only around 450 miles south from the North Pole.

Willerslev and a few colleagues first dug up samples of Peary Land permafrost back in 2006. At first, they weren’t sure if they would be able to find any surviving eDNA from the substrate. Though the team constantly tried new ways of extracting clues from a haystack of minerals, many of their efforts were fruitless. “We revisited these samples, and we failed and failed until a couple of years ago,” Willerslev says.

So what changed? One of Willerslev’s collaborators, geobiologist Karina Sand, developed better methods for finding the specific minerals that carried eDNA. That allowed the researchers to target bits of clay and quartz, release the eDNA, and sequence it with technology that has come a long way since 2006. It also enabled them to study even smaller samples.

[Related: This is the most-complete woolly mammoth ever found in North America]

Before this paper, the oldest-known DNA came from two woolly mammoths preserved in Siberian ice, estimated to be between 1.2 and 1.7 million years old. But Willerslev and Sand measured their eDNA to be far older: around 2.4 million years old.

Next, they started to sift through their eDNA fragments in search of matches. That wasn’t straightforward, either, given how life has evolved since the start of the Pleistocene. The eDNA in question didn’t have an exact match to animals today—or even animals in the fossil record. As a backup, the scientists had to identify close relatives, which pointed them to prehistoric creatures that have never been traced to the Arctic.

In their eDNA record, they found evidence of mastodons, relatives of modern elephants. They also found signs of animals linked to today’s reindeer, rodents, and geese, and critters connected to ants and fleas. They found remnants of marine life, too, including corals and horseshoe crabs that once lived in the Arctic waters. Some of the smaller animals still live in Greenland today, but for others, it’s just too cold. Indeed, climate records indicate that 2.4 million years ago, Greenland was some 20 to 34 degrees Fahrenheit warmer than it is today.

“This is a very exciting study and an outstanding achievement by the authors, and it shows how far the field has come with regard to developing new tools to study such old environmental systems,” says Linda Armbrecht, a biologist at the University of Tasmania in Australia, who was not an author on the paper.

“It contributes hugely to our understanding of how Earth was different in regions like the Arctic,” says Hajibabaei. What’s more, he adds, this study can show scientists how to study ecosystems in a changing climate.

[Related: Inside the U.S. Army’s plan to build a luxurious city under the Arctic]

Indeed, Greenland’s lost world illustrates a different driver of climate change. Not long after the garden flourished, a sequence of ice ages set in. Arctic temperatures plunged, and Peary Land became more of a barren wasteland.

That situation is now playing in reverse—and much, much faster. All around the planet today, organisms are adapting to drastic warming at unprecedented speeds. Often, scientists assume that species can survive by moving northward from tropical and temperate zones. But that doesn’t mean herds of elephants and reindeer will end up mixing in Peary Land.