Four guys embark on a voyage that may be possible now for the first time. 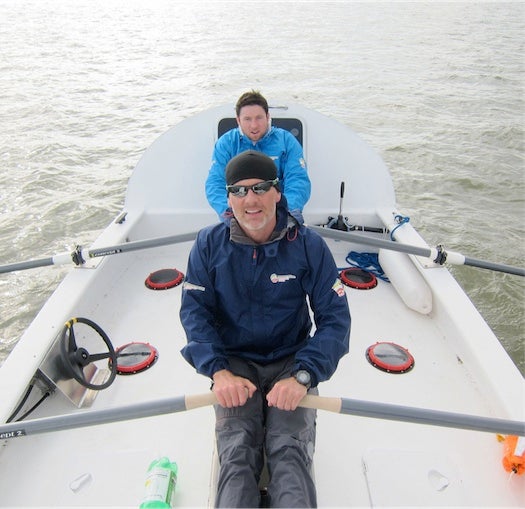 Adventurers Kevin Vallely (front) and Denis Barnett (back) in the boat they're taking through the Northwest Passage. Mainstream Renewable Power
SHARE

I hope they’ve been doing their chest presses. A four-man crew is embarking today to row through the Northwest Passage in about 80 days. The feat has been made possible by global warming, which has freed Arctic waterways of more ice than ever.

The rowers hope to draw attention to the effects of climate change, the Ottawa Citizen reported. A filmmaker is one of the crew. The Guardian’s reporting on the stunt includes a couple of lines about how climate change has affected local communities’ ability to hunt and fish. Perhaps the crew will show those people.

You may have heard of the “Northwest Passage” that Lewis and Clark sought for American ships to sail between the Missouri and Columbia Rivers. That waterway doesn’t actually exist, of course, but a few true water passages between the Atlantic and Pacific Oceans do wind between Canada’s Arctic islands, Greenland and Russia.

Since Roald Amundsen’s first successful boat trip through an Arctic Northwest Passage in 1906, navigating the area has required icebreakers, large ships built for plowing through solid sheets of ocean ice. In 2007, however, U.S. scientists reported that the Northwest Passage was completely free of ice for the first time since satellite tracking began in 1978.

Now, the team of explorers from Ireland and Canada is hoping current conditions will allow them to row through the Northwest Passage in a single season. Others have actually rowed the entire way (!), but not in a single season. Check out the Ottawa Citizen for details on previous Northwest Passage attempts, as well as information on each member of the current expedition.

If they succeed, the latest crew will have paddled for about 1,900 miles in a 25-foot-long boat. They want to row continuously the entire time. Storms, ice jams and polar bears are among the threats they’ll encounter, the Guardian reports.

You can follow their adventures on their blog with the Vancouver Sun. You can get a quick tour of their boat from this video by CBC News (In the video, the men wear caps bearing the name of their sponsor, Mainstream Renewable Power):

The thinning of Arctic ice has fueled some speculation about the Northwest Passage becoming a major world shipping route in the future. That may not happen for some time. As National Geographic reported in 2007, there are no ports along the way and there may be some debate about which country has jurisdiction over the route.