This Goofy-Looking Helmet Is Made Of Old Newspapers 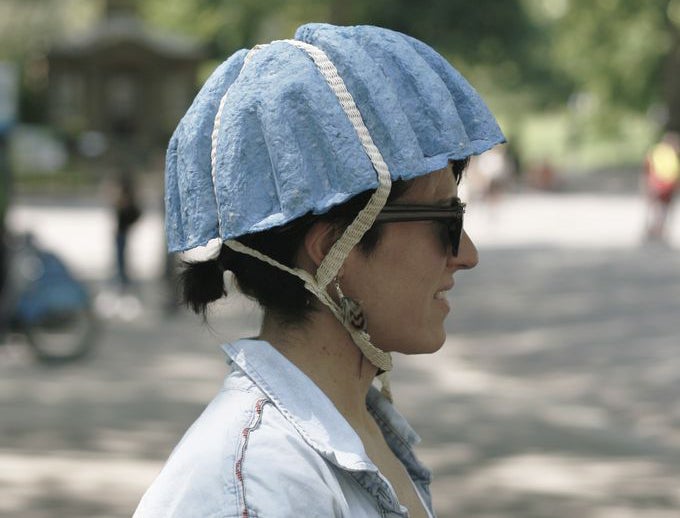 Most safety gear isn’t exactly fashionable, and these helmets are no exception. As a consolation, though, at least you’re saving the environment in addition to your bean: They’re made of recycled newspaper.

The concept for the Paper Pulp Helmet was designed by a group of artists to potentially be a safety side dish to London’s bike share program. It could be sold in vending machines or stores near the docking stations for just £1, the designers say (though the city’s mayor, Boris Johnson, has said in the past that he has no intentions of making helmets available for the program, and that evidence of the “usefulness of cycle helmets is mixed.”)

Creators Tom Gottelier, Bobby Petersen and Ed Thomas, all graduates of the Royal College of Art in London, seem to think more helmets would be plenty useful. To put together the headgear, they made a pulp out of newspapers they gathered in the city’s public transportation network. They mixed in an adhesive, some pigment and organic additive to make the gloop water resistant for up to six hours in the rain, and voila!–molded it into a vaguely fruit-bowl shaped helmet. (Though if you’re biking in the rain for six hours, you’re probably too intense for a newspaper helmet.)

The paper mache head-bowls come in at least two fashionable colors (that correspond to different sizes) and are held in place by a strap that grips the grooves in the structure and snaps in place under your chin. Once they’ve been worn, they can be recycled and made back into pulp for a new helmet.

Cheap, readily available helmets are great if you’re seized with the unexpected urge to grab a Citibike, and presumably any cranium shielding is better than nothing at all. But it’s not entirely clear if this crafty headwear has gone through full safety testing. Creator Bobby Peterson told Metro “We have done some initial drop tests which indicate they are safe,” and the paper writes “the headgear meets stringent European safety standards.” From the pictures, they still look a bit flimsy. Give me a high-impact crash test video and I’ll strap one on happily.

See more of the process in the video below: